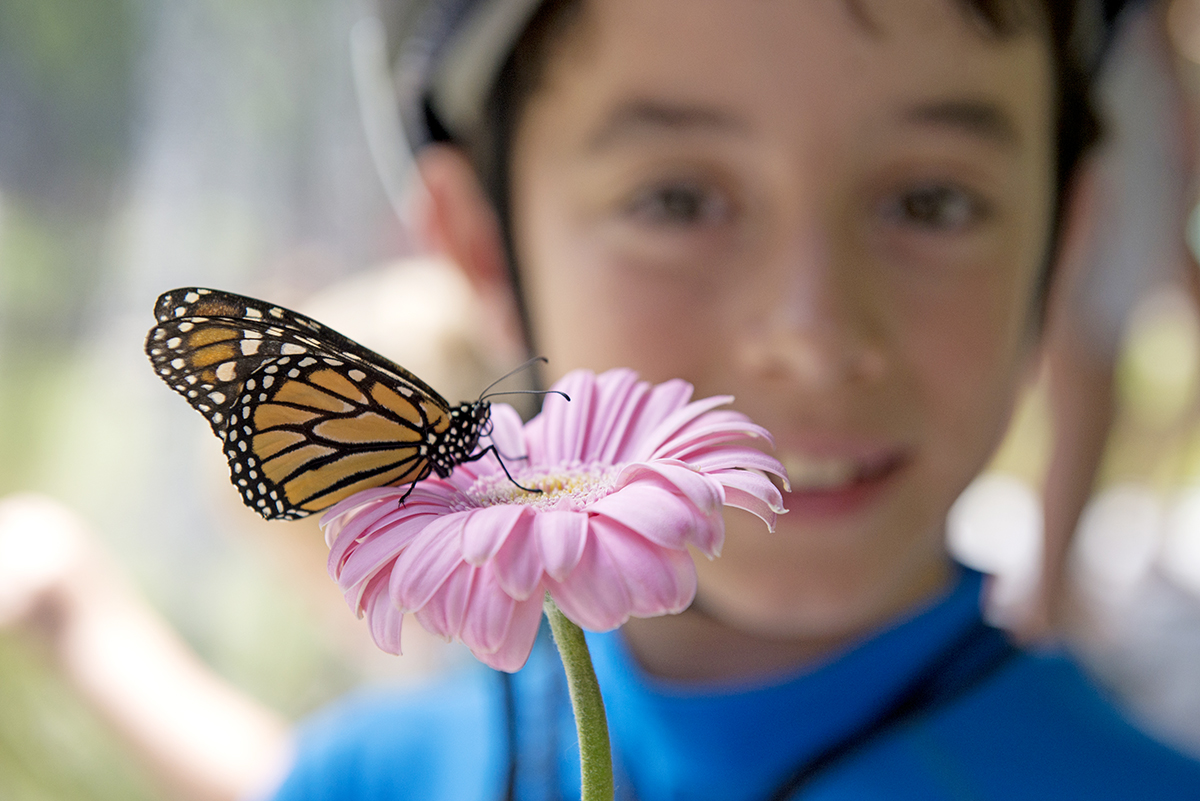 Paul Ritacco, 9, holds a monarch butterfly on a flower during the "Open Wide" program in Lincoln Park on July 8, 2016. The program demonstrated each step of a butterfly's life cycle and allowed people to feed the monarch butterflies. The event was sponsored by Lynda Acker and her husband Jeff in honor of their daughters Caroline and Christina. SARAH HOLM/DAILY FILE PHOTO

For Adam Gollwitzer, teaching students about science for 12 years helped him realize that young people often crave to work on something real.

“They want to feel like they’re contributing something to the world,” said Gollwitzer, a secondary science educator at Chautauqua Lake Central School. “Not so much for a grade, but in a way that impacts society around them.”

Gollwitzer and a team of his students will present their latest contribution — research they compiled on monarch butterflies — at Bird, Tree & Garden Club’s first Monarch Moment of the season, titled “Monarch Populations Beyond Eastern North America,” at 12:15 p.m. Monday in Smith Wilkes Hall.

As part of the aptly titled class that Gollwitzer helped design, “Metamorphosis,” local high school students researched and formed a presentation on monarch butterflies that live outside North America.

The course highlighted various changes within scientific research: climate, technology and attitudes, for example. But in the end, the students chose a specific topic to research.

“All I did was kind of guide them along,” Gollwitzer said. “In this case, the declining monarch population is a current unsolved problem that could use all the attention it could get.”

Monarch butterflies primarily live in North America, migrating between Mexico, where they live in the winter, and parts of the U.S. and Canada, according to Monarch Watch, a nonprofit program based at the University of Kansas.

“They kind of retool here, and then they fly all the way back to Mexico,” Gollwitzer said.

A complete migration involves multiple generations of butterflies. The monarchs reproduce and die off several times throughout their journey, yet instinctively know to return to their winter homes in Mexico, according to Monarch Watch.

“Monarchs really act as bellwethers to habitat destruction and environmental damage,” said Lynda Acker, monarch initiative chairman for BTG. “They’re very sensitive and have a complex life cycle. There are many points along the way where things can go wrong.”

The class’s research comes at a time when the monarch population is declining in North America. The number of monarchs has decreased by more than 80 percent since the mid-1990s, according to a February report by the Center for Biological Diversity.

In addition, the recent counts of monarchs confirmed that the butterfly’s population fell by nearly one-third between the 2016 and 2017 winter seasons. The insect’s main threats include severe weather, pesticides, disease and climate change, according to the center.

Rather than just researching population decline, though, the students expanded their focus to see what other monarch populations are doing throughout the world, Gollwitzer said.

Their presentation for BTG Monday will center on the varying characteristics, migration patterns and population numbers of butterflies outside of North America.

“They worked in teams, scoured the internet, made some phone calls to experts, read some articles from peer-reviewed journals on the topic,” he said.

Moving forward, Gollwitzer hopes the school and Chautauqua Institution can continue to support each other and share resources for learning.

“For some of the students, this may be their first time on the grounds, and we want them to see what’s here,” he said. “I think they should know what’s here.”

Acker said she appreciates the collaboration.

“I think it’s fantastic that they researched this and they put together their talk, but also they’re local,” she said. “There’s just not enough cross-talk between the Institution and the region.”

The monarchs that do live on this continent, though, have particular relevance to the region surrounding Chautauqua. The butterfly’s “super generation,” which makes the full flight back to Mexico, is hatched in Chautauqua County and nearby counties in the summer, Gollwitzer said.

In recent years, Acker and BTG have worked to make Chautauqua a more hospitable place for the visiting butterflies. Such work involves encouraging residents to certify their gardens as monarch “waystations,” or places safe for the butterflies to lay their eggs on milkweed plants.

“What we want to do is pepper the Institution with these certified monarch waystations, and our eventual hope is that eventually Chautauqua could be the first certified town,” Acker said.

For residents interested in making their gardens more monarch-friendly, milkweed plants and others will be on sale at the Native Plant Sale from 11:30 a.m. to 7:30 p.m. Monday at the Smith Wilkes back patio.

The monarchs have already arrived at the Chautauqua area ahead of schedule, Gollwitzer said, about three to four weeks early. In the past month, 17 people have reported monarch sightings in the state to Journey North, an educational site that tracks animal migrations.

“There tends to be this fluctuation every year,” he said. “Sometimes they show up with broken wings because there was a weird storm over winter. This week, they’re running early and we’re not exactly sure why.”