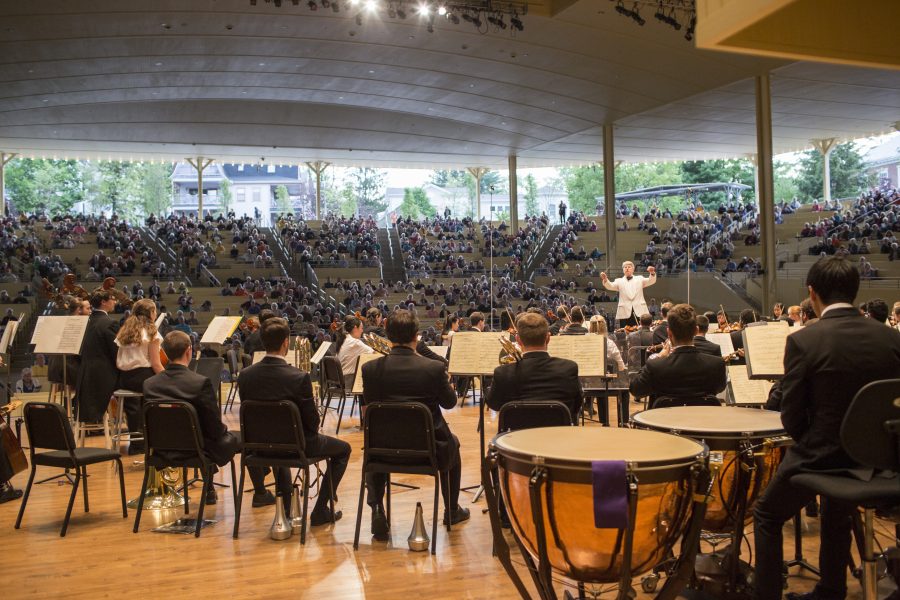 The Musical School Festival Orchestra performs the piece Fountains of Rome under the baton of Timothy Muffitt in the Amp on Monday, July 10, 2017. CAM BUKER/STAFF PHOTOGRAPHER

After spending three years in the audience, Vincent Ip is ready to take to the Amphitheater stage.

The 2016 Sigma Alpha Iota Competition winner for piano will perform Sergei Prokofiev’s Piano Concerto No. 3 with the Music School Festival Orchestra at 8:15 p.m. Monday in the Amphitheater.

“I’m excited to be performing with the MSFO,” Ip said. “I’ve heard them for three years, and they sound absolutely amazing. It is an honor to be able to perform with them.”

Timothy Muffitt, MSFO music director, said Prokofiev’s Concerto No. 3 is a wonderful piece for an orchestra, and said he’s looking forward to the “great collaboration” with Ip.

“ ‘La Mer’ is about the sea and the betrayal of the atmosphere,” Tong said. “The Sibelius is not about the sea per se, but it’s more about nature and the vastness of the landscape.”

Muffitt said that since Debussy’s style is unique, it presents a different set of challenges for the orchestra.

Those challenges, Muffitt said, require a different set of solutions and “the end result is glorious music beyond words.”

Alex Ott, a violinist in the MSFO, said that the orchestra has been playing together for a few weeks and have “meshed as a group.” Now, she said, the group can delve into the “delicate nuances” of the Debussy and Sibelius.

“It’s a lot of impressionist music, so there’s a lot of different colors we can explore,” Ott said. “It’s an epic orchestral poem. It should be a colorful, exciting concert.”

The three pieces in Monday’s concert will fill the Amphitheater with energy. Ip, who previously played Prokofiev’s Concerto No. 3 with a smaller orchestra in New York City, said he particularly enjoys the third movement in the piece because of its intensity.

“It’s bombastic and exhilarating for the audience and for the performer, as well,” Ip said. “I hope to portray this character and to fill the Amphitheater with high energy and great music.”

Since leaving the Institution, Ip has not only refined his piano skills, he’s also exercised another talent — figure skating.

As a member of “Holiday On Ice,” a figure skating show that toured throughout Europe, Ip was able to combine his two interests.

During the tour, he performed a number where he and a partner acted out a comic piano lesson. Ip said he played a frustrated piano teacher who would jump off the platform the piano was on and begin a skating solo filled with jumps and spins.

After his skating solo, Ip said he returned to the piano and played live music while another pair skated.

“Being able to do both on the show was something I’ve alway wanted to do,” Ip said. “I combined both of my professions, (and) both of my passions. It was quite amazing for me.”

Although figure skating and piano are both performing arts, Ip said they require different types of focus. Piano, he said, requires more mental attention as opposed to the physical energy needed for skating. Ip said that growing up, his schedule was dedicated to his training. He would wake up and go to the skating rink, and then come home to practice piano and do homework.

“It was quite strenuous, but I’m glad I did both because I still don’t think I could live without piano playing and figure skating,” Ip said.

Performing in “Holiday On Ice” fulfilled what Ip said he had been looking for by combining his two interests. In the future, Ip said, his dream is to produce his own show that features different talents and acts.

Maybe, he said, even an orchestra.

Children invited to practice skills by reading to a therapy dog