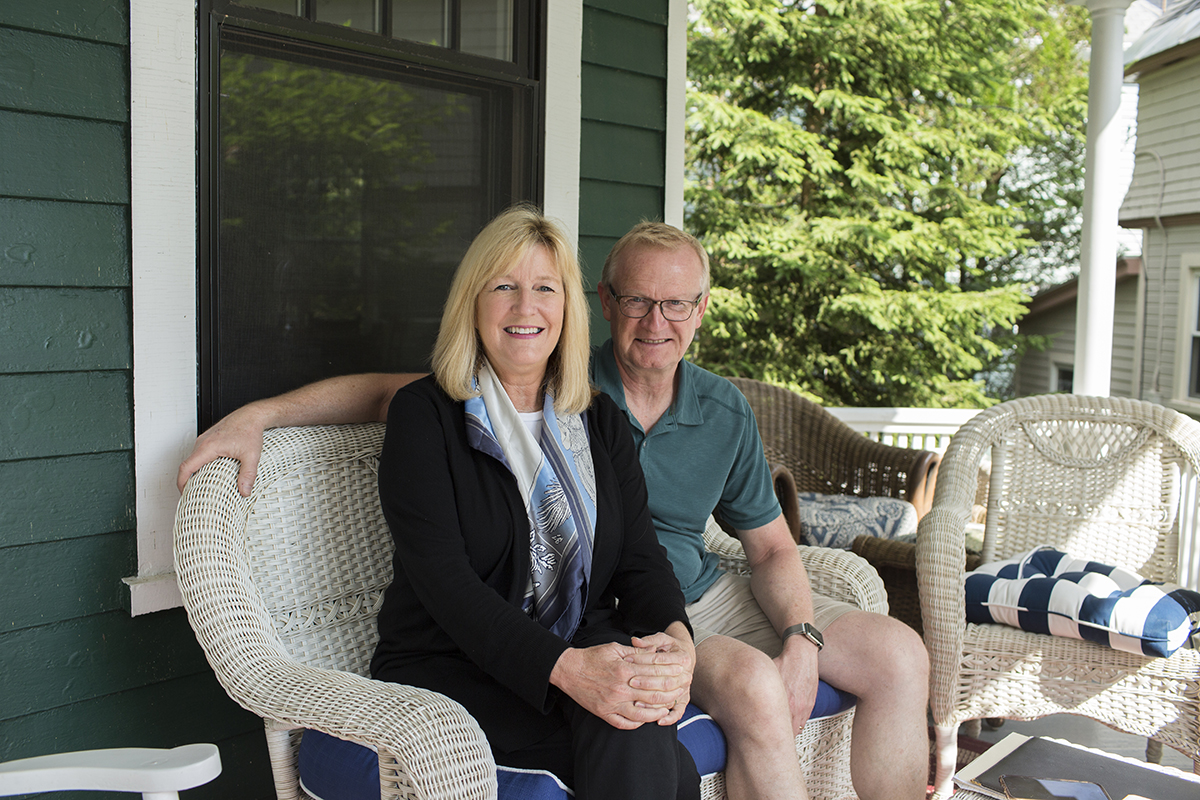 Nancy and Rob Kyler pose for a portrait on the porch of their home on Thursday, July 6, 2017. Nancy is a newly elected member of the board of trustees. CAM BUKER/STAFF PHOTOGRAPHER

One of the newest members of the Chautauqua Institution Board of Trustees is a native daughter. Nancy Kyler spent much of her youth in Bemus Point, just across the lake, and she hung out in Chautauqua with friends who worked and lived on the grounds during the summers. When she introduced her husband, Rob, to the Institution, he was immediately smitten, and they have been regulars on the grounds ever since. Their kids return regularly to the Institution.

While Rob has introduced more sophisticated health care to their home area in Virginia’s Shenandoah Valley, Nancy has built a career that has led her from raising money to build free clinics to the presidency of the American Medical Association Foundation. We spoke while enjoying a spectacular lake view from the curve of their porch just off North Lake Drive.

Nancy, you were growing up in Bemus Point, looking over at the Institution. How did you and your friends feel about Chautauqua?

Nancy: That’s an interesting question. My father worked for the Carborundum Company, a manufacturer of coated abrasives for industrial use. The company was based in Niagara Falls, but we could live anywhere in the area and chose Bemus Point. We moved to Bemus when I was 8 years old and our family moved to Atlanta when I was 18. Bemus Point, or Chautauqua Lake, has always felt like home to me. One of my earliest memories of here is about my friend Debbie Marks. Her father, Dick Marks, was the business manager for the Boys’ and Girls’ Club, I think. Debbie would have birthday parties on the grounds, and we would come over for an afternoon or an evening.

I have to tell you, growing up on Chautauqua Lake, we all thought we had the best childhood. We were on the lake every day in the summer. It was idyllic.

I remember having so much fun just running all around the grounds. I didn’t have much of a sense of Chautauqua Institution at first. In my teenage years, friends began to come over here and work at Chautauqua. We just thought the kids at Chautauqua had such an incredible life. We couldn’t believe how lucky they were to actually live on the grounds and to take part in Boys’ and Girls’ Club.

Dick Marks was an algebra teacher at Maple Grove High School in Bemus Point, and Winnie Lewellen, the long-time hostess at (then) Wensley Guest House, was a Latin and English teacher at the school, where I went to high school. She was also an adviser to the students. She always encouraged us to come over and stop by and see her at Wensley in the summer. Some of my friends got jobs as housemaids at Wensley, and in 1977 I got the chance to meet Margaret Mead there.

I remember coming to Sunday services in the Amphitheater and attending some concerts. Roberta Flack stands out. Even after our family moved to Atlanta, I came back for a week or two in the summer. This place was always my spiritual home.

People who grew up nearby seem to remember more than a whiff of inaccessibility around the Institution.

Nancy: I am still very aware of that and sensitive to it. It is similar to the situation you see with colleges in smaller towns. Sometimes there are tensions between college students and people who live in the town who may not share the same opportunities.

I remember when our kids started getting restless in Club, at age 15, 16, 17, and grumbled some; I started taking them to St. Susan’s soup kitchen in Jamestown once a week. We volunteered there and started to call ourselves the Chautauqua Corps. I think it gave them a sense of what they had here on the grounds. I’d love to see kids today from Club get involved in similar ways.

I’m so pleased to see the outreach from the Institution to the local community now, with the Battle of the Books and the other innovative initiatives, really engaging with the community. It’s nice to see President (Michael E.) Hill and some of his senior staff putting an emphasis on this engagement.

Rob, could you talk about your background and your career?

Rob: I’m a radiation oncologist. I’ve been practicing in southwest Virginia for the last 28 years. Nancy and I met while I was doing my residency in the D.C. area. She was working there and I was rotating through. The next summer, we came together to her high school reunion at Maple Grove High School in Bemus Point. That was my introduction to Chautauqua. We stayed with friends, over by Miller Park.

After we got married, we started coming to Chautauqua for some time every year. We rented for a few years, then bought a place on Haven Avenue that we had for many years until we bought our current house.

Do you maintain a hospital practice or a private practice, or both?

Rob: It’s a bit of both, a hybrid. My specialty is hospital-based, and I now have two partners and we practice out of two community hospital centers, about 30 miles apart. I was the first board-certified radiation oncologist in our area, and it was a great opportunity for me. My local community hospital was in the process of building a cancer center when I was finishing my residency. They were looking for a radiation oncologist to help launch the center. It was a bit audacious to jump in and start this pretty much by myself, but it has worked out well. About 15 years ago, we expanded to the second hospital and now operate in both Harrisonburg and Staunton, where we live.

Nancy: Our area is a nice mix of rural but with a lot of retirees moving in from the Washington, D.C., area.

Rob: A lot of my patients are federal retirees who find the area much less expensive than D.C. and an easier-going way of life.

Do you remember your first impressions of Chautauqua when you and Nancy came up to her high school reunion?

Rob: I do. I remember waking up — I think the Sunday of that weekend. We got up here late Friday night, and Saturday was crazy. But Sunday morning was 60 degrees and just beautiful, the way Chautauqua can be in the morning. There was a coolness in the air, and I felt the charm of the bell tower. We took a stroll around the grounds before heading over to Bemus to meet some of Nancy’s friends. It felt like we were in a little oasis on this lake. Pretty remote, but unlike any other place I had visited. It stoked a curiosity in me for sure.

Nancy, let’s talk about your career.

Nancy: I like to think that my career has been about leadership and helping others. I have always felt drawn to leadership positions, and even at Maple Grove I was class president twice. I felt a real calling to governance. It just seemed to be the best way to accomplish good things.

When we left the D.C. area and moved to Harrisonburg, we had our kids and I worked in a variety of roles. I got involved in medical malpractice defense, working as a consultant for law firms representing physicians in the hospitals. After we moved to Staunton, I was asked to work on a very famous local case involving the switching of two infant babies at the University of Virginia hospital in Charlottesville. I worked on that case for 2½ years.

I also was involved in the start of the first free clinic in Harrisonburg. This was an introduction for me to development work and as an active participant in larger medical issues. I got involved in the Medical Society of Virginia Alliance. The Alliance was basically an organization of doctors’ spouses, and I saw this initially as a way to help the free clinic. My work with the Alliance led to an offer to serve on the board of the Medical Society of Virginia. I served on a number of other local and regional boards.

Over time, the AMA Foundation heard of my work and I was invited to join that board. I was sometimes the only nonphysician to serve on some of the board’s committees. I do think I have gained a good understanding of the role of a board in working with an organization or administration.

What does the AMA Foundation do?

Nancy: We give out grants for establishment of free clinics in underserved areas. We support medical student scholarships. We have special programs for minority students and scholars. We are funded through the AMA, and some of the pharmaceutical companies contribute, especially in support of the free clinics. One of my priorities as president has been to spread the word more widely about what the foundation does.

You have been involved in fundraising for the Institution for many years.

Nancy: Yes, I have been a team leader for the Chautauqua Fund for over 15 years. In 2004, Marsha and Jack Connolly asked me to take the position as the first chair of the NOW Generation group. I held that position for three or four years. That was before the prominence of social media, so we definitely had our work cut out for us.

As time passed and I got more involved in Chautauqua, I did aspire to a board of trustees appointment. It seemed like a chance to make a real contribution to a place we both love.

What are your committee assignments?

Nancy: I’m on the Personnel Committee, which I love. As the AMA Foundation president, I work closely with our executive director on contract issues and other sensitive matters. I’m on the Program Policy Committee also. Programming is a big part of the Institution’s public face, and it’s exciting to be involved with it. We have the chance to attend some Asset Policy Committee meetings to get a better, wider understanding of the relationship between the financial sustainability of the Institution and its multifaceted program activities. 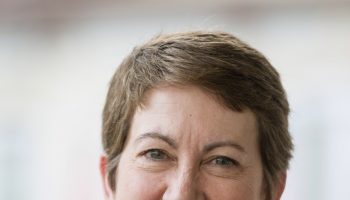 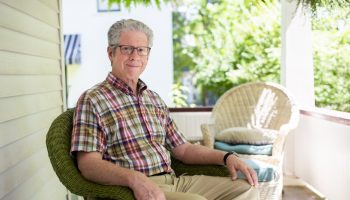