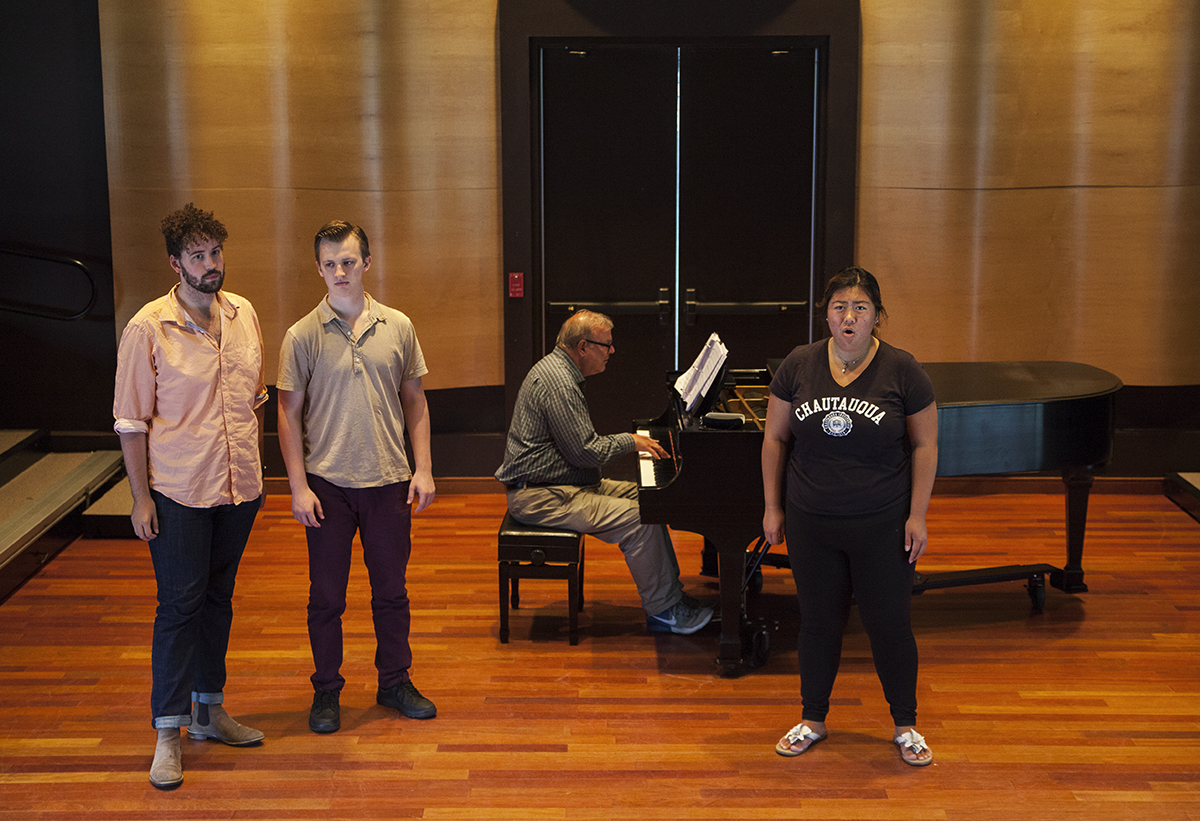 When most people read Langston Hughes and John Steinbeck, they see poems and novels.

“Words inspire me,” Gordon said. “I was fascinated by the way words were set to music and the way composers make theater out of words.”

Gordon will join Donald St. Pierre, head vocal coach, and 12 voice students in a recital at 7:30 p.m. Wednesday in McKnight Hall. The program is filled with “great words,” he said, as every song is either a poem Gordon has set to music, lyrics he’s written or texts of operas.

Growing up in Oceanside, Long Island, Gordon would spend his weekends at the New York Public Library for the Performing Arts, taking out every opera written in the 20th century. He’s used his musically “encyclopedic mind” to put his own spin on his work.

“You’re always trying to tell your own story,” Gordon said. “You either pick stories to work on or you make sure the stories that are given to you are going to tap something inside of you. Unless an idea has a certain amount of heat for you, it’s not going to come out right.”

One piece in Wednesday’s recital, “The Zephyr/One Star,” comes from Gordon’s opera The Grapes of Wrath, based on the John Steinbeck novel, which was recently in production at the Opera Theatre of Saint Louis. Although the opera premiered 10 years ago and the novel was published in 1939, Gordon said the topic of “loss, and hope and a corrupt government” is relevant for audiences today.

While Gordon is passionate about The Grapes of Wrath and its current success onstage, he doesn’t play favorites among his work.

He said picking a favorite piece is like asking a mother to name her favorite child: “It just doesn’t happen that way.”

Gordon said he’s always careful in putting together a program for Chautauqua that will be both fun and challenging for the young singers. Other pieces by Gordon that will be performed Wednesday come from My Life With Albertine, 27 and Morning Star. Gordon is excited to see how the young vocalists bring his work to life in Wednesday’s recital. He said he’s inspired by their enthusiasm about performing.

“You can ask a lot of them and they’re fantastic about giving it to you,” Gordon said. “They’re somewhat undamaged by the world … that’s what I’m excited about mining at Chautauqua, that sort of unbridled, very open-hearted work that new young artists have and do.”

When writing his music, Gordon keeps vocalists in mind. He strives to create work that “takes them all the way,” challenging them in singing and acting.

“I want to create a body of work for singers that make them feel like rich artists,” Gordon said. “I ask a lot of them and I’m excited when they get it.”

Morning Worship: Stop and savor what God has done for you