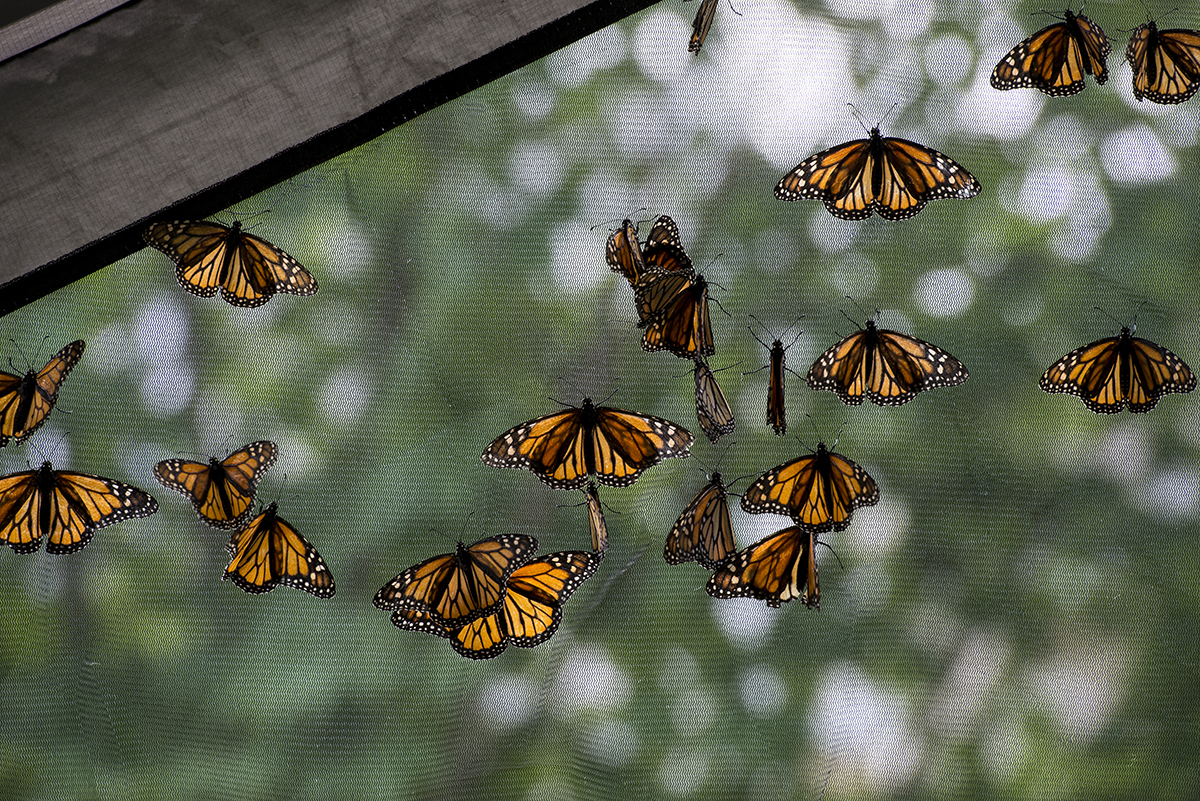 Monarch butterflies cling to a tent during the "Open Wide" program in Lincoln Park on July 8, 2016. The program demonstrated each step of a butterfly's life cycle and allowed people to feed the monarch butterflies. The event was sponsored by Lynda Acker and her husband Jeff in honor of their daughters Caroline and Christina. SARAH HOLM/DAILY FILE PHOTO

When someone thinks of a butterfly, they’re probably picturing a monarch. The recognizable orange and black butterflies migrate more than 2,000 miles between Mexico and Canada each year, and some briefly reside in the area around Chautauqua Institution every summer.

But the bugs are on the decline: Over the past 20 years, their North American population has decreased by 80 percent on average, according to the Center for Biological Diversity.

Lynda Acker wagers more people will care about saving the species, though, if they interact with the butterflies in real life.

From noon to 3:30 p.m. Thursday in Lincoln Park, Chautauquans will be able to do just that at Monarchpalooza, an experiential learning event where attendees can observe and handle monarch butterflies at various stages of their life cycle.

“It gets to the heart of the people who experience them,” said Acker, chair of the Bird, Tree & Garden Club’s monarch butterfly initiative. “That’s what we need to do in order to save the species. We need them to love this animal.”

The event, open to all ages, will feature various tents where people can observe caterpillars, chrysalises and fully formed butterflies. Docents from around the region will be on hand to teach attendees about the monarchs, BTG President Angela James said.

“Essentially, people will walk through every stage of the monarch life cycle,” James said.

The event, now in its second year, was initially conceived last summer by Lori Stralow Harris, a BTG guest lecturer who operates a butterfly farm in Illinois. This year, Harris arranged the shipment of butterflies from farms in New York to the grounds for the event.

“The value of having such a personal relationship and falling in love with a monarch is completely worth it,” Harris said.

Monarchpalooza’s finale of sorts is a 20-by-10-foot tent filled with flying monarch butterflies. There, attendees can enter with a nectar source and feed the insects.

Milkweed plants will be available for purchase at the event as well. The flowering plants are crucial to the butterflies’ survival: monarch caterpillars exclusively eat and live on milkweed.

“People can purchase it and pop it right in their garden at home,” Acker said.

Monarchpalooza complements BTG’s Butterflies and Blooms initiative, launched last summer, which encourages Chautauquans to certify their gardens as monarch waystations, Acker said. Residents that meet certain requirements, such as having enough milkweed, nectar sources and native plants, can register their gardens with the organization Monarch Watch.

The area around Chautauqua is especially important to the monarch’s survival, Acker said.

“The monarchs that hatch here in the late summer are the ones that don’t reproduce until spring when they return to Mexico,” Acker said.

While most monarch butterflies don’t live beyond five weeks, the “overwintering” generation can live up to eight months, according to the National Wildlife Federation. That last generation hatches at the end of summer, returns to Mexico and remains there until the next spring.

The event will also include activities for kids, a Q-and-A table with experts, a lemonade stand and copies of a children’s book that Harris recently authored, titled Butterfly Birthday.

Above all, though, BTG aims to use the event to foster connections between Chautauquans and butterflies.

“They’re gonna fall in love with monarchs and learn things that they had no idea about,” Harris said. “It’s just a lot of fun.”