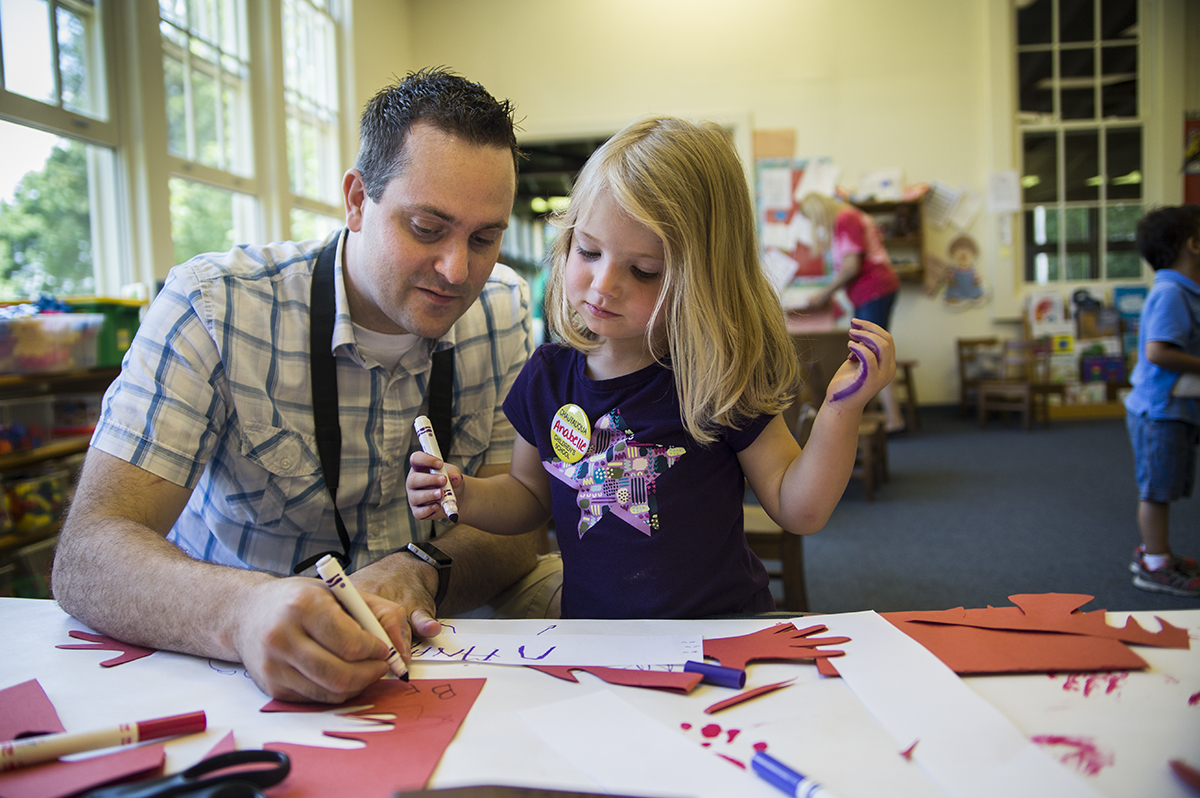 They’re going to do it all.

But first, they want to show off everything they’ve done so far.

The doors of Children’s School were thrown open on Friday as kids and teachers welcomed in parents and family members for the annual Open House event.

From the steps at the front of the school, they welcomed their loved ones in typical Children’s School fashion: with song.

To make their point crystal clear, the first number they sang let everyone listening know that when they grow up, they’re going to be whatever it is they dream of being, from animal doctors to professional basketball stars.

They followed that with a rousing rendition of “The Children’s School Song,” declaring for all to hear that they would most certainly be “coming back next year, you bet!”

Once the applause died down, each group returned to their respective rooms, keeping family members on pins and needles for just a few more moments, anxious to see what their sons and daughters had been working on all week.

Family members weren’t the only ones who were excited.

Not just to see their parents, but also to show off everything they had been working on all week, said Blue Room teacher Suzanne Piper.

A handful of Yellow Room kids were pumped to show off ooblick (think Silly Putty, only pink and more gooey). The ooblick was described by a few as “pink and icky water,” but 5-year-old Graham Shank got even more specific.

“It’s supposed to be all sticky,” he said, “but you can stretch it.”

Eleanor Clark had a surprise in store for her mother.

As parents dispersed throughout the school building, they found activities galore in which to engage with their kids.

Group 1 (6- and 7-year-olds who transition to Boys’ and Girls’ Club in the afternoon) set up on the driveway in front of their building. Sounds of plungers echoed off the walls as the kids used them, along with sponges and plain old brushes, as well as different color paints, to decorate a long sheet of white paper stretched out on the blacktop.

Kids, donned in oversized white T-shirts, laughed as they squirted and decorated one another with colored water from spray bottles.

Inside the school building, in the Yellow Room, attention was focused on the “believe board.”

“I can’t wait to show them the black paper with all the mythical monsters we wrote down,” said 5-year-old Oliver Zachry.

Those mythical monsters were joined by King Kong, mermaids and rainbows as Yellow Room kids yelled out all the different things they believe in.

In the Blue Room, kids and their parents learned about mixing colors as they painted designs on construction paper.

The Orange Room gave kids and family members the chance to work with water colors, while the Purple Room produced magic clear slime — a combination of clear glue, water and glitter.

In the Green Room, the 3-year-olds had Silly Willy story time and made sure Willy (a jolly, two-dimensional bear affixed to a bulletin board) was dressed appropriately for various parts of his day by pinning different outfits on him as the story moved along.

The Red Room gave 3-year-olds the chance to practice the days of the week, singing each of the names of the seven days in turn.

The Open House concluded with a production of The Three Little Pigs. Staged on the school’s back lawn, the show took place right next to the playground and sand box.

In full view of a tub of ooblick.