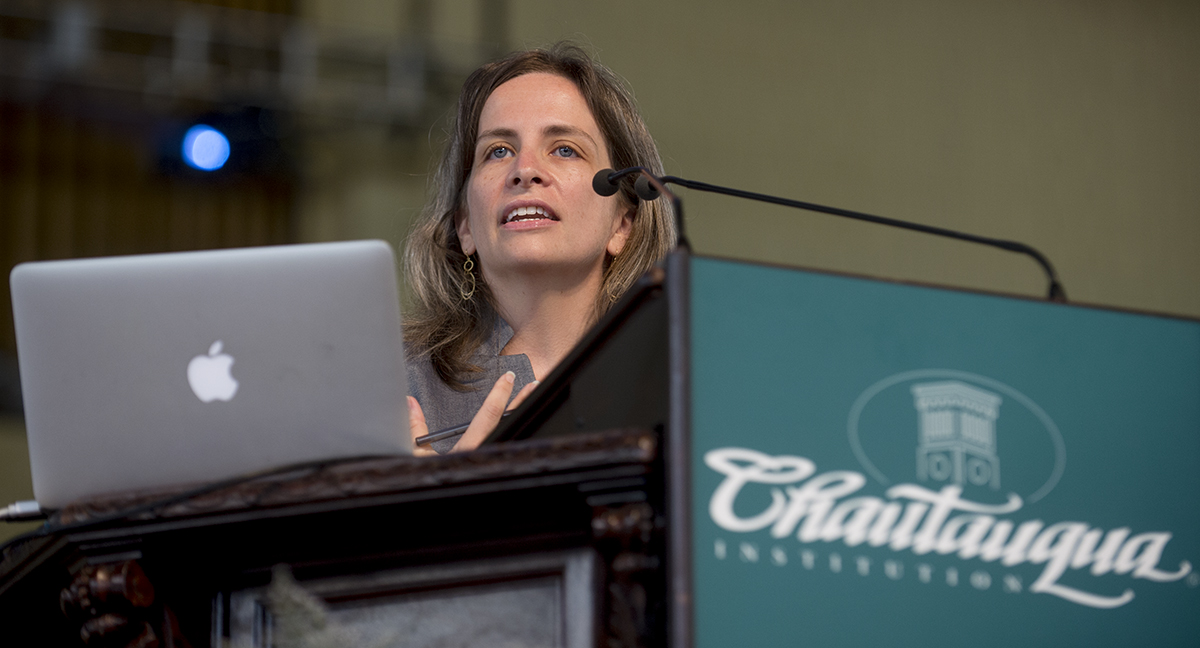 Sara Ladislaw, senior fellow and director of the Energy and National Security Program at the Center for Strategy and International Studies, delivers a lecture on the changing global energy landscape Thursday, July 20, 2017 on the Amphitheater Stage. DAVE MUNCH/PHOTO EDITOR

For Sarah Ladislaw, it’s all about power.

But as the director and senior fellow of the Energy and National Security Program at the Center for Strategic and International Studies and, as per her bio, an “expert in U.S. energy policy,” she knows that’s true in more than just one sense.

“My hope is … ultimately, to leave you feeling empowered. … I think (that) one of the most important parts of the energy landscape today is that you, as a consumer of energy, as an interested stakeholder in the energy world, can actually effect more change today than ever before,” Ladislaw said.

Speaking Thursday morning in the Amphitheater as part of Week Four, “Geopolitics Today: A Partnership with CSIS,” Ladislaw went on to lay out the complex global ecosystem whereby economics, policy, technology and science all converge under the banner of energy.

Yet even someone engaged in such an expansive field of study had to start somewhere.

“I’m really just a small-town girl from New Hampshire who liked to sit on a lake and think about really important global issues,” Ladislaw said.

The similarity to Chautauqua Institution did not go unmentioned.

Even now, as a part of CSIS, she noted that she has a different background than many of the engineers and scientists she works with. She was a Japanese language major in college who then went to school for international security but “didn’t really have an affinity for the guns, bombs, ships, germs” that the field dealt in; she enjoyed the global aspect, but needed a different lens through which to look at it.

“What I did was I chose a lens — energy — that allowed me to travel the world in a way that I find deeply gratifying and always interesting,” Ladislaw said.

With the global energy sector’s fingers in so many different pots (health, policy, tech, security, business, infrastructure, ecology, human rights and beyond), she has found it a great way to “satisfy huge amounts of curiosity across a wide range of issues and to affect things that are deeply strategically important.”

The last couple decades of energy politics were defined by scarcity, with particularly enormous Chinese consumption prompting fears about whether resources could meet demand. This period of “peak oil” forced the United States to consider not only how fuel was running out, but also how that scarcity might incite international conflicts.

“We still tend to think about China and energy consumption and the global energy patterns as being on that insatiable path … when in fact the market has changed,” Ladislaw said. “We find more and more places, the U.S. quite fundamentally being one of them, where we actually have an abundance of resources.”

Thanks to the discovery of “unconventional oil and gas resources,” America experienced the “largest surge of oil and gas production in the (sector’s) history” over the last decade. Increasingly cheap renewable energy has further created a sense of plenty.

Other factors have changed, too; energy companies increasingly favor smaller, nimbler business models, and global environmental policy has switched from a top-down to a bottom-up ethos.

Against the backdrop of geopolitics at large, the state of modern energy gets further complicated.

“Energy,” Ladislaw said, “is power. Energy is power at a local level, energy can be power at a global level. And when power dynamics within a country and in between countries are changing, energy can play a role.”

What’s more, energy policy is also informed by “transnational trends” like those toward radicalization, isolationism, populism and backlash to globalization or capitalism.

Thus, seated at the intersection of economics, environmentalism and security, policymakers must strike a balance between all the converging opportunities and crises the energy sector presents.

We still tend to think about China and energy consumption and the global energy patterns as being on that insatiable path … when in fact the market has changed. We find more and more places, the U.S. quite fundamentally being one of them, where we actually have an abundance of resources.”

From the large scale politics of energy, Ladislaw then transitioned to the specifics of one particular aspect of the politics: namely, the dynamics of the oil market.

“In 2014, when oil prices went from well over $100 (per barrel) down to under $30 in a very short period of time, folks were singularly focused on how long oil prices would remain low,” Ladislaw said.

And as U.S. hydraulic fracturing (fracking) contributes “more and more oil to the global energy supply,” fueling “sheikhs versus shales” competition between overseas and domestic oil producers, the answer to that question will have a big impact on Americans.

“As the chief economist from BP, the oil and gas company, recently said in their oil Outlook, ‘U.S. tight (or shale) oil is sort of like a Weeble.’ You guys know what a Weeble is?” Ladislaw asked.

Before anyone could answer, the fire alarm went off.

The audience murmured and laughed for a moment before a voice over the PA system urged them to “proceed calmly to the nearest exit and leave the building immediately.” The assembled Chautauquans erupted in premature applause for Ladislaw before beginning to file out of the Amphitheater en masse.

Gathered around the perimeter of the facility, people discussed what to do next; some left, even going so far as to declare Chautauqua Lake the safest place to head, but many stayed put. It was only a moment before the yellow-shirted Amphitheater staff explained that it had been a false alarm and everyone could return.

As attendees began retaking their seats, played back in by the distant blare of a fire siren, Matt Ewalt — Chautauqua’s associate director of education and youth services — took to the stage.

“It was a false alarm that was triggered by a crew that was on-site … and we will continue,” Ewalt said. “And of course, as I was telling Sarah, everyone will remember this lecture; not just for her content, but for the adventure halfway through.”

“For the first year or so of this oil price downturn, OPEC (the Organization of the Petroleum Exporting Countries) decided to sit back. … (But then) not only OPEC, but also countries like Russia and several other countries (looked) to (cut oil) supplies in order to bolster prices,” Ladislaw said. “We’re still in the middle of that experiment. They cut for a six-month period of time … (which was) a really big boost to their economies. But over a period of time (prices) declined because in addition to those oil prices that increased … U.S. tight oil production increased. So that Weeble that I was talking about before I set off an alarm … (came) back really fast, really aggressively.”

The OPEC coalition had to extend their supply cuts and are now considering bringing in other, poorer oil-producing countries, too. But the tactic is taking its toll.

“How long can OPEC hold up these production cuts?” Ladislaw asked. “It hurts all of them.”

But while American fracking may present a short-term existential crisis to nations heavily reliant on petroleum profits, the spectre of climate change is a longer-term one.

“There is a fundamental question in there about whether … going forward, there’s not going to be as much demand for oil,” Ladislaw said. “Now I know that seems a little passé right now … (but) it is a really big deal when toward the end of the last administration … folks were saying, ‘Are we going to see an end to oil?’ ”

It is a question that every stakeholder, from countries to companies, is reckoning with.

Whether prices will rise or fall amid this “fundamental shift” remains to be seen. But it is a question that, as shale fracking becomes more and more lucrative for the United States, will itself become more and more significant.

“The more we produce, the more we become like producers,” Ladislaw said.

Oil isn’t the only energy field in a disruptive period right now; natural gas, once niche, has been found in such abundance in America that it may eventually be exported.

Though historically marriage-like in its need for long-term contracts and infrastructural development, the gas industry is starting to look more transactional, as with dating, Ladislaw remarked.

“You don’t have to have that long-term relationship, and these markets are becoming more liquid,” Ladislaw said.

With the United States now experiencing a “natural gas glut,” new opportunities for trade are opening up and new geopolitical paradigms are aligning. For instance, many have long viewed Russia as exploiting its gas sales to Europe for political leverage. A U.S. entrance into that market could “break that hold.”

Finally, Ladislaw touched on climate change and the role it plays in her field.

Though many people think of climate change as “doom and gloom,” Ladislaw said that it also presents opportunities, which people “don’t (consider) enough.”

There are two things she identified that need to be done to deal with the crisis — “reduce emissions … and adapt to the changes that are actually going to take place” — as well as several additional factors that will make the fight easier to win, like cheaper solar panels and more investment in clean energy.

With energy industries from California to Saudi Arabia working to “unlock some of these markets” and meet emerging demand, the economics of the situation cannot be ignored, either.

“The politics of these issues hits very deep right at the local level, and we’re going to have to manage that,” Ladislaw said.