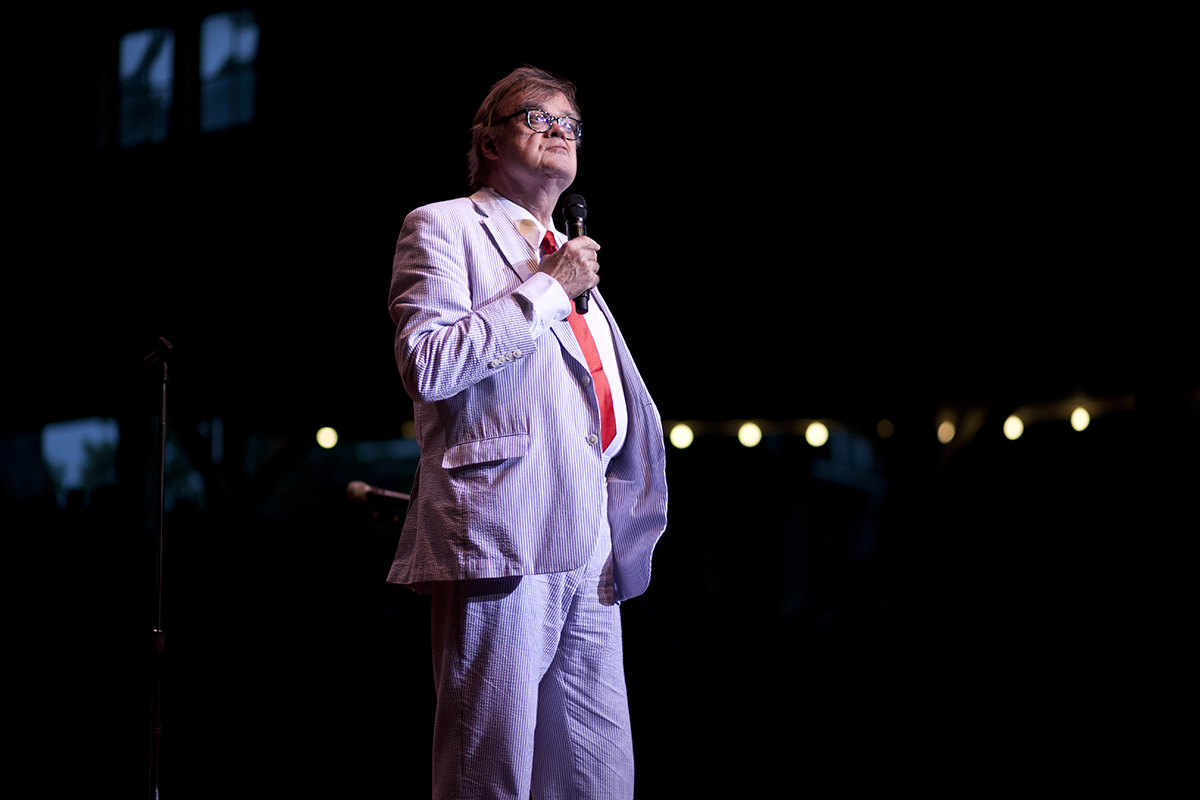 The iconic voice that more than 3 million Americans have tuned into for 42 years will fill the Amphitheater Friday.

Garrison Keillor, the former host of the public radio show “A Prairie Home Companion” will perform at 8:15 p.m. Friday in the Amphitheater. He will be joined by Richard Dworsky, a pianist and former music director for “Prairie Home,” and Heather Masse, a jazz singer who was a frequent guest on the radio show.

Keillor’s routine is based around stories from Lake Wobegon, a fictional Midwestern town “where the women are strong, all the men are good looking, and all the children are above average.” Though the setting is imagined, Keillor bases his material on his own life growing up in Anoka, Minnesota.

But Keillor said in a 2016 interview with CBS News that the culture Lake Wobegon represents is disappearing.

“The Midwest that I talk about is the Midwest of my childhood,” Keillor told CBS News. “And that is receding in the rearview mirror at high speed.”

As a “registered liberal who mostly toes the party line,” as Keillor described himself in a June 20 Washington Post column, he’s able to comment on a community he’s a member of with the aloof accuracy of an outsider. It’s a skill that dates back to his days growing up in Anoka.

When he was in high school, Keillor told CBS News, he wanted to play football. Due to a medical condition, he wasn’t allowed to — a setback that ultimately led him to discover his talent for storytelling.

“It takes you a long time to appreciate these strokes of astonishing good luck,” Keillor said on CBS News. “Instead of playing football, I wrote about football. There’s no better thing for a kid to write about than things that are actually happening before your eyes.”

While he’s known for his voice, Keillor is most comfortable speaking through pen and paper. He told CBS News he overcame his fear of speaking through a trick his speech teacher taught him: When he took his glasses off, people looked like “little flowers on a hillside.”

“When you learn that you don’t have to be afraid of people you can’t see, you take a step towards broadcasting,” Keillor told CBS News.

Even though he’s spent much of his life on air or on stage, performances like Friday’s are still out of Keillor’s comfort zone.

After one stage performance, Keillor told CNN in a 2016 interview, a woman told him she enjoyed the show but asked him why he stood with his back to the audience.

“Well, because I’m not a performer,” Keillor said. “It’s distracting to do a show. You get to thinking about what you’re going to say and you forget about them.”

Since retiring from his “42-year detour,” as he described “A Prairie Home Companion” to CBS News, Keillor has returned to his true love — writing.

Keillor described himself in a Nov. 9, 2016, Post column as a “liberal elitist” who used to “spend Sunday afternoons with a bunch of (Republicans), drinking Scotch and soda and trying to care about NFL football.”

While he’s skeptical of President Donald Trump, “the cruelest candidate since George Wallace,” Keillor has hope for the country.

In that same column, Keillor said he returned to his hometown and ran into a couple of his former teachers who lived through wars and are still optimistic.

“The past year of politics has taught us absolutely nothing,” Keillor wrote. “The future is scary. Let the uneducated have their day. I am now going to pay more attention to teachers.”

If nothing else, Keillor offers, Republicans can “deal with (Trump).”

Secretary General William Vendley urges audience to ‘work with the other’