Secretary General William Vendley urges audience to ‘work with the other’ 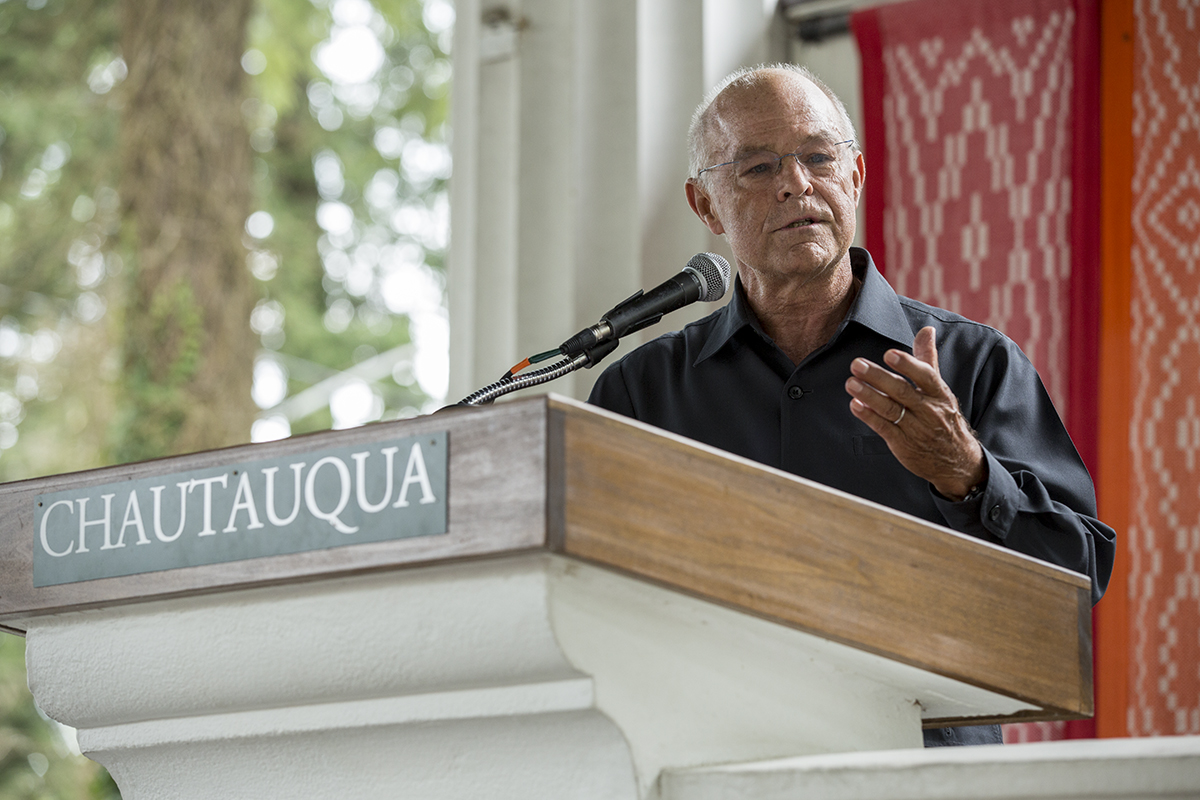 William F. Vendley, secretary general of Religions for Peace International, delivers his presentation at the Hall of Philosophy on Wednesday, July 19, 2017. Religions for Peace is the world's largest coalition among the religious communities to stop war, address poverty and protect the Earth. CAM BUKER/STAFF PHOTOGRAPHER

Twenty-five years ago, Bosnia-Herzegovina’s religious communities were experiencing “the fevers of ethnic nationalism.”

William Vendley, secretary general of Religions for Peace International, shared this history with the audience at his lecture “Shared Well-Being: An Emergent Multi-Religious View of Peace,” part of Week Four’s interfaith theme “Religion and Statecraft Today: The Soft Power of Global Peacemaking” Wednesday in the Hall of Philosophy.

He asked the audience members to imagine themselves as a religious leader who has a duty to protect and stand up for their recently savaged community. He painted the picture of this religious leader being the community’s “person,” breaking  news of tragedy as gently as possible.

The religious leaders of Bosnia-Herzegovina during the real “bleak, sullen” times 20 years ago did just that.

Interfaith people of influence traveled to various “sites of atrocity” after several tragedies, in an attempt to show victims they recognized their suffering.

Vendley told of a report on one of those trips by Mustafa Cerić, former Grand Mufti of Bosnia-Herzegovina, at a gathering in Washington, D.C.

“Standing before (then-U.N. ambassdor) Madeline Albright and ambassador Richard Holbrooke, the chief negotiator of the Dayton Accords,” Vendley said, “(Cerić) said simply, ‘I do not know where I personally, where my community or my country would be without the multireligious cooperation … without our having stood in solidarity across our … religious traditions.’ ”

Vendley said conflict in Sri Lanka’s large Buddhist population began in 1983, and beginning in 2006, the government launched major attacks against the Tamil stronghold in the north, where the population was somewhat “trapped between violent extremists of an insurgency and a government response.”

Just nine years before that, Vendley witnessed the Revolutionary United Front, a rebel army, initiate an 11-year war in Sierra Leone. Vendley called this landscape “like a school” for him as he was quickly educated on RUF’s initiatives — like recruiting children to be child soldiers.

“The violence was so grotesque that all informal channels had to be broken,” he said. “The government didn’t have the credibility to negotiate with these who had been so savaged of their population.”

But that’s where Religions for Peace came in.

Muslim and Christian women went together, “unarmed and alone,” into the bush to intervene for the children by talking to the rebels, securing the release of 50 captured children.

“Women used their power as women of faith,” he said. “They all happened to be mothers, as well. They used that ‘mother power in the bush’ to secure the captured children and to open, ultimately, a true channel for negotiation that resulted in a peace treaty.”

Vendley said the most intimate lesson he learned is “the odd strength that can come from faith.”

“(People of faith) are very open about it,” he said. “ ‘My faith is helping me when I have nothing.’ They confess that they have a hidden source of faith, spirituality, a living link with transcendent history that grounds their lives. Often it is kind of a dark night of affliction: gross injustices, withering losses that, like an X-ray, helps people of faith actually focus on how powerful their own faith really is for them.”

He said never to underestimate the “moral sensitivities” of a religious community, either. Their striving — to be a good person, to provide tools for a flourishing community — is unmatched.

This is the daily grind for religious communities, Vendley said. And if someone looks at the vastness of religious centers — temples, mosques, synagogues, churches — they will see the general consensus of a path to peace.

After the peace accord in Bosnia-Herzegovina, for example, 100 percent of mosques and churches became centers for advancing reconciliation and addressing issues such as gross violations of human rights.

“If you have at that table a Jewish person, a Christian, a Muslim, a Hindu, a Buddhist, a Sikh … among others, in the back of their mind, they actually have, from their own tradition, a heuristic, that means anticipatory … vision of peace,” he said. “ ‘Shalom’ is a short word. ‘Shallah’ is a short word. ‘Shanti’ is a short word. But it suggests that those traditions and their analogues to others, a comprehensive state of human and social flourishing if we were living into the completion of our religious visions of peace.”

Religious people, he said, should not just equip themselves as a task force against the threats to spiritual well-being. They should also construct a positive agenda, nurturing the “flourishing of human dignity … and the common good.”

“You don’t get healed just alone; you’re typically healed in relationship,” Vendley said. “If you’ve suffered previously, it’s incalculably helpful if those who have hurt you can help, in some sense, your healing process.”

In 2006, Religions for Peace’s theme was shared security, the idea that people are “no more secure than the least secure among us.” And in 2013, the coalition’s theme was shared well-being, signifying “two inseparable, linked, utterly reciprocal realities that have to always be held together”: human dignity and the common good.

Despite different theologies, religions began to “lay (their) foundation stones” toward building something that might signify “positive peace.”

“If they’re correct, if there is an ‘unbreakable reciprocity’ between your unfolding your human dignity and the building up of the common good, then we have a framework to assess the relative adequacy of our cultural, political, economic and social systems,” he said. “Do they undercut human dignity or do they erode the common good?”

But despite the differences in pace, when Religions for Peace did surveys with more than 90 interreligious councils, every single poll was conclusive. The organization asked men and women on these councils how they felt after participating in interfaith work.

People cited “profoundly improved images” of the others’ religions, a “strengthened desire to cooperate” with those of differing faiths and “falling more in love with their own religion,” Vendley said.

And finally, the coalition found that “heart speaks to heart.”

“One begins to see the other through the ever more radiant mercy known in one’s own tradition,” Vendley said.

In short, interfaith roots run deeper than most, even if the “throbbing news cycle” does not report on it.

“They are in the villages of our worlds today, as men and women of goodwill are standing together before very, very difficult problems,” he said, “most of all as religious people are seized by hope for a truly positive vision of peace, which they know their own faith calls them to.”