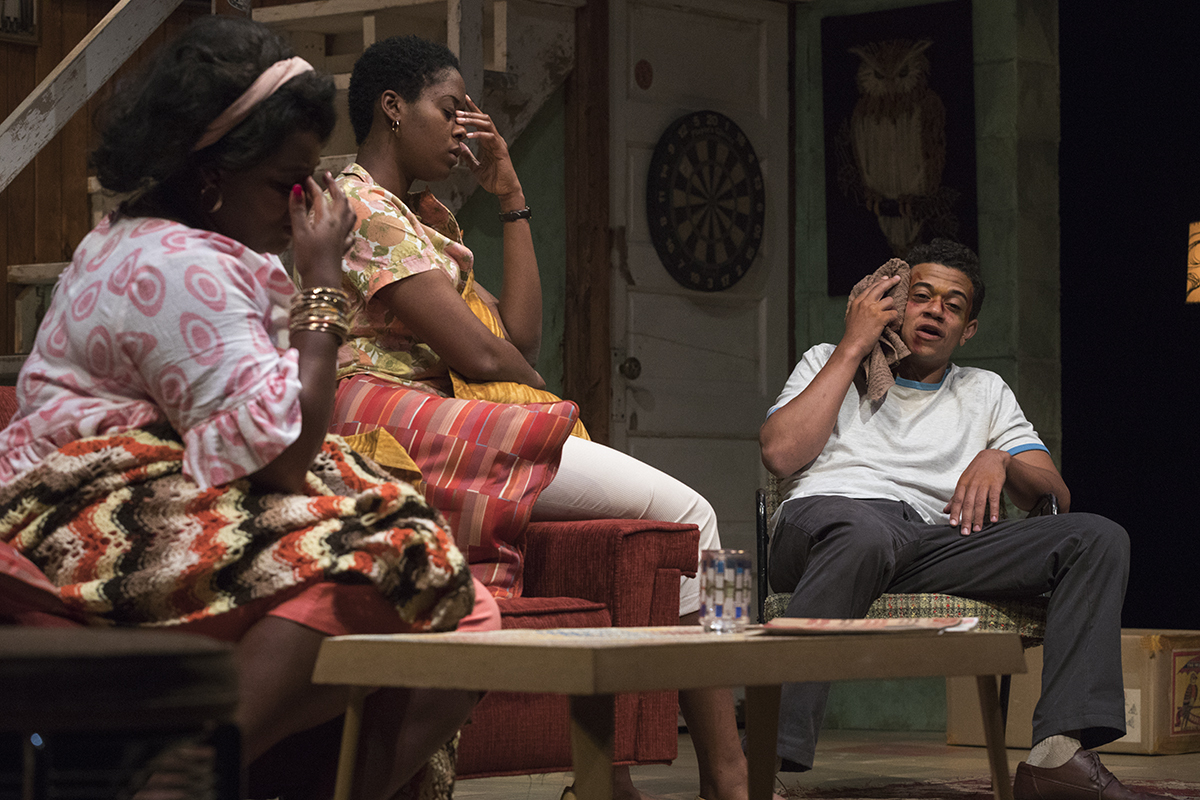 Stori Ayers as Bunny, left, and Moses Ingram as Chelle, react to Micah Peoples as Lank, arriving home after being injured by police during a dress rehearsal of Detroit '67 for the Chautauqua Theater Company on Thursday, July 20, 2017 in Bratton Theater. Detroit '67 was written by Dominique Morisseau and opening night will be on the 50th anniversary of the Detroit riots. PAULA OSPINA / STAFF PHOTOGRAPHER

Detroit, Michigan, is just over 300 miles from Chautauqua Institution. But inside Bratton Theater, a furnished basement bar from the city’s Virginia Park neighborhood is bringing Detroit and its history closer.

Chautauqua Theater Company’s production of Dominique Morisseau’s historic drama Detroit ’67 opened Friday and continues its run with shows at 2:15 and 8 p.m. Saturday and 2:15 p.m. Sunday in Bratton Theater. The weekend coincides with the 50th anniversary of the five days of civil unrest that reached a boiling point in the summer of 1967.

CTC is not alone in recognizing the play and the city’s history this summer, as period crime drama “Detroit” will hit movie theaters in August and venues throughout the Motor City are marking the anniversary. The Detroit Historical Society recently launched the multi-year community project and exhibit, “Detroit 67: Perspectives,” to educate and start discussion.

The Detroit-based project is themed “looking back to move forward,” and it could be said the cast and crew of CTC’s Detroit ’67 share that goal.

Unfolding on the eve of what are commonly called the Detroit riots — although there’s a growing movement to call the event a rebellion or uprising — Detroit ’67 tells the story of a brother and sister at odds over the family home and business. A Motown soundtrack helps guide and enliven the story, which also deals with interracial romance.

Although the play centers on an explosive moment in Detroit’s history, the story is not city-specific, said Broadnax, who is associate director of Pennsylvania Centre Stage and a professor of acting at Penn State University. Broadnax is familiar with Morisseau and her work, and the two spoke before the Chautauqua production got underway.

“Our playwright, Dominique, is so passionate about the city and her community and it’s an honor to help tell that story,” Broadnax said. “I’m not from Detroit, but I feel like I am now.”

At the start of rehearsal, Broadnax shared a list of themes he discussed with Morisseau. That list included community and family, brother-sister relationships, freedom and dreaming. Change, as well as how the historic events relate to current events, were major themes for both director and playwright, Broadnax said.

“Unless we examine our past and history, we will continue to repeat it,” Broadnax said, adding Detroit’s history is a shared history with other U.S. cities and the nation as a whole. “I do have an urge to tell this story because it’s still happening.”

In 1960s Detroit, 12th Street was the center of the city’s predominantly African-American inner city, as well as a center of nightlife. Nationally, the city was viewed as a leader in race relations, but locally, there were growing tensions, as many African Americans were dissatisfied with social conditions and progress.

When a police vice squad raided an after-hours club on 12th Street, which was hosting a celebration for the return of two Vietnam veterans, early in the morning of July 23, 1967, tensions reached a breaking point. Both black and white residents reacted, and arson and looting occurred over the next few days. Police, firemen, the National Guard and paratroopers responded, and dozens were killed and more than a thousand wounded.

As part of the CTC production’s dramaturgy, cast and crew received a 65-page packet covering everything from the history to music of the time. Included in the section on the history of the time was a quote from Carole Morisseau, the playwright’s aunt, who was in high school at the time.

“The spark could’ve been anything because people, black people who had fought and died in wars, who wanted in on the American dream, were fed up with being second-class citizens,” Carole Morisseau told the Minneapolis Star Tribune in 2015. “What we lost in the burning was innocence, naiveté, social order. What we gained was a sense of empowerment and a sense of how to change things. It was scary and energizing at the same time.”

“Detroit ’67 effectively captures a community coming to grips with its history and its future,” Monaghan wrote. “Its view of race relations is still timely, especially as the city debates the current hot topic of gentrification.”

Although deeply connected to the city in its title, the play opened in New York in 2013. Detroit ’67 is the first in Morisseau’s three-play cycle about her hometown and received the 2014 Kennedy Prize for Drama Inspired by American History. This summer, the play’s life in the Motor City will continue as Detroit Public Theatre hosts a series of free, public stagings of the show as part of a citywide initiative.

Now a few years old, Detroit ’67 has made the rounds on such major stages as the Public Theater and Baltimore Center Stage. A well-regarded and challenging play, Detroit ’67 naturally fits into CTC’s lineup. At the same time, CTC leaders and performers said they are interested in seeing how the show is received at Chautauqua, especially since it is usually performed in more metropolitan areas.

“I’m curious to see what it’s like to tell this story in Detroit, to sit in the audience in Detroit and watch the story, and sit in the audience with a non-Detroit audience,” Corporandy said. “I saw it in Baltimore, and that is a city that has also gone through similar things as Detroit. Chautauqua has not.”

Helping facilitate discussion at Chautauqua will be a series of talk-backs programmed after each performance of Detroit ’67. Corporandy, who will also travel to see performances of Detroit ’67 in Detroit this summer, said the company felt strongly about giving audiences the chance to respond — or sit back and listen — to continued discussion of the play.

Visiting actor Stori Ayers said she is curious to see how the audience at Chautauqua responds. Ayers, who also works as a personal assistant to Morisseau and will direct another of the playwright’s works this fall, has seen multiple productions of the play around the country. She also read the play six or seven times after being cast in CTC’s production.

She described her character of Bunny as bringing the culture of the 1960s to the storyline in the play.

“The play, for me, is infused with so much black culture,” she said. “I have seen predominantly white audiences and predominantly black audiences respond drastically different to the play because when there’s something that’s really familiar and you grew up with it and you know it, it resonates with you differently.”

Marlowe Stoudamire, a Detroit native and director of the Detroit Historical Society’s ’67 Project, suggested theatergoers do their own research into what happened that summer to better understand and absorb the message of the play.

Stoudamire saw Detroit ’67 when the play premiered in Detroit, and said he and playwright Morisseau attended high school together. He started working on the historical society’s exhibit, which will run through 2019, more than two years ago. The exhibit, which has received national attention, includes “a lot of storytelling” and drew on interviews.

That exhibit has already created both disagreement and conversation, Stoudamire said. Thinking about the Chautauqua production happening hundreds of miles away from Detroit, he encouraged viewers to consider how they fit into the Detroit storyline, which is an ongoing narrative.

“The audience, you need to ask them where do they see themselves,” Stoudamire said. “Or where do they see America today within this narrative? How does this intersect with their world? Because the key is, you want to figure out why this matters to somebody who didn’t live there and who wasn’t from there. Why would it matter to them?”