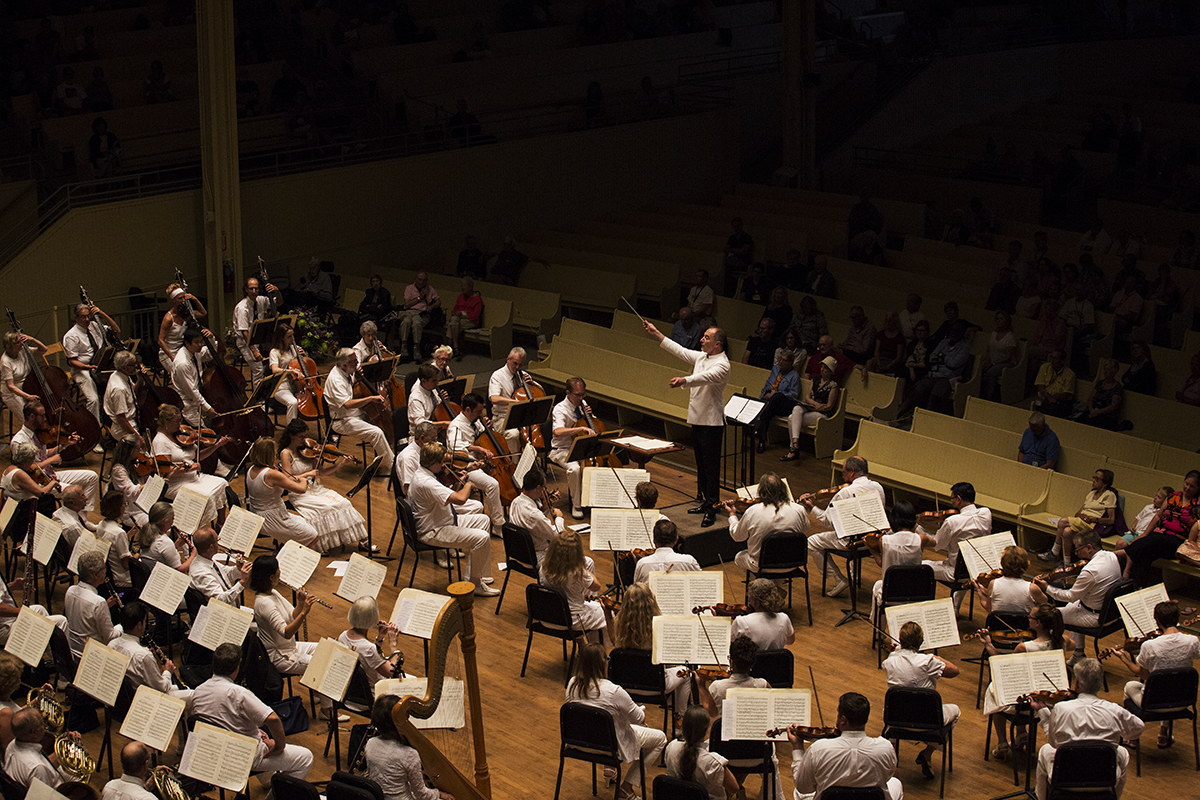 Chautauqua Institution has a history of combining its professional and student companies in multipronged, collaborative efforts.

“While these projects were wildly successful artistically, they did not have a life after Chautauqua,” said Vice President and Director of Programming Deborah Sunya Moore.

So this year, the Inter-Arts collaboration aimed to produce a work of art that will live on outside the Institution gates and beyond the nine-week season. The collaboration also has a distinctly literary inspiration: Sandra Cisneros’ The House on Mango Street.

At 8:15 p.m. Saturday in the Amphitheater, the Chautauqua Symphony Orchestra will open the evening with Leonard Bernstein’s rarely heard score to the Jerome Robbins ballet “Fancy Free.” Then, the CSO, Chautauqua Theater Company, the Charlotte Ballet and the Chautauqua Voice Program combine their artistic efforts for the world premiere of Derek Bermel’s “Mango Suite.”

The project’s central component is Bermel’s brand new score. The piece was commissioned by Chautauquans Francis and Cindy Letro, in honor of Tom and Jane Becker for their dedication to inter-arts programming, along with two other orchestras led by CSO Music Director Rossen Milanov — the Columbus Symphony Orchestra and the Princeton Symphony.

Wherever Bermel’s music goes after tonight, audiences will know it was first performed at, and partially paid for by, Chautauquans.

“Deborah (Sunya Moore) called me, and we spoke for a while about what kinds of projects would be most interesting to Chautauqua and to me,” Bermel said.

Bermel set about looking for a text that had personal appeal and could work across multiple art forms. Early on in his search, he found Cisneros’ novel, which is the Chautauqua Literary and Scientific Circle selection for Week Four. But Bermel set it aside, thinking a more poetic style of writing would work better with music. He spent several months reading epic poems by contemporary American Latino poets. In the end, he came back to Cisneros.

“I came back to The House on Mango Street because there was something so compelling about the story, and it started calling me,” Bermel said.

He started toward the end of the book and found a chapter in which Esperanza, the narrator throughout the novel, describes her ideal house.

“I thought this could be a beautiful song,” Bermel said. “As I started writing it I thought, ‘OK, this is good.’ ”

Bermel contacted Cisneros to see if she would let him write music based on excerpts from the novel. Cisneros agreed.

“What really sold me was listening to Derek’s music,” Cisneros said. “It just opened up a different range of emotions that I thought would match my story.”

In each of the vignettes that make up the roughly 50-minute piece, Esperanza will be portrayed by dancers, actors and vocalists.

“Understanding Esperanza was definitely a challenge because she isn’t a ‘Plain Jane,’ ” said vocalist Lindsey Reynolds. “She is a complex and strong character.”

“The character is a writer and she likes to tell stories, so in this production her imagination is so alive,” Pask said.

The House on Mango Street consists of 44 self-contained episodes which relate Esperanza’s struggles with assimilating and being marginalized at the same time. As a Puerto Rican woman, Pask said she feels a kinship with Esperanza. Yet, she recognizes the two have different stories. Pask grew up in Dallas, Texas, while Esperanza is a young Mexican-American girl growing up in Chicago.

Other parts of the story will be told through choreography by Charlotte Ballet Associate Artistic Director and Resident Choreographer Sasha Janes. He worked closely with CTC Artistic Director Andrew Borba to coordinate all of the movement that will be happening on the Amp stage.

“It’s a true collaboration,” Janes said. “We have to be very careful about making sure we don’t get siloed.”

Janes’ choreography, which he developed in a short period of time, integrates various styles of dance, including a lyrical ballad and a pas de deux performed en pointe. The dancers spent more than a week working on their moves. Along with learning and developing the choreography, dancer Juwan Alston said they’ve been trying to figure out how to mesh with everything else happening onstage.

“We were trying to figure out how we can really interact with each other,” Alston said.

Janes said projects like “Mango Suite” cultivate an appreciation for other arts not only in the audience, but also in the artists themselves.

“It’s great for dancers to sit down and see a really great actor deliver a monologue,” Janes said. “It’s also mind-blowing for an actor to see what these dancers can do with their bodies.”

“We’re all truly growing and gaining well-rounded knowledge about the arts,” Alston said.

To make a piece that is both true to Cisneros’ story and practical in performance, Bermel chose a total of 12 vignettes from the book as source material.

“A full dramatic realization of the text would have taken several hours to perform,” Bermel said. “Everything goes much slower when you sing it.”

Typically, when composers are inspired by literature, the result is either a tone poem or, if they want to use singers and dancers and scenery, an opera. Bermel’s “Mango Suite” includes aspects of both. It’s an orchestral suite that incorporates other elements, which future productions by other orchestras can omit. Making an evening-length opera would have required heavily adapting and shortening Cisneros’ book into a libretto so it could be sung within a few hours.

“It would have really required trying to recast the story,” Bermel said. “I didn’t even know if Sandra would grant me the rights for the piece in the first place.”

After he wrote some of the music, Bermel visited Cisneros at her San Antonio home.

“He presented what he was working on to me,” Cisneros said. “He wanted to know if he was on the right track, and I thought he did a marvelous job.”

Bermel was especially taken by the understated way Cisneros addressed white flight, alienation and assimilation. In a chapter called “Cathy Queen of Cats,” a girl who claims to be descended from French royalty says she can be friends with Esperanza, but only until the following Tuesday because the neighborhood is “getting bad” and Cathy is moving away.

“Cathy’s father will have to fly to France one day and find her great great distant grand cousin on her father’s side and inherit the family house,” Esperanza says in the book. “In the meantime they’ll just have to move a little farther north from Mango Street, a little farther away every time people like us keep moving in.”

According to Bermel, the story’s specificity is, paradoxically, what makes it so universal.

“It speaks to anybody who feels marginalized,” Bermel said.

The brief vignettes that make up Cisneros’ novel also challenge the old metaphor of America as a melting pot. To Bermel, America is more like “a stew that has some problems mixing. We don’t all melt together. Things don’t quite work like that.”

Cisneros’ childhood was itself paradoxical. She grew up in a house of nine, yet feels she had a boring and “very solitary” life. As a child, Cisneros imagined characters and cultivated a vibrant inner world, complete with its own music.

“I always imagined my life with a soundtrack,” Cisneros said. “Don’t you? Doesn’t everybody?”