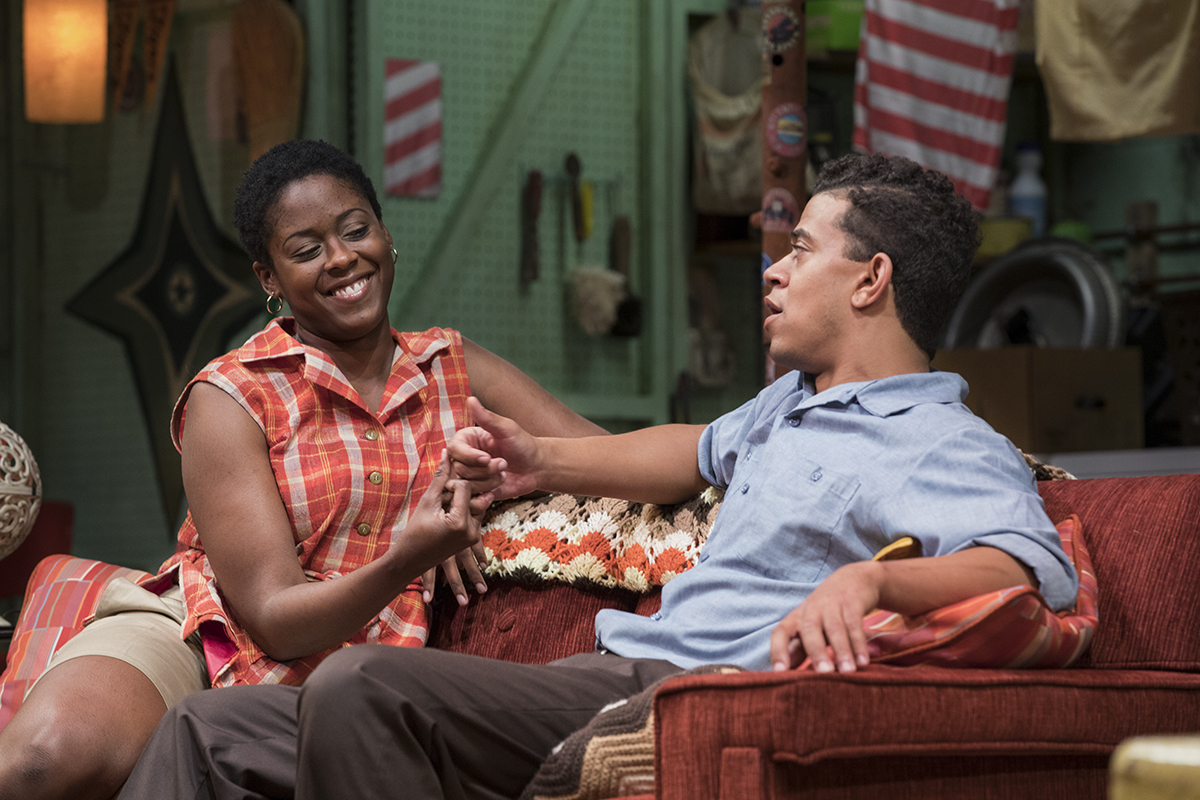 Micah Peoples as Lank, right, promises to Moses Ingram as Chelle not to waste their parents money from a scene from 'Detroit '67' during a dress rehearsal for the Chautauqua Theater Company on Thursday, July 20, 2017 in Bratton Theater. 'Detroit '67' was written by Dominique Morisseau and opening night coincided the 50th anniversary of the Detroit riots. PAULA OSPINA / STAFF PHOTOGRAPHER

An impassioned theatergoer might very well see two shows in one weekend. Driving five-plus hours to see two productions of the same show in one weekend? That’s dedication.

And that’s just what Sarah Clare Corporandy, who is managing director for Chautauqua Theater Company and a co-founder of Detroit Public Theatre, did last weekend when productions of Dominique Morisseau’s Detroit ’67 opened at both theaters. The historic drama uses what is commonly called the Detroit riots as backdrop to a story of family, and this past weekend marked the 50th anniversary of the civil unrest.

“As someone who didn’t go through the experience, it’s been really eye-opening for me to hear about what happened that day through this family’s perspective,” said Corporandy, who grew up outside Detroit.

When Detroit ’67 had its official CTC opening at 2:15 p.m. Saturday at Bratton Theater, Corporandy was there. (The play runs through Sunday, with a performance at 8 p.m. Thursday in Bratton Theater.) Corporandy then attended an opening weekend party with her CTC colleagues, caught the inter-arts “Mango Suite” collaboration at the 8:15 p.m. in the Amphitheater and hit the road for Detroit with her husband and toddler at about 10:30 p.m.

She arrived in Michigan around 3 a.m., and grabbed a few hours of sleep before seeing Detroit ’67 open again — this time as the first in a free series of shows from Detroit Public Theatre.

The play that was presented in a park on the corner of 12th Street and Clairmount Avenue didn’t feel like the same play Corporandy had just seen the day before, she said. For one thing, she was watching a pared-down production outdoors, with a different cast and no intermission. More importantly, she was seeing the play where the fictional Poindexter home at the heart of Detroit ’67 would have been located — and where the chaos broke out for five days 50 years ago.

“When I was watching it in the neighborhood where it happened, with people that lived there, and children and families, it felt — I’m still processing that,” Corporandy said.

The production was one of the several cultural events in the citywide “Detroit 67: Looking Back to Move Forward: A Community Engagement Project.” About 75 to 100 people were in the audience when the Detroit production started, Corporandy said. As the production went on, a crowd of about 200 gathered, she added. Detroit’s mayor, members of the Detroit Historical Society and cast of upcoming Hollywood movie “Detroit” were also in attendance.

Although Morisseau wasn’t able to be there, she sent a statement for Detroit Public Theatre to share before the play started.

“I am proud to be one of many powerful narrators from my city,” Morisseau shared. “I am proud to be an internationally awarded playwright for representing Detroit. And I am proud to participate in this urgent endeavor that inspires us to tell our stories our way.”

Now that Corporandy has seen Detroit ’67 in its historic home, she said she’s interested in seeing it once again at Bratton Theater. At Chautauqua, Corporandy said she experienced the play “as a human being in the greater picture of what’s happening across the country” and registered feelings of sadness, joy, compassion, shame and confusion.

At the Chautauqua opening, Corporandy also happened to be sitting in front of someone else from Detroit. Corporandy said she is looking forward to see what Chautauquans have to say in response to the production, whether it’s sharing their own memories or connecting the play to events today.

“Chautauqua is a place for conversation,” Corporandy said. “I want this play to live and breathe in this community for the next two or three weeks, and I want people to be talking about it after they see it, and I want that to move other people to come see it.”

Detroit Public Theatre, where Morisseau is a board member, became the first Motor City theater company to put on the play in 2016. That production had Steve H. Broadnax III as assistant director, and Broadnax is now directing the Chautauqua production.

The life of Detroit ’67 and Corporandy’s involvement in the play seems to be ongoing in Detroit. As she and CTC Artistic Director Andrew Borba began preparing for the play at Chautauqua, her Detroit colleagues learned they would receive a grant from the Knight Foundation that would help them take a production to different communities in Detroit this summer.

“Our hope in Detroit is that we will eventually get funding where it can just be something that we do every year, that we take it to the schools every year,” Corporandy said.

Rehearsals for both productions started the same day this summer. The experience has left Corporandy bouncing between the two projects, but she said it ultimately makes her better at both her jobs. As a producer, she’s had to think what’s the best way to tell a story to a community. The common thread in both productions is the play itself, and Corporandy said her goal is to tell the story “truthfully and beautifully” without getting in the way of the playwright’s work.

Corporandy, who returned to Chautauqua late Monday night, won’t be back in Detroit until the end of the summer. She finishes with CTC Aug. 22, and then goes back to work for rehearsals of Skeleton Crew, another play from Morisseau, starting Sept. 5.

“It’s good to be home; I miss it,” said Corporandy, who stayed with her parents in Ypsilanti, Michigan, because her own home was being rented out for the summer. “But I’m ready to come back and finish up the season. We still have a lot more to do.”