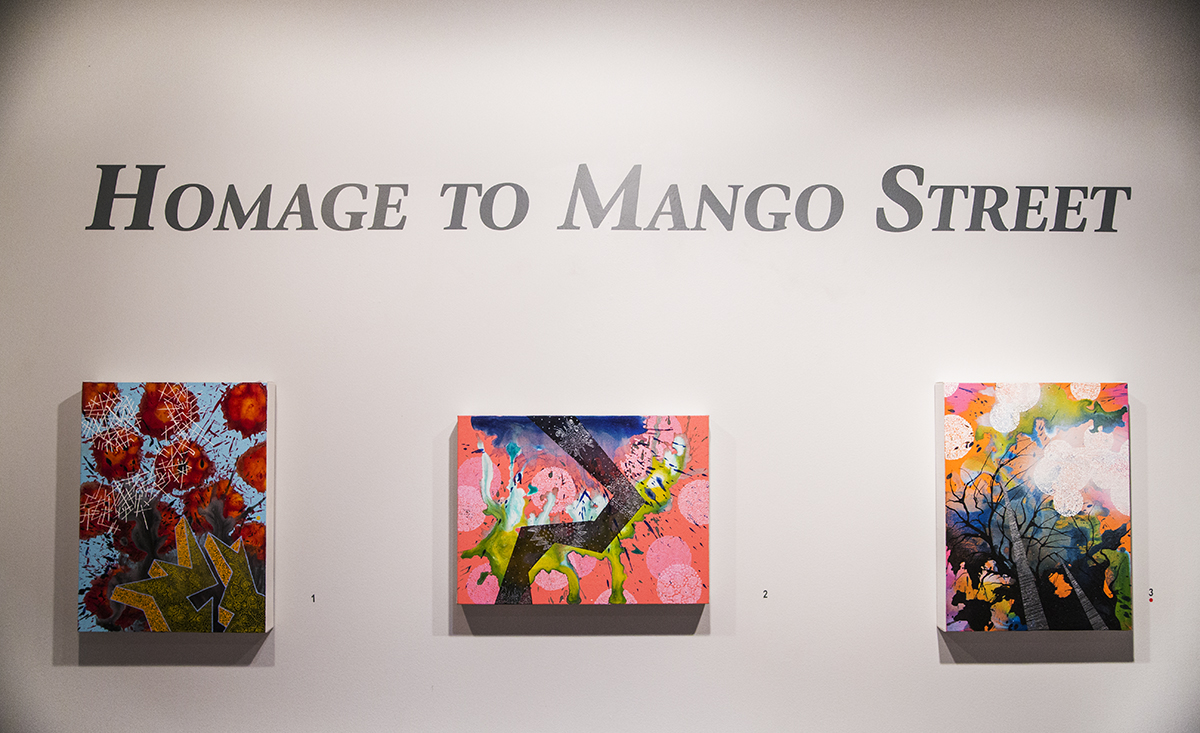 While there are several fine exhibitions currently on view at the Strohl Art Center (a roundup of contemporary landscape art; Erika Diamond’s sardonic tapestries based on imagery from How to Perform CPR pamphlets and airline seat back safety cards), “Homage to Mango Street” in the Gallo Family Gallery is distinctive for channeling the Chautauqua mission to promote dialogue between communities. Organized by Visual Arts at Chautauqua Institution Artistic Director Don Kimes in collaboration with New York gallerist Denise Bibro, the exhibit consists of paintings, works on paper and sculptures by seven Latino artists with roots in the Caribbean as well as in Central and South America. It makes its aim clear in a wall text that begins with an acknowledgement of our currently divisive political moment and concludes with Kimes stating: “In its own small way (‘Homage to Mango Street’) is an affirmation of the appeal expressed by Pope Francis not to build walls but to build and maintain bridges.”

It’s a worthy goal, if one that exceeds the scale of this small show — which, like any other, ultimately depends on the work in it. On that score, there’s plenty to appreciate with offerings running the gamut from the cosmic to the ironic.

The exhibit borrows its title from the book The House on Mango Street by author and MacArthur Fellow Sandra Cisneros (who will be speaking at the Chautauqua Literary and Scientific Circle Roundtable presentation on Thursday). It’s the story of a young Latina girl in Chicago, Esperanza Cordero, who struggles to invent herself in a world in which she’s a member of a minority — a journey not unlike the one taken by these artists, who also had to acclimate themselves to living in the United States after leaving their countries of origin. That effort to adapt informs the background, if not always the substance, of the pieces here.

Nature, as both a representation of universal truths and the persistence of memory, serves as the theme for most of the offerings here, including a series of acrylics on canvas and paper that greets visitors to the show. They are the creations of Daniel Borlandelli, a native of Uruguay living in New York City, who uses sprays of color and organic forms to evoke roots, plants and even more elemental forces: planetary orbs spinning and colliding in the celestial ether; pyroclastic flows erupting from volcanoes. Borlandelli overlays intricate tribal patterns over parts of his compositions to define certain shapes and give them an Amazonian ferocity. While Borlandelli conjures chaos, Joan Belmar, a Washington, D.C., artist born in Chile, invokes the music of the spheres with a visual architecture of overlapping discs that dynamically spins associations off into space. The title of her piece, “Blue Note: Looking Back,” for instance, references the famed Blue Note jazz label, and indeed, one corner of the piece contains a red circular shape ringed in a broad expanse of black — an obvious allusion to a 33 rpm vinyl record. Further additions of red, daubed around the record’s outer band like galaxies seen through the Hubble Telescope, establish a link between the open-ended possibilities of improvisation and the infinitude of the heavens.

The child of a Hungarian father and a Dominican mother, Paul Antonio Szabo has a mixed-heritage background that reverberates through his blend of European Modernism and folk-art motifs recalling his maternal homeland. In the smallish “Tulips Landscape,” a curtain of the titular flowers descends from the top of the frame as crimson, Picassoid blobs set against a tangle of stemlike elements in black and gray. In certain places, the latter coalesce into figurative forms, while the tulips themselves appear to sprout fingers. Like a ritual celebration encoded as petroglyphs, the composition takes on an ecstatic quality that overflows its modest dimensions. Carlos Luna, an artist who left Cuba in 1991, likewise adds modernist top notes to the artistic vernacular of his island home in “Catalina’s Mirror,” a vibrant Jacquard tapestry depicting the full-length profile of a woman surrounded by flora and fauna. A line cutting across the scene from left to right delineates the surface of a pool, which reflects the outline of a rooster standing opposite the woman in a kind of pas de deux: A dreamlike duet infused with sexual tension as the bird dissolves into a Rorschach blot of female desire.

Nearby, the heat of Luna’s imagery is tempered by cooler passions in a group of precise pen and ink drawings by Philadelphia artist Henry Bermudez, a Venezuelan native. Here again, nature plays a role as Bermudez contrasts geometric forms — a square, a line, a rectangular bar — with an overall backdrop of curlicue flourishes sprouting one from the next like Jack’s beanstalk. In several places, they clump together to form mum-like clusters. All is not serene, however, as one drawing, titled “Montana I,” features a jagged crack of negative space shearing off part of the image’s right hand side.

An inevitable consequence of nature, of course, is death and decay, invoked here in an oil painting on plaster by another Cuban-born artist, Alberto Rey, a former director/curator of the Chautauqua Center of the Visual Arts. His aptly titled “Aesthetics of Death VIII” is the largest work in the show, a still life of a silvery rainbow trout mottled by the first signs of decomposition. The fish is portrayed from the side, set parallel to the picture plane with its length nearly spanning the canvas. It’s actually a look down view of the animal floating on a stream, the murky shallows of which reveal leaves and rounded stones rendered in browns and blacks.

Of the artists, only Linda Vallejo deals directly with the politics of identity, or more precisely, the vicissitudes of living as a Latino within a dominant Anglo culture. The Los Angeles-born artist’s “Drunken Revery” is an ensemble of antique liquor decanters, each painted with a reproduction of a classic Norman Rockwell scene. Included are such fan favorites as the artist capturing himself in the process of painting his self-portrait, and another of a tattoo artist working on the bulging bicep of a sailor seated in profile like “Whistler’s Mother.” The reverse side of each bottle has an accompanying label for the picture on the front, its text censored in places by white correcting fluid. Rockwell is famous for gifting Americans with heroic images of themselves that celebrate their commitment to democracy and decency — a view wildly at odds with the experience of Latinos, or African Americans and Native Americans for that matter. Vallejo’s work offers a piquant commentary on a country besotted by its own mythology.

Vallejo’s piece squares the circle going back to the tale of Esperanza and her negotiation between where she’s from and where she lives. As written by Cisneros, Mango Street is more than a setting for a book: It is a metaphor for the difficulties of assimilating while staying true to yourself. In that respect, it is a road that runs through the heart of every work in this show.