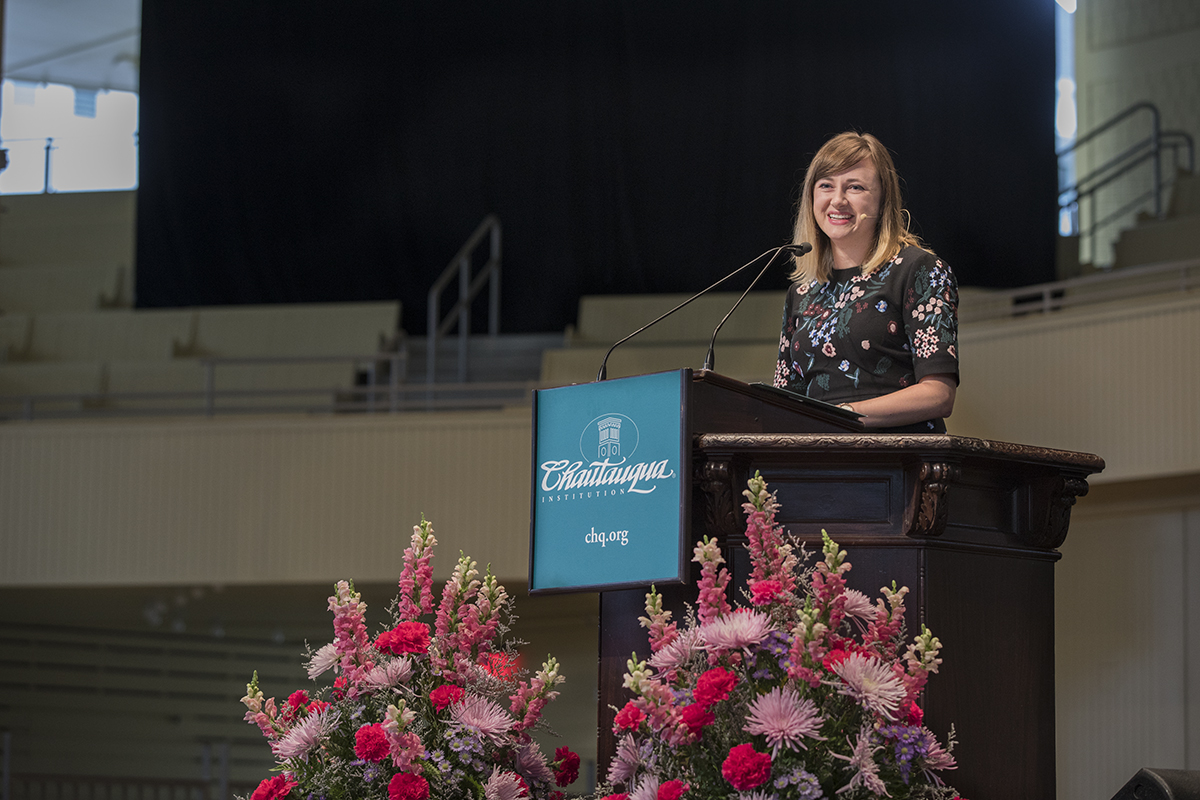 Editor-at-large for "Christianity Today," Katelyn Beaty delivers her lecture on "The Evangelical Crisis" on Tuesday, July 11, 2017 at the Amphitheater. PAULA OSPINA / STAFF PHOTOGRAPHER

Katelyn Beaty is standing on a stage; before her sits a sea of Christian leaders, an auditorium full.

“(Your) support for Trump … will prove to be a mistake,” she urges them.

But they do not do anything.

It is, after all, only a dream.

The night of the 2016 election, as Beaty drank cabernet and watched a red tide sweep over the electoral maps, she didn’t get much sleep. What little she did included one dream and one dream only: her, speaking to these faith leaders, trying to convey the damage wrought by mass evangelical support for the campaign of now- President Donald J. Trump.

Beaty is the editor-at-large for Christianity Today, a publication The Washington Post dubbed “evangelicalism’s flagship magazine.” Speaking Tuesday morning in the Amphitheater as part of Week Three: “A Crisis of Faith?,” she drew on her ties to that community in pursuit of an answer to the question of how 81 percent of white evangelical Christians could vote for a president who brags about never asking God for forgiveness.

“In the days after the election, I felt that I no longer recognized my own faith family,” Beaty said. “But I can no more disown that family than I can disown my biological family.”

Evangelical support for such a “decidedly unevangelical candidate” is not just a matter of political allegiance; it is also one of theology. And to Beaty, it reveals how “evangelicalism, as a movement, has drifted far from its roots.”

As someone situated “both within and outside” evangelicalism, Beaty is well suited for this sort of critique.

On one hand, her life is “rather Jesus-y.” She goes to the sort of church where people sometimes raise their hands, believes that the Bible is the word of God and desires to live a life that embodies love and mercy. She has even, on occasion, told strangers about Jesus.

“Evangelicalism is the rich soil into which my faith has been planted,” Beaty said.

Yet simultaneously, she is “somewhat of an outsider.” As evangelicalism has become more a political identity than a religious one, especially in the shadow of the religious right and their alliance with political conservatism, Beaty rejects the iteration of her faith that “look(s) and sound(s) like a voting bloc.”

“So today, if someone asks, ‘Are you an evangelical?’ I have to ask the follow-up question,” Beaty said. “ ‘Well, what does that word mean to you?’ ”

This is difficult to answer since “evangelicals are among the most misunderstood” of America’s religious communities, despite making up 25 percent of the population. Major journalistic publications get basic facts wrong about them, and Dean Baquet The New York Times’ executive editor even recently said that “media powerhouses don’t quite get religion.”

Of course, journalists aren’t the only ones unsure on what evangelicalism constitutes.

“Evangelicals themselves aren’t always sure who they are and who speaks for them,”Katelyn Beaty said.

In the days after the election, I felt that I no longer recognized my own faith family,” Beaty said. “But I can no more disown that family than I can disown my biological family.”

With a democratic, distributed, massively — even globally — diverse structure, evangelicals do not have a central authority to turn to for direction. There is, after all, no evangelical pope.

“In the vacuum of decentralized leadership, often the loudest voices, espousing the most extreme views, end up speaking for the whole family,” Beaty said.

This crisis of identity finds its roots in the very origins of American evangelicalism, with the 18th- and 19th-century religious revivals known as the First and Second Great Awakenings. As thousands-strong crowds were offered the chance for redemption through Christ, their faith moved away from ritualized institutions like the church toward the more individual, personal experience of “having one’s heart strangely warmed … by the Good News” of salvation.

“These revivals … were so successful that by the beginning of the 19th century, evangelicalism was the dominant expression of Christianity in the United States,” Beaty said.

From this background arose an emphasis on activism as core to their faith. Though figures like Billy Graham evidenced this impulse through mass evangelism, often in a form despised by outsiders, that activism has also been the “animating force behind great social good.” The Good News isn’t just meant to better the lives of individual believers, but to help society at large flourish.

The preacher Charles Finney, a central figure of the Second Great Awakening, made evident this distinction. A champion of temperance, humane treatment of prisoners, women’s rights and (most controversially for his time) abolition, Finney “left a long legacy of evangelical social responsibility.”

“While the old religious right was destructive when it launched the culture wars, the new internationalists — the new evangelicals — are saving lives in some of the most forgotten parts of the world,” Beaty said, quoting New York Times columnist Nicholas Kristof.

But now, in the wake of Trump’s election and the role evangelicals played in enabling it, it seems that Beaty’s faith family may be “reassuming the culture wars … (and) picking up swords when the world still needs the witness of ploughshares.”

When Martin Luther sparked the Protestant Reformation, replacing centralized religious authority with individualized biblical interpretation, he created the perfect conditions for a “strong man” to reassert authority in the absence of church hierarchy and scriptural uniformity.

This absence was then compounded with a more modern crisis faced by American evangelicals, many of whom yearned for security amid anxieties over a “perceived loss of dominance” and even a sense of themselves as a “persecuted minority.”

It was this need for structure that Trump met, and assurance against declining power that he provided.

“One of the most significant reasons I believe that … evangelicals supported Trump was because he promised to protect and defend their values and he spoke to their sense of being a minority,” Beaty said. “As he told a room full of leaders last summer, ‘Your power has been totally taken away, so we’re going to get your voice back.’ ”

Evangelicals had historically considered the character and identity of politicians when voting; and indeed, some did so when it came to Trump. Furthermore, many evangelicals of color “could not overlook (his) comments about racial minorities” and some evangelical women rejected his comments about sexual assault.

In the vacuum of decentralized leadership, often the loudest voices, espousing the most extreme views, end up speaking for the whole family,” Katelyn Beaty said.

Yet even then, the issue runs deeper than just the most recent election cycle.

“Trump has not created a crisis of identity for evangelicals,” Beaty said. “Rather, he has exposed the ongoing crisis.”

One part of this is confusion about the relationship between church and state: how far apart should the labels “evangelical” and “American” be held? Some churches mix the symbolism and rhetoric of their religion and nationality, while others embrace the international nature of their faith and support a movement of Christendom’s center to elsewhere in the world.

“(The latter) are not mourning the loss of Christian America because they believe that the future of the faith does not depend on the future of the United States,” Beaty said. “And they look for a day when people from every tribe and tongue and nation will be united in love and worship.”

Also vexing is the “relationship between personal faith and public witness”: Whom does religion exist to benefit? Some, like Rod Dreher of The American Conservative, say that the appropriate response to American evangelicalism’s decline is a withdrawal from public life. But others reject that sort of retreat, taking a page from the Gospel of James and working to “defend the dignity of humans … even those humans who (they) think are (their) ideological enemies.”

It is those evangelicals, who stand for social justice issues and work to end world crises even outside the bounds of their own faith, that Beaty sees as providing a chance for redemption in a post-Trump world.