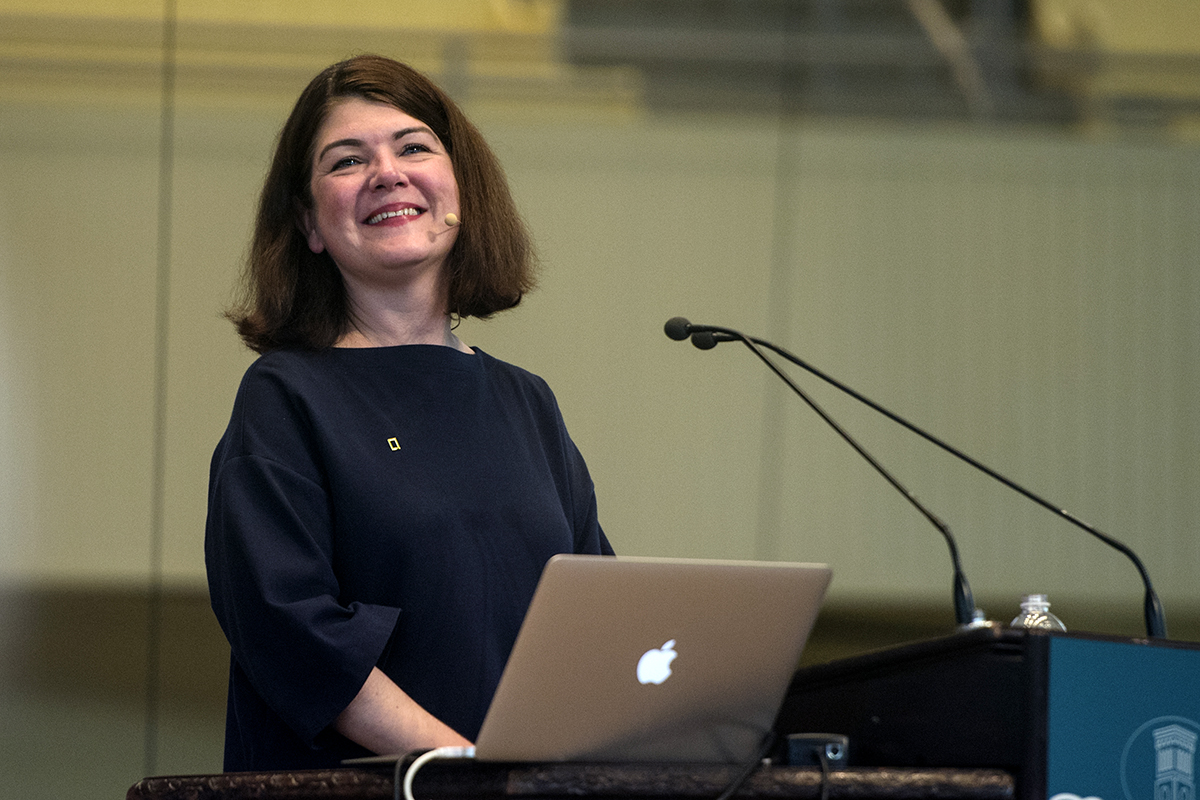 Kristin Romey, archaeology and paleontology writer at National Geographic, delivers her lecture "The Human Journey: Origins, Explorations and Preservation", in the Amp on Friday, July 7. A graduate of Vassar and Texas A&M, Romey is the former executive editor of Archaeology magazine. OLIVIA SUN/STAFF PHOTOGRAPHER

“In October of last year … I found myself in what is traditionally considered to be the tomb of Jesus Christ.”

So began the first of several stories that Kristin Romey would tell during her Friday morning lecture in the Amphitheater to close Week Two, “The Human Journey: Origins, Exploration and Preservation.”

An archaeology writer with both National Geographic magazine and National Geographic News and the former executive editor of Archaeology magazine, Romey has made a career of explaining academic archaeological concepts to general audiences. It was under those circumstances that she came to be in Jerusalem a few months ago, standing in the rotunda of the Church of the Holy Sepulchre, staring down at the Aedicule in which Christ is said to be entombed.

Romey had been brought in because the holy site was “falling apart … from fires and earthquakes and water damage,” so it had to be shut down for repairs.

“The six Christian religious groups that laid claim to the church finally agreed to restore it, and National Geographic was the exclusive partner to watch them on this process,” Romey said.

From the New Testament, Romey knew that Christ’s body had been placed in a rock-cut tomb of Joseph of Arimathea. Though this tomb was initially a modified cave, the first Christian Roman Emperor Constantine built a shrine and two churches around the site once it was recovered.

“And people (kept) coming back, because this is considered the most important site for the world’s largest religion,” Romey said.

Following the subsequent centuries of degradation, expert conservators had been brought in for the restoration, and Romey was there alongside them.

When it came time to finally open Christ’s tomb, which hadn’t been done in an estimated 500 to 700 years, there was fear that the momentous event would prompt a terrorist attack. Working on 24 hours, notice and “prepared to be locked inside of (the) church for 60 hours while the tomb (was) opened, inspected, and then closed back again,” the entire operation was kept very discreet.

The extra precautions proved worthwhile. Removing first the shrine’s outer marble cladding and then a second layer of shattered millennium-old stone, the excavators found “the original limestone of the cave.”

“This (was) the original surface of the burial bed that was identified in 326 A.D. as the final resting place of Jesus Christ,” Romey said.

It was just a hunk of limestone, but at the same time, it was so much more.

“The resonance that this had for the community was absolutely remarkable,” Romey said. Looking down, she remembers thinking, “people have fought and died for this little piece of rock for almost 2,000 years.”

It is that power — of seemingly inconsequential places and monuments and pieces of stone, and the “stories that grow out of them” — that Romey explores as an archaeological journalist.

But it was not always so.

Romey started off as an art history major in college. It wasn’t until being exposed to Kazimir Malevich’s “Black Square” painting that she reconsidered her plans.

“Me, being the philistine that I am, thought, ‘This is a black square,’ ” Romey said. “Then I thought, ‘You know what, I don’t really like anything that much after 500 AD.’ ”

She transferred to the classics department, where she became engrossed in ancient Greek writings that asked “how we fit in this world and how (we got) here.” Maritime travelogues that functioned “almost like a AAA guide (to) ancient Greece” and the cultural studies of Herodotus particularly caught her attention.

However, when it came time to find a job, Romey knew she didn’t want to just keep reading the same texts that had been read for thousands of years. So when an archaeologist came to her school looking to recruit volunteers to help explore “a Roman harbor on the Israeli coast called Caesarea,” she signed up.

“I was hooked,” Romey said. “I was absolutely hooked.”

With a better idea of her career aspirations, Romey went to graduate school to study underwater archaeology. There, she “realized that archaeology is not history”; rather, while the latter tells the stories written by victors, the former speaks to the everyday lives of everyday people.

Out of grad school she went to write for Archaeology magazine, where she came to recognize certain problems with science journalism — namely, the “negative feedback loop” whereby inaccurate or sensationalistic mainstream coverage of academia prompts good scientists to avoid the media and bad scientists to take their place. But as someone with both formal archaeological training and a gift for communication, Romey was in a good position to play that intermediary role.

After leaving the magazine and working in digital media for some time, Romey soon got her “next big break” and was invited to work on a site in a Kyrgyzstani lake.

“Right now we figure that the water levels are probably about 15 meters higher than they were centuries ago,” Romey said. “This means that (the) towns and cities that were originally built on the shoreline are now underwater.”

Funded by National Geographic and using technologies new (a drone) and old (a World War II rangefinder) alike, Romey’s team found the remains of a blue-tiled building underwater. They hypothesized that it was a forward operating base for Turco-Mongol conqueror Timur’s 14th-century empire, perhaps for a planned invasion of China.

But the discovery was not the only benefit of her involvement with the project.

“(National Geographic) hired me on as a writer, and now I do archaeology for digital and the magazine,” Romey said. “And I have had the privilege of being able to write about the great discoveries of our explorers.”

Having worked with ancient artifacts ranging from 750-year-old Russian homework to a Pompeii house sign warning “Beware of Dog,” Romey said that “human behavior has not changed.”

Also persistent over time has been the power of monuments and physical sites to hold immense cultural power, as Jesus’ tomb did. The Western Wall, the Colosseum, Plymouth Rock: “they represent what we think is important about us.”

Unfortunately, these sites holding such power also afford power to those who can destroy them. Terrorists like the Islamic State group understand that monuments “fill us with admiration and awe and understanding,” so attacks on those structures can serve as proxies for attacks on entire cities and cultures.

“One of the most terrible events that happened very recently that broke my heart was the destruction of al-Hadba’,” Romey said. “This minaret in the Iraqi city of Mosul had survived for almost 900 years. It was a symbol of Mosul; it was like the Eiffel Tower of Mosul.”

And they blew it up.

“(The Islamic State) knew that the biggest pain they could inflict on the citizens of Mosul as a group, as a city, was to destroy al-Hadba’,” Romey said.

A similar situation occurred at Mahram Bilqis, the Moon Temple of the Queen of Sheba, a central Yemeni site where Romey worked in 2007. The temple became another “casualty of war” when al-Qaeda detonated a car bomb there in 2008. Since then, “nobody has been back.”

Looting is also putting pressure on her field.

“We lose an incredible amount, an unknowable amount of information (from looting),” Romey said. Working with the Department of Homeland Security on busts, she has seen some cultural artifacts returned to their countries of origin — like an Egyptian sarcophagus cut into four sections for display in a living room — but the scale of the problem remains huge.

“We do have to bear witness to that, and that’s what National Geographic does,” Romey said. “We write about this. We make people aware of what the collateral damage is.”

Yet even as the modern age of archaeology faces problems new and old, the 21st century also affords new opportunities for Romey’s work. Satellite imagery, remote sensing technology, ground- and vegetation-penetrating radar; new technologies have made the discovery of ancient secrets easier than ever before.

“We can tell these stories of the human journey in such a way that it helps us figure out, ‘How on Earth did we get here,’ ” Romey said. “How did this journey begin? Where is it going? What are we doing? And archaeology is so critical to understanding that.”