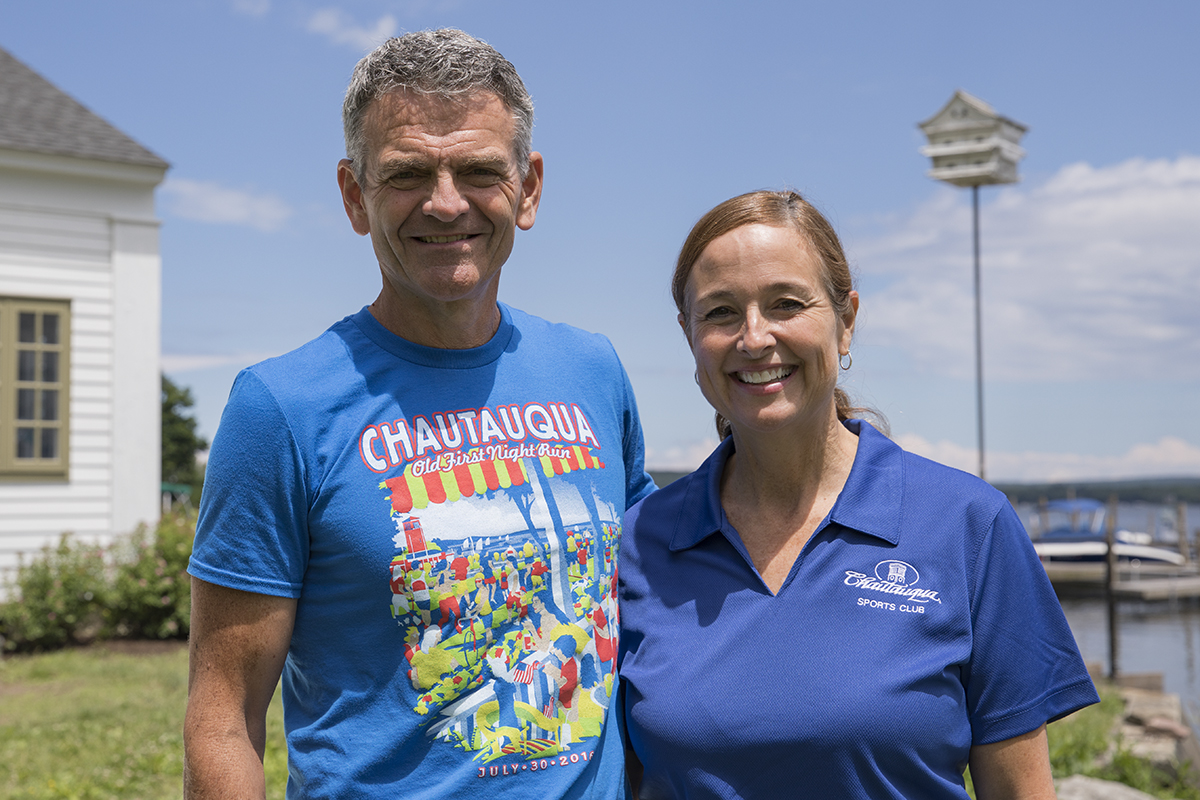 If it wasn’t for a snowstorm that stranded Deb Lyons in Pennsylvania over the holidays, she may have never met her husband, Dana.

In 1983, Deb was coming home to Bemus Point when her plane got stuck in Pittsburgh. She took a bus, but only made it to Erie, Pennsylvania, before poor visibility and dangerous road conditions forced the bus to stop.

Deb’s brother-in-law asked his fraternity brother Dana, who had returned to Erie to spend Christmas with his family, to check on her. Dana invited Deb to stay with him and his family until her family could come pick her up.

Unable to get a ride home, Deb ended up spending Christmas there.

One year later, they were engaged.

“It’s a great way to meet your in-laws,” Deb said.

Deb and Dana Lyons have been working together for the last five years at Dana’s Finish Strong Coaching in the Woodlands, Texas, where Deb acts as administrator and Dana coaches. This summer, the couple take on a new challenge. Deb takes over as the new Sports Club director and Dana becomes the Old First Night Run/Walk coordinator.

Between the two, they bring more than 12 years of fitness and lifestyle management and coaching experience.

Although both are outdoor and sports enthusiasts, Dana sparked the Lyons family’s foray into fitness.

After working as a chemical engineer for more than a decade, Dana wanted to find a way to spend more time with his daughters and stay close to home. In college, Dana ran cross-country and track for Grove City College. Years later he started participating in duathlons thanks to his parents’ passion for cycling. With the potential to make his passion for running and biking into a career, Dana started his own business, Finish Strong Coaching, in 2004.

“I figured maybe I could do some coaching and possibly turn it into a full-time job,” Dana said. “Within six months the business started taking off and I never looked back.”

From there, Dana expanded into the world of triathlons, coaching a variety of age groups as the head of SelecTRI Youth and Junior Organization. He also stayed active, qualifying for the 2008 Ford Ironman championship in Kona, Hawaii.

“The toughest part is mental,” Dana said. “You can’t fake it.”

The rest of that year would prove to be grueling for Dana as he trained 25 hours a week for 13 months.

“I didn’t end up in the hospital, so it was fun,” Dana said.

While Dana’s coaching business continued to grow, Deb looked for something different after working in a children’s ministry.

“Our kids were getting older and I felt like I was missing out on their high school years,” Deb said. “When he was looking to hire, I thought, who better than me to do that.”

“It wasn’t part of the original plan,” Dana said. “I thought it was going to be me coaching 20 people. I never envisioned it’d grow to coaching 500 people a year.”

With the rapid growth of both his businesses, Dana knew he needed a marketing and business savvy administrator to handle work behind the scenes. His wife just happened to fit those qualifications.

“It became obvious that if he wanted to continue to grow his business it’d be a good fit to work together,” Deb said.

“It got to the point where it made the most sense to bring her in,” Dana said.

Since then, Deb and Dana have continued to grow the business into one of the top coaching services in the country.

Deb wants people to take advantage of the services the Sports Club offers.

“Some people don’t know what we do here,” Deb said. “For the longest time I didn’t know we had horseshoes and I’ve been here since (I was) 4 years old. We rent kayaks, canoes, paddleboats and so much more, we just have to get the word out.”

As a child and adolescent, Deb spent her summers at Chautauqua Institution at Boys’ and Girls’ Club, where her father, Dick Marks, served as financial manager for more than 30 years.

Her love for Chautauqua never faded, and she tried to spend as many weeks there in the summer as possible to give the kids the Chautauqua experience.

The couple’s favorite thing about Chautauqua comes down to the people and continued learning through the programming.

“I try to get to as many programs as I can,” Dana said.

“I love the people,” Deb said. “There’s so many interesting stories. You never know who you’re going to meet.”

While Deb and Dana each have different roles within the Sports Club, in the end, they are a team, supporting each other through thick and thin.

“We have the same goals,” Deb said. “Not every couple can work together, but for us, it just works.”