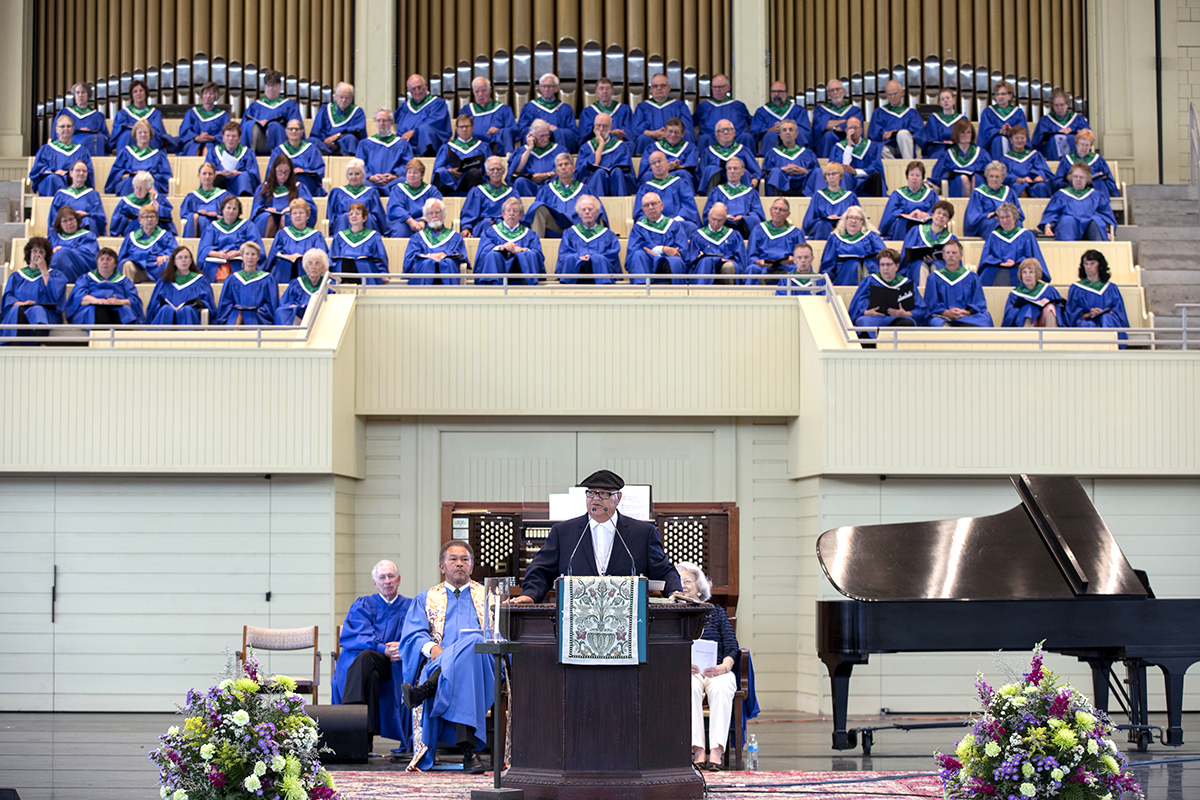 Rev. Isaac Canales delivers his sermon on "Don't Forget to Remember" during the Sunday morning worship on July 16, 2017 at the Amphitheater. PAULA OSPINA / STAFF PHOTOGRAPHER

“In a crisis of fear, when we face a crossroad, we have to make up our minds to continue in faith, hope and trust in God, or are we going to pay more attention to the circumstances than God,” said the Rev. Isaac J. Canales at the 10:45 a.m. Sunday morning worship service in the Amphitheater. His title was “Don’t Forget to Remember,” and the Scripture reading was Numbers 13:1-16 and 32-33.

“My title is something of a Yogi Berra-ism,” Canales said.

He and his wife bought breakfast sandwiches for their flight here since there would be no meal service, and “Mexicans and pretzels don’t mix.” As they sat and opened up their sandwiches over Kansas, Canales asked his wife if she brought the insulin. She said she thought he had brought it; it was on her checklist but she forgot to look at the list.

He was accusing her of forgetting to remember. Luckily, it was all right when they arrived and they got the medicine they needed.

God had promised the people of Israel a land flowing with milk and honey — the milk and cheese of goats and the honey and sugar from dates. But fear came upon the people as they waited to go into the promised land.

“Their fear brought a loss of memory of what God had done for them,” he said.

In Numbers, Moses sends spies into the land of Canaan and they come back with a report cautioning against taking over the land. It was a land of giants, they said, that devoured its own people, and the Israelites looked like grasshoppers in comparison.

They forgot that God had brought them out of the land of Egypt, that God opened the Red Sea for them to cross, that God gave them manna and quail in the wilderness, “without a bakery or butcher shop in sight.” God gave them water from a rock, shade by day and fire by night.

“When we face crises, we are tempted to despair, to give up on hope and we turn to the solutions of our own mind and heart and we forget how strong God is,” he said. “We tend to look at the size of the giants rather than God.”

Fear results in a loss of courage and perspective. The spies started to think on their own, instead of thinking with God on their side.

Hope and faith are necessary today, too.

“We can’t give up on God and stop praying for our president,” Canales said. “He needs prayer and God is still in charge. God is never out of control; he is always in control of everything.”

The spies saw a mighty civilization when they were in the Canaanite city of Hebron. Canales said that fear makes us lose focus. Even the names of some of the spies had fear in them. Shammua, who came from the tribe of Reuben, has a name that is translated as “puts the lie to the words of the Holy One.” Nahbi, from the tribe of Naphtali, means “hid from the words of the Holy One.” They believed the lie that they were only grasshoppers to the giants.

“It was the lie of rationalism and lack of hope,” he said. “When we are too rational and exclude the mystical hand of almighty God, when we forget that he brought us through every crisis, we try to solve the problem without faith and trust in God and Jesus through the Holy Spirit.”

We lean on things that are handmade, we trust too much in technology, he said.

“Not by might nor power but by my spirit, says the Lord,” Canales said. “God told Moses at the burning bush to take off his handmade sandals as a sign of trust that he was on holy ground.”

There were two spies whose names point to trust in God, who remembered what God had done. Caleb means dog, a sign of faithfulness, and Joshua means “the Lord is our savior.” They had faith when the others did not.

Nine years ago, Canales was given a 1 percent chance to live by his doctors. They had to remove his colon and large intestine and revive his heart 21 times. They gathered his family and said there was not much hope, except for one radical procedure they could try.

“The emergency room was packed out with people praying for their pastor. My wife said I had a 99 percent chance with God and to do the operation, and here I am,” he said. “I asked the Lord why he has given me my life and he said ‘To encourage people.’ Nothing is impossible with God if we don’t forget to remember. And God can do it again and again and again.”

Caleb and Joshua represent the minority report of faith and hope.

“We are a minority around the world,” Canales said. “But a mustard seed in the hand of God is a miracle. Caleb and Joshua are symbols that in every ‘no’ (in the world) there is a ‘yes’ from God.”

To trust in God is our hope, he said.

“Jesus is the hope for my salvation,” Canales said. “What he has done for others, he can do for you.”

Fear begins with a loss of memory and fear without faith forgets the great covenant God made with Israel to be his people. Fear makes people lose heart so that we see the Canaanites as giants.

But God made grasshoppers and a grasshopper with God is a helicopter, he said.

“When we lose perspective, we are truly alone; we are defeated before the battle starts,” Canales said. “In the face of a crisis, don’t forget to remember what God has done in the past. Faith plus God equals a miracle.”

The Rev. Robert M. Franklin, Jr., director of the Department of Religion, presided. Judith Davidson Moyers, president and CEO of Public Affairs Television Inc. and life partner of Bill Moyers, read the Scripture. The women of the Chautauqua Choir sang “Samba de las Escrituras (A Scriptural Samba),” by Ken Berg. The responsorial Psalm 91, “Be with Me Lord,” was written by Marty Hagen; Peter Steinmetz served as cantor. The offertory anthem was the world premiere of “Chautauqua Anthem” by Paul Moravec. The Motet Choir commissioned the piece in honor of Jared Jacobsen’s more than 20 years of service to Chautauqua Institution. The organ postlude was “God Among Us (La Nativité, IX),” by Olivier Messiaen. Jacobsen, organist and coordinator of worship and sacred music, directed the Chautauqua Choir. The Robert D. Campbell Memorial Chaplaincy Fund and the Lois Raynow Department of Religion Fund provide support for this week’s services.

Larry Greenfield to advocate for an ethical global citizenry

Children invited to practice skills by reading to a therapy dog