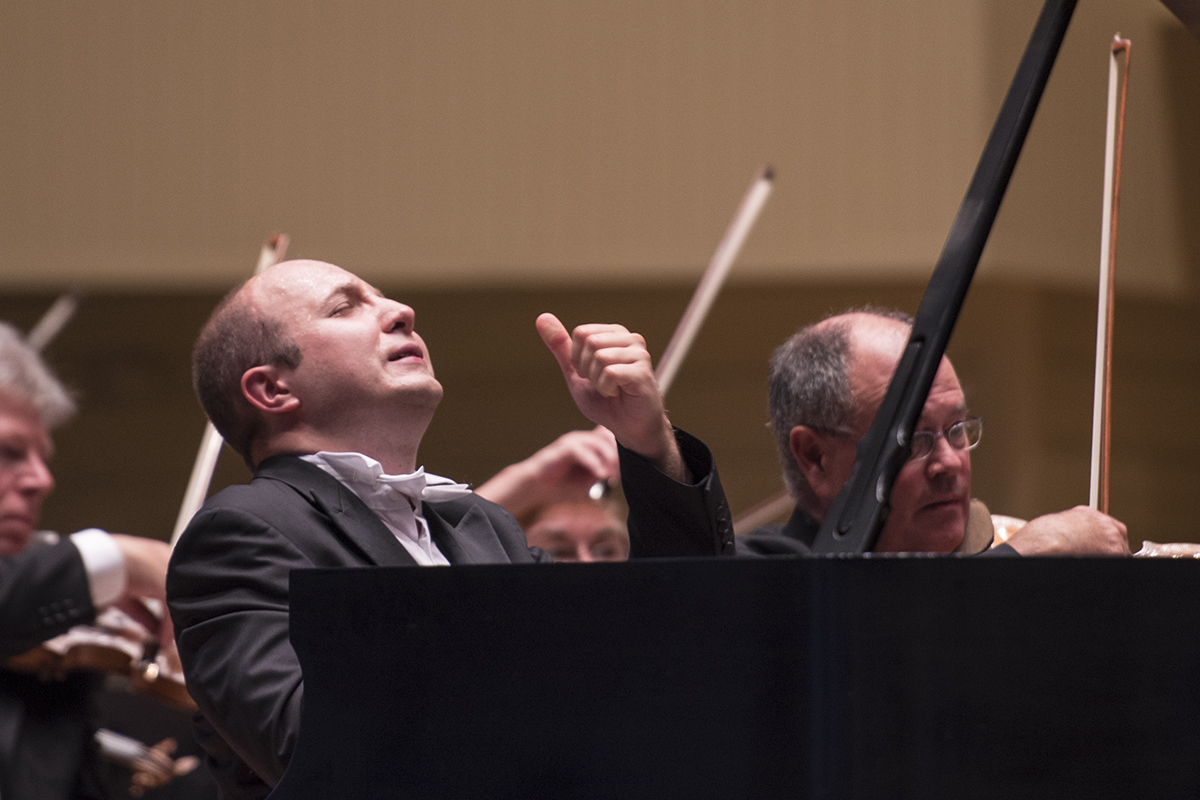 Less than a week after performing Tchaikovsky’s Piano Concerto No. 1 with the Chautauqua Symphony Orchestra, Gavrylyuk will perform a solo recital at 8:15 p.m. Wednesday in the Amphitheater.

The recital will explore turbulent times in Eastern Europe by emphasizing two composers in particular: Sergei Rachmaninoff and Frédéric Chopin.

As Marxism gained a foothold in Russia with the rise of the Bolsheviks in the early 20th century, the elegiac tone of Rachmaninoff’s music became a trenchant commentary on the state of his homeland.

“Everything he loved about Russia was being killed and destroyed,” Gavrylyuk said. “He’s basically putting a cross on the things which were not going to live anymore, for the country and for himself.”

The third of Rachmaninoff’s Moments Musicaux, Op. 16, is a clear example.

“There is this unanswered question,” Gavrylyuk said. “It’s always going up, but it never gets resolved until the end. It’s very sad.”

At other times, Rachmaninoff’s music looks back at his country’s lost nobility. One of his most-performed preludes features a grand, lyrical section flanked by brusque, march-like music.

“The G minor prelude is a reminiscence for the aristocracy that was being lost,” Gavrylyuk said. “It’s a bright, wonderful memory of the honor and nobility that was the case back then.”

Chopin also had reason to miss his homeland. Although he first left Poland by choice to make a name for himself in Vienna, Chopin was forced to remain there after a revolt against Russian rule began in 1830. He eventually found a new home in Paris.

“That perhaps contributed to some of the finesse, the French influence and environment there,” Gavrylyuk said.

Shortly after moving to Paris, Chopin composed a set of 12 études which embody a unique mix of Polish and French influences.

“Étude No. 8 has this uncontrollable, youthful joy and happiness of life,” Gavrylyuk said. “Étude No. 9 is very introverted, not quite outspoken yet. Very tormented, yet tender, hopeful and bittersweet.”

Chopin wrote the 11th étude with large, tall chords throughout. To dissipate the weight of the chords and encourage a more vitreous sound, Chopin marked them arpeggiato, meaning they should be played in a broken style, almost like a harp.

The 12th étude is perhaps the most famous of the set. It was written around the time of the uprising in Poland and is transparently nicknamed the “Revolutionary Étude.”

“How can this not be about Poland?” Gavrylyuk said.

The recital will end with Rachmaninoff’s Piano Sonata No. 2, a work that exemplifies the insecurity and self-doubt that plagued the composer throughout his life. More than two decades after the sonata’s premiere, Rachmaninoff created a more conservative, scaled-back version.

“The first edition is much heavier and longer and really intense,” Gavrylyuk said. “It was common in those days for composers to be criticized for making things too rich, too heavy.”

To some, Rachmaninoff’s emotional effusions seemed histrionic and old-fashioned at the turn of the century. A much more logical and mathematical approach to composition, similar to the isomelodic practices of medieval music, was on the rise in Europe and in the United States.

Rachmaninoff evidently wasn’t satisfied with his new version of the second sonata, either. Piano virtuoso Vladimir Horowitz approached him, and, with the composer’s blessing, created a third version.

“Rachmaninoff often said Horowitz played his music better than he would,” Gavrylyuk said. “Whether that was out of courtesy or a sincere comment one never knows.”

Gavrylyuk considers the second version to be an improvement over the first edition, “although it depends on your mood and mindset at the time.”

“In terms of the whole picture of the sonata, perhaps (the revised version) is a bit more organic, more natural,” Gavrylyuk said.

By contrast, Gavrylyuk said someone listening to the first edition might suffer from information overload.

“It requires much more from the listener,” he said.

The second sonata requires a lot from the pianist, too.

“It was not by any means a mathematical creation, so to speak,” Gavrylyuk said. “It was an outpouring from the heart. One has to respect that. I look at phrasing, layers of structure, and how you make them interact with each other.”

Gavrylyuk said the internal and external forces that shaped Rachmaninoff’s music and continue to reverberate more than a century later.

“It’s so easy to relate that music to our time,” Gavrylyuk said. “Think about the ongoing wars in the world and how many people have lost everything.”

According to Gavrylyuk, Rachmaninoff’s personal tragedies connect to global struggles.

“The real tragedy is that as humanity we don’t learn from our mistakes,” Gavrylyuk said. “This music never stops being relevant.”