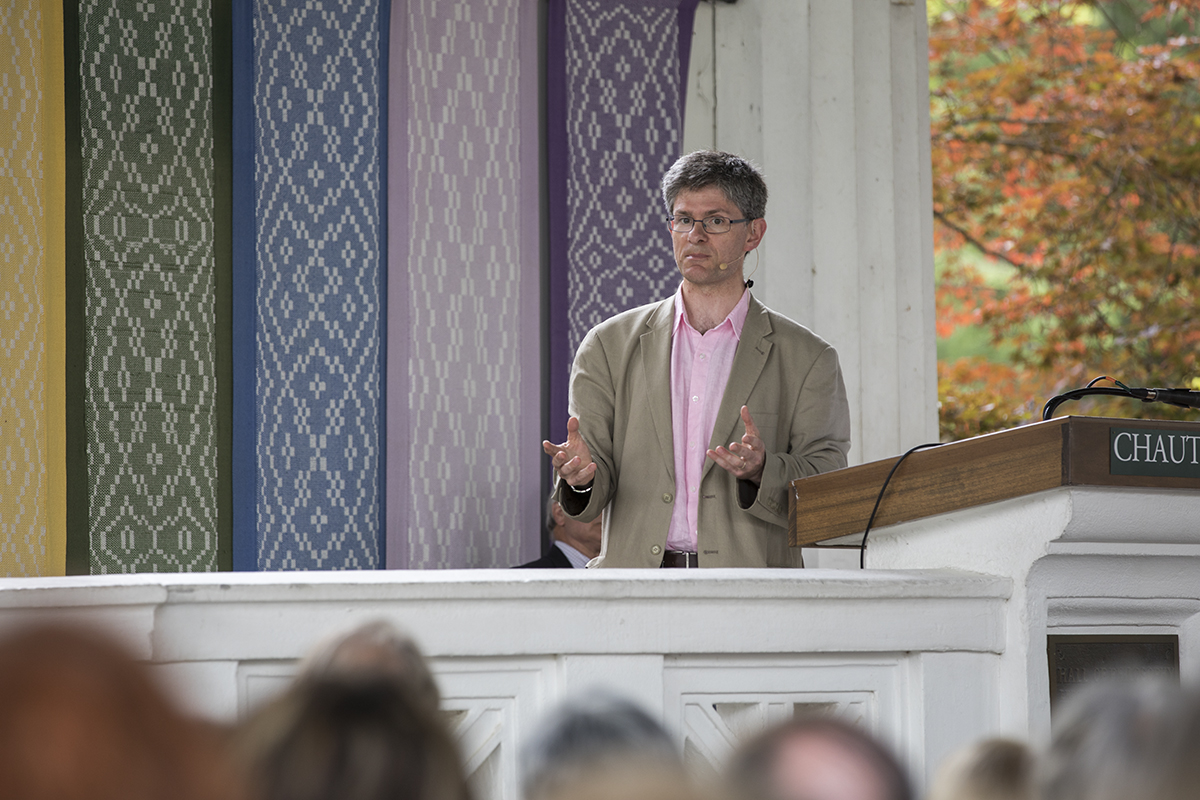 Professor Alec Ryrie delivers his lecture on "Protestants: The Faith that Made the Modern World" as part of the interfaith lecture series on Friday, June 30, 2017 in the Hall of Philosophy. PAULA OSPINA / STAFF PHOTOGRAPHER

Alec Ryrie is in favor of dropping the “-isms” from his vocabulary.

“The history of religion, it seems to me, is the history of people,” he said. “It too often gets told as a set of abstract concepts, which can tell you everything and nothing about the subject. It’s all very well to learn what people believe, but the vital, I think, to understand is why they believe.”

Ryrie, professor of the history of Christianity at Durham University in the United Kingdom, spoke about the humanity behind the Bible Friday afternoon in the Hall of Philosophy, wrapping up Week One’s interfaith theme “Inventing God? A Brief History of Religions.”

To further his point, Ryrie discussed three historically significant Protestant figures, each one reflecting the faith in a different way. Between them, he said, the audience would be shown the faith’s “variety for both good and ill.” The first of these was Martin Luther, the 16th century face of the Protestant Reformation.

“I don’t want to dwell on him as a thinker,” Ryrie said. “His Christianity was a matter of the heart and of the guts more than it was of the intellect.”

During his time in monastery, Luther was at a spiritual low point. Ryrie said Luther felt imprisoned by his own sinfulness, “its grip on him (growing) stronger.” It wasn’t until college that he heard the Christian gospel in a way that encouraged him to make a 180-degree turn.

“Before any of this was a theological system for Luther, it was a love affair,” Ryrie said. “Luther discovered that God loved him and forgave him in a way that he has never imagined before. And it unlocked in him an absolutely, recklessly extravagant passion which he pursued beyond all the bounds set for him by church and by tradition. This was an intense, desolating but also intoxicating passion for God, sparked by his life-upending glimpse of God’s incomprehensible, terrible, beautiful love for him.”

The main characteristic which swept Luther off his feet was the Bible’s promise that humans did not have to give God anything in return for his affections. At times, though, Luther abandoned this premise; when he started the Reformation, Ryrie said, “he was only truly looking to start an argument.” The church hierarchy was furious with him, but Luther saw this as a step of obedience in his love story with the Lord, defending what he believed God wanted even if others disagreed.

“(God’s love) wasn’t a process,” Ryrie said. “It wasn’t a negotiation. It wasn’t an offer. It certainly wasn’t a reproach. It was a mere gift. … That’s when he discovers within himself fantastic reserves of stubbornness.”

Because of a defiance of the establishment, including his distribution of overtly political pamphlets, accusations of heresy, theological critique of Catholicism and declaration of the Pope as the anti-Christ, Luther was summoned to trial to be condemned. Ryrie said Luther “fully expected to become a martyr. But he went anyways, traveling like Christ to Jerusalem.” He was asked to “recant his errors.”

“Much as he might wish to, his conscience was captive to the word of God,” Ryrie said. “He would only recant his view if it could be shown to him in the basis of Scripture and Scripture alone that he was wrong. He expected that moment of defiance was going to cost him his life. Instead of costing Luther his life, it defined it for him.”

Secondly, Ryrie recounted the story of Rebecca Protten, an Antiguan woman born into slavery in 1718 who was kidnapped and sold to a wealthy Dutch family, who raised her in the Calvinist faith. When she was freed as a teenager, she heard the gospel preached by a group of German missionaries, reaching up to 4,000 slaves. Protten became one of their first converts, and she began to use her newfound wisdom, alongside of her multilingualism, to visit slave quarters, preach to women and organize study groups.

“She’s obviously an extraordinary black woman,” Ryrie said. “The one portrait of her has her wearing a suppressed smile that makes the Mona Lisa look like an open book.”

Ryrie discussed Protten to indicate the global rise of Protestantism, a phenomenon that seemed to advance from country to country.

“Luther’s original love affair was starting to spread out across the planet, seeping into all sorts of social spaces, dissolving structures of discrimination like acid with its amazing subversive principle that all human beings stand directly and equally before God,” Ryrie said.

Finally, Ryrie told the story of Walter Grundmann, a German theological researcher in the 1930s. Grundmann was handpicked to head a startup research institute at Wartburg Castle in Eisenach, Germany. It was there that he and his team worked to bring about a “second Reformation,” eradicating Jewish influence in both the Old and New Testament.

“They wanted to forge a religion which, to them, felt recognizably Christian, but which was sufficiently anti-Jewish that the Nazis could accept it as their official creed,” Ryrie said.

Where Hitler’s aspiration was for Christianity to die a natural death, German Christians were partnering with military chaplains to communicate a message of promise to World War II soldiers. Grundmann personally believed a “de-Judaized” Christian faith was a moral and political priority. The institute aimed to create a sort of middle ground: a “context-free” faith with traditions that weren’t directly Jewish, but with common texts and prayers.

This led to publication of The Message of God, a “de-Judaized” Bible, its text purged of any references to Jewish ideas. The Old Testament was entirely gone, the New Testament was “heavily redacted” and Jesus’ racial identity was skewed. The apostle Paul’s Jewishness is one of the only elements that could not be avoided.

“There’s not much in it except for militaristic triumphalism and domestic sentimentality,” Ryrie said. “The regime still had no wish to sponsor this almost content-free faith.”

Ryrie’s goal in sharing these biographies was to show that people who proclaim faith can propel it, like Protten, or can retract it, like Grundmann. In other words, Protestantism can, in fact, include both heroes and villains.

Ryrie made two primary points: first, that the balance between these two extremes has gone astray, and second, that there must be a hidden “third strand” of Protestantism. Ryrie said people must acknowledge one primary event that shaped humanity’s very definition of evil — World War II.

“Since defining good and evil is traditionally something religions are supposed to do, the arrival of this essentially secular moral standard has been deeply disruptive to the moral authority of religions, especially of Protestantism,” Ryrie said.

Since World War II, he said, Protestants have taken a stand on several “secular” historical events, including the “separate but equal” doctrine and the civil rights movement. Protestants became more political, but Ryrie said that doesn’t always prove successful.

“If you turn your religion into a vehicle for political activism, instead you abandon your religious principles and end up just pursuing political ones,” he said.

Luther, according to Ryrie, proclaimed that government was solely established for the purpose of “making limited semblance of peace and order possible”; however, he said, it should not remain the sole focus of religious people.

“It’s necessary in a humdrum way for as long as this passing world endures, but Christians shouldn’t pay too much attention to it,” Ryrie said. “Their hearts should instead be set on the kingdom of Christ, where there’s no law and no coercion.”

He discussed one Christian group which he saw to be the most resistant to the political power of the Nazis. In 1937, they secretly distributed 300,000 copies of a publication that called Hitler “apocalyptic,” while also remaining “the most doggedly apolitical (group) in all of Germany.”

“Protestantism is not about politics, it’s about God,” Ryrie said. “The salvation that it preaches, that Luther discovered centuries ago, isn’t spiritual. It’s a kind of undersea earthquake. … Once the waves it lets out hit obstacles and crest into tsunamis.”

Ryrie said Protestants should be bringing people toward neither the left nor right wing, but toward heaven.

“When an overwhelming encounter with God turns your world upside down, nothing, including your politics, is going to be the same,” he said. “But if we misread those secondary effects as primary, we’re going to misunderstand the whole thing.”