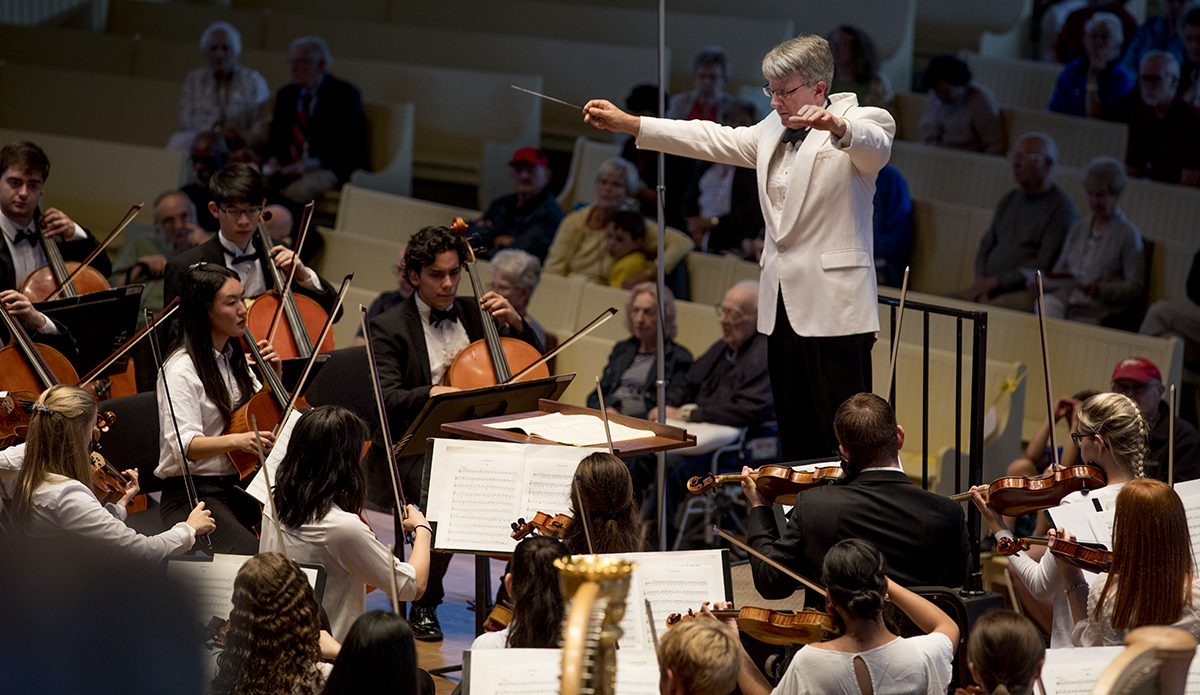 Timothy Muffitt conducts the Music School Festival Orchestra during their first performance of the season on Monday, July 3, 2017 in the Amphitheater.

“The conducting fellowship has been a wonderful arrangement,” said Timothy Muffitt, conductor and music director of the Music School Festival Orchestra. “We attract the very highest level of young conductors.”

Rebecca Tong, the 2017 David Effron Conducting Fellow, will make her Chautauqua Institution debut at 8:15 p.m. Monday in the Amphitheater. She will lead the MSFO in its opening piece, Antonín Dvořák’s Carnival Overture.

Tong found her way to conducting when she realized early on in her music career that she enjoyed working with people. She said she’d get lonely spending hours by herself in a practice room, but as a conductor, she’s able to combine her passion for music with her people skills. Through conducting, Tong is able to work with musicians and spread her love for music with the general public.

“How do you inspire people through music … even (if) they’re not musicians?” Tong said. “That’s one of the biggest reasons why I wanted to be a conductor.”

The performance the audience will hear tonight is what Tong calls the “top of the pyramid.” The stage-ready performance rests upon bottom layers of “blood, sweat and tears.” But conductors start building the pyramid long before the orchestra begins rehearsing.

Tong said most conductors will spend months preparing for a big piece, like the Erich Wolfgang Korngold piece Muffitt will lead the MSFO in at Monday’s concert. Tong began studying the Dvořák at the end of May.

“It’s a big challenge for a conductor because we need to interpret as much as we can from the composer’s intent,” Tong said. “It’s a big responsibility to take what the composer is telling us and have to rehearse the orchestra. … Musical depth is very important to being a conductor.”

Following the Dvořák, Muffitt will lead the MSFO in Ottorino Respighi’s Fountains of Rome. The major work in Monday’s program is Korngold’s Symphony in F-sharp major.

Although Muffitt said it’s a “real tour de force for the orchestra,” the young musicians are up for the challenge.

“It’s a little daunting for me as well as the rest of the orchestra,” said Tobias Roth, Monday’s principal violist. “But we’re going to rise to the occasion. Everyone has been taking it very seriously.”

The Korngold isn’t just a challenge for the orchestra. According to Roth, the symphony isn’t a work audiences instantly find beautiful. As opposed to the Dvořák, which is “light, kind of like an appetizer,” Roth said the Korngold piece needs to be heard a few times to be fully understood.

Korngold came to the United States in 1934, emigrating from Austria to flee the Nazis. Muffitt said Korngold’s “musical language lent itself so perfectly to films,” and Korngold even won the 1939 Academy Award for best original music score for “The Adventures of Robin Hood.”

Yet, Muffitt said, Korngold wrote film music “just to pay the bills,” and considered himself a concert composer.

“Anyone hearing this symphony will say this sounds like film music,” Muffitt said. “But the reality is that film music sounds like the symphony.”

Sangram Majumdar will paint a room of his own in lecture