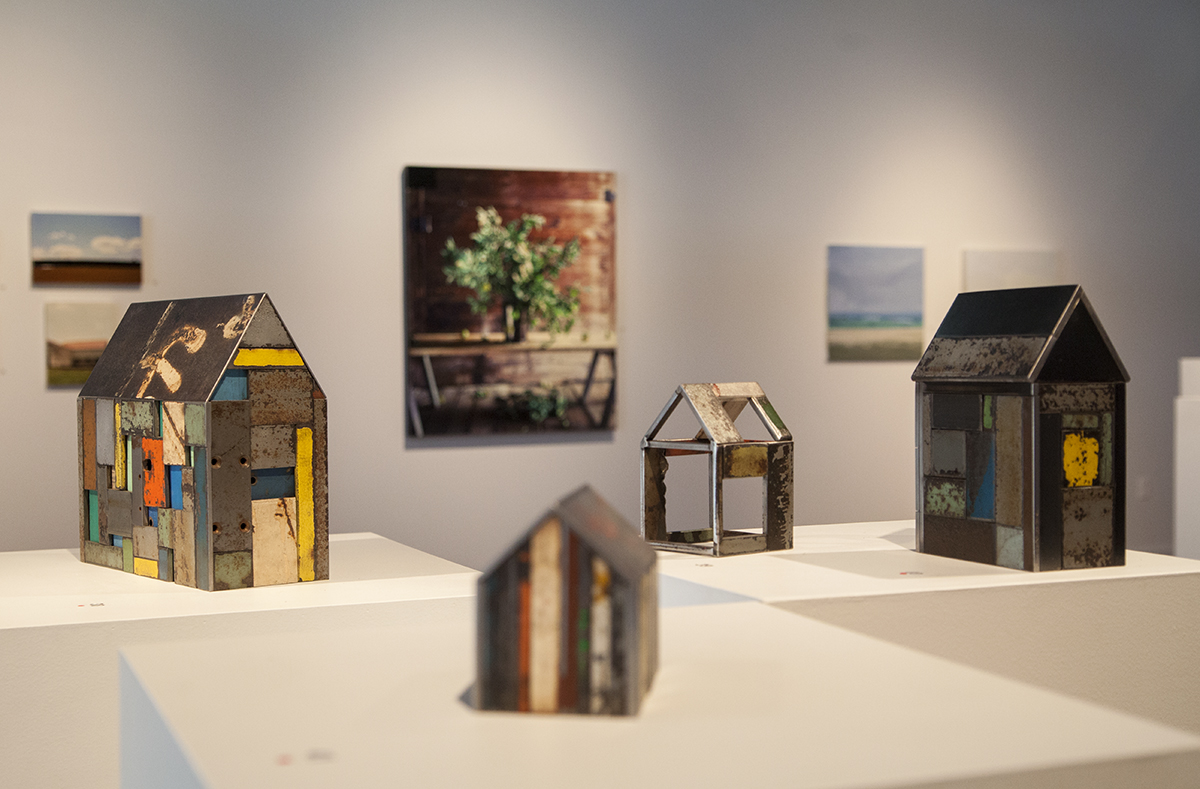 When Thomas Paquette was growing up, his family would leave their home state of Minnesota every summer and drive, spending a month or two camping around the country. He loved seeing how “amazingly different” parts of the country were.

“I love anything to do with nature,” he said. “I’ve always been fascinated by the landscape.”

Now Paquette, a self-described geophile, is a landscape painter based in Warren, Pennsylvania.

Several of his paintings, some oil and some gouache, are in the Visual Arts at Chautauqua Institution show “Resting Place: The American Landscape.” “Resting Place,” which opened June 25 in the main gallery of Strohl Art Center and runs through July 16, incorporates the work of six artists — whose mediums include oil, acrylic, watercolor, photography, steel structures — but all share an admiration of what nature offers.

“The world gives up so much and it gives us so much to look at,” Paquette said.

Since completing graduate school, Paquette estimates that he’s completed 1,500 paintings. Given the sheer number of works he’s completed, it’s surprising that Paquette wasn’t always going to be a painter.

“There was a time when it just seemed like a ridiculous thing to go into as a profession,” he said.

He studied for a few years to be a naturalist, but eventually returned to art.

“I decided the best thing that I could do, really, to inspire people about loving and taking care of the environment, is to paint it,” he said.

Like Paquette, painter Nicole Renee Ryan, whose watercolors and oils are also on display in “Resting Place,” was directed away from pursuing art as a career, even though it was what she’d always wanted to do.

“It’s just one of those things — people talk you out of it,” she said. “And for very good reason; it is very difficult to make a living doing it.”

Ryan didn’t go to art school; instead, she earned a bachelor’s degree in psychology. She worked in that field until she and her husband moved. Struggling to find a new job, she finally gave herself the chance to pursue art by planning a yearlong “sabbatical.” After a year, things were going well enough that she gave herself another year, and another year and another.

“Suddenly, it was my career,” she said. “And I was really happy.”

She’s now been a full-time artist for about six years. She did portraits until about four years ago, when an idea struck her.

It was early in the morning and Ryan was on her way to the gym, a place out in the country on top of a hill that often displayed spectacular sunrises. That morning, though, it was a simple blue sky full of clouds that Ryan found herself admiring.

“I don’t know why it felt so special, but it felt like something I needed to capture,” she said.

She expected her inspiration to carry her through one piece, but she ended up doing at least a hundred landscapes.

“I’ll keep doing it until there’s nothing left to explore,” she said.

Ryan’s exploration of landscapes is limited only by her imagination, as she creates paintings from memories of places and from her own mind, eschewing photographs or other references to guide her.

“I really like to toe this line between abstract and reality,” she said. “The trick with landscapes, really, is just (that) if there’s a horizon line, people will read it as a landscape. So I can actually push it quite a bit and have it still be readable as a landscape.”

Judy Barie, the Susan and Jack Turben Director of Galleries, who selected the works appearing in “Resting Place,” appreciates Ryan’s work for its “abstract twist on a classic landscape.”

That said, Barie specifically chose to do a landscape show to avoid too much abstraction, as the next show to appear in the main gallery of Strohl, “Conversations in Red,” will be entirely abstract works. Barie prefers to organize a variety of exhibitions each summer, and even within each show, strives for a mix of mediums represented. She appreciated, for example, that Gavin Benjamin’s photography series brought a medium other than painting into the “Resting Place” show.

“I love the story that his pieces tell,” she said.

Benjamin said his photo series offers a peek into a day in the life on a Pennsylvania farm — one farm in particular. He usually makes several visits to his best friend’s farm in Chester County, Pennsylvania, every year.

“It’s one of my favorite places to be,” he said.

The photographs are collaged together with some shapes or lines protruding.

The layering concept is one that Benjamin, a fan of Henri Matisse and decoupage, has used for some time, but he thinks it can only be fully appreciated when seen in person.

Incorporating those small additions not only gives the photos a slight three-dimensional aspect, but also makes them a “little more playful,” Benjamin said.

This is Benjamin’s first time showing work at VACI. He attended the exhibition’s opening reception on June 28, which he said was “fantastic.”

“Judy Barie was an amazing curator. She really helped me to push this series,” Benjamin said. “I want to say thank you.”

Finally, to round out all of the two-dimensional art in the show, which also includes paintings by Peter Hoffer and Sara MacCulloch, Barie wanted something to fill the space in the center of the gallery.

“We really needed something in the middle to ground it,” she said.

She was initially thinking of birds for the middle of the room, but couldn’t find any she liked. Then, in November, Barie visited the Ann Nathan Gallery in Chicago, where she saw small house-shaped sculptures made by Jim Rose, an artist whose steel furniture was built in the Shaker style VACI has displayed in the past.

“I turned a corner and there were these houses,” Barie said. “In my opinion, (they) pulled everything together.”

Rose, an artist from Wisconsin, estimates that he has made 46 of these small house and barn shapes. He said they offer a “fun diversion” from building furniture. He pulls the steel from scrap yards, where he finds odd items like snowblowers and other discarded machines, then chooses pieces he wants, cuts them to size and welds them together. All of the colors come from paint that was already on the metal; he just arranges the pieces into his own desired design.