She was reading about the growing split between the left and right in American politics, and said she realized some of the social and political changes she hoped for might not happen in her lifetime.

“I thought, ‘I’ve got to understand the opposition: People that are against the things that I think would be good,’ ” Hochschild said. “People have a different vision for this country, and I don’t get it.”

That search for understanding led her out of her office and into the community of Lake Charles, Louisiana. The result of her work is Strangers in Their Own Land: Anger and Mourning on the American Right, which is Week Three’s Chautauqua Literary and Scientific Circle selection. Hochschild will present her work at 3:30 p.m. Thursday in the Hall of Philosophy for Week Three’s CLSC Roundtable.

Hochschild said she wanted to find a “bubble” that was as far right as her life in Berkeley was left.

“I knew one person in Louisiana, and that was how it started,” Hochschild said.

Hochschild’s book details her process of understanding the right-leaning population of Lake Charles and its discontent with America’s political status quo.

Matt Ewalt, associate director of education and youth services, said Hochschild’s work in Strangers in Their Own Land taps into what President Michael E. Hill challenged Chautauquans to do at the beginning of the season: to engage with and listen to one another, and “commit ourselves to a muscular civil discourse.” Ewalt said what he most admired about Hochschild’s approach was her “act of truly listening to others.”

“It’s also very clear to me in reading the book that this is not a project initiated with a particular thesis or argument and then simply seeking evidence for it, but rather a journey of discovering what her fellow Americans feel about a number of issues and the challenges they’re facing,” Ewalt said. “And in doing so, she’s getting a much deeper understanding of those who are too often forgotten in the larger American conversation.”

Hochschild’s book is part of a large crop that sprung up last year as the presidential election drew near: books that potentially explain the growing division between the left and right ends of the political spectrum in America. Strangers in Their Own Land, Nancy Isenberg’s White Trash and J.D. Vance’s Hillbilly Elegy were all released within two months of each other, and each offers a different approach to understanding the divide.

Sherra Babcock, vice president and Emily and Richard Smucker Chair for Education, said she thought one of the books from that crop would be a good choice for the CLSC in terms of timeliness. She said Hochschild’s work felt substantive and well-researched, and she knew it was something Chautauquans would respond to.

“She admits her own biases in order to explain the respect and dignity she found in the people who thought in a completely different way from her,” Babcock said.

Babcock said she’s since recommended Hochschild’s book to many people both inside and outside Chautauqua, and she’s been impressed with the response from people of all kinds of different political leanings.

Hochschild said turning to literature to help navigate the divided political climate is “a healthy impulse,” and that the wealth of books about understanding the right makes sense.

“Before we do anything, we have to understand it,” Hochschild said. “And I think there are a bunch of us who in our own different ways are trying to do that.”

Times of political turmoil cause people to retreat into their “bubbles” and feel nervous, Hochschild said, and it makes them question the very nature of their country.

“Bubbles are not just geographic enclaves,” Hochschild said. “Within each enclave is a notion of the truth. It’s scary. People are feeling isolated and fragmented, and that’s why they’re reading these books.”

The idea of the “bubble” also ties into the broader idea of community, a concept Hochschild said is “double-edged.” A community can offer a system of support, but it can also “lock us into our perspectives and harden distrust of the ‘other,’ ” she said.

“We need it, and it supports us, but one unintended consequence of community is that when we turn to it, we can turn our backs on others outside of our community,” Hochschild said.

One way of understanding the political divide is to foster a sense of empathy, which Hochschild said “gets us to the beginning of a long process.”

Hochschild makes empathy central to her approach in Strangers in Their Own Land, using the term “empathy wall” to describe her methodology. 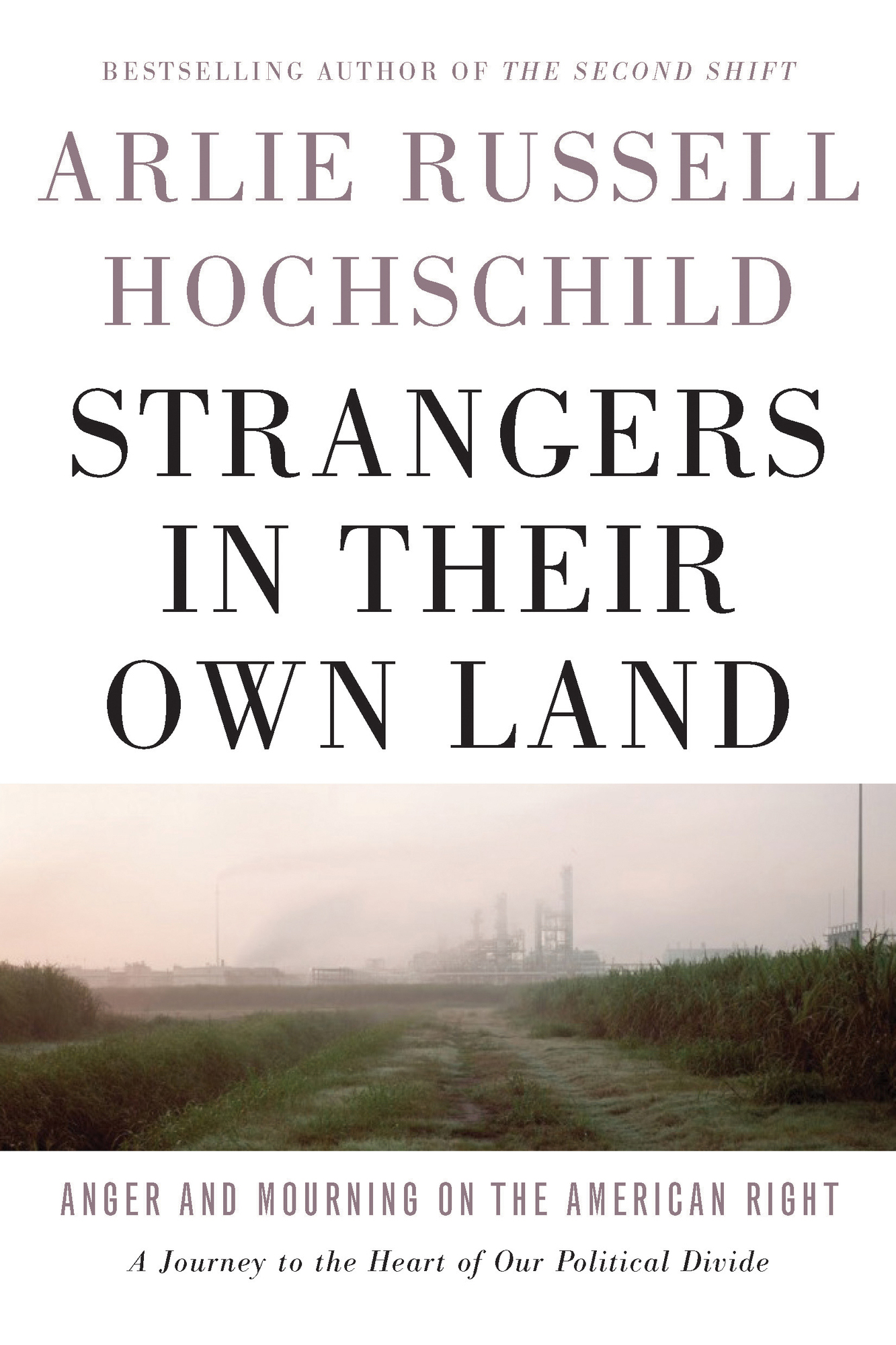 “An empathy wall is an obstacle to deep understanding of another person, one that can make us feel indifferent or even hostile to those who hold different beliefs or whose childhood is rooted in different circumstances,” Hochschild wrote in Strangers in Their Own Land.

For Hochschild, she wanted to get over to the other side and understand how those on the right saw the world. She said she sometimes felt like she was “sliding back down” to her side of the wall, but that what impressed her was the openness of the people she talked to for the book.

“What I really felt was that among the people I got to know, however strongly they felt about and held their own views, they were trying to help me,” Hochschild said.

Their openness went beyond mere Southern hospitality, Hochschild said, because they joined her in the effort “to bridge this gap.”

A conversation with one man stuck with her, she said. He told Hochschild that they had “similar hearts and similar heads,” but “different souls.”

“And I thought, that’s a great way to put this,” Hochschild said. “Then I said to him, ‘OK. Will you be a co-detective with me in the sociology of the soul?’ And he said, ‘Well, I’m not sure what that means, but yeah.’ ”

Hochschild said she was “thrilled” by his reaction because it speaks to the larger insight she acquired while writing the book. She said people should accept the idea that there are deep ideological differences between groups because “that’s who we are in America.”

It’s hard and perhaps unrealistic to meet in the middle, Hochschild said, but that doesn’t mean people shouldn’t try.

“You can be who you are and believe what you do on a bunch of issues, and come together to define common ground,” Hochschild said. “I found a lot of that.”

There were a few issues that many people seemed to agree on, Hochschild said, regardless of their political party: getting money out of politics, clean air and water, renewable energy, reducing prison populations. These commonalities are opportunities for people to understand each other and work toward a shared goal.

“You would run into snags if you were the negotiator getting everybody’s signature on paper, but there’s a lot of potential for coalition building around particular issues,” Hochschild said.

Since the release of her book, Hochschild said a lot of people have come to her and asked if she can put them in touch with the community of Lake Charles. She said this shows that people from different sides of the political divide want to make connections.

“There’s a lot of goodwill that doesn’t have a place to go,” Hochschild said. “There is now a movement — and I consider myself a part of it — to find common ground in this divided America.”

One example of this movement, Hochschild said, is Bridge Alliance, an organization committed to fostering open conversation between both sides of the political spectrum. Hochschild said she and one of her subjects from Strangers in Their Own Land did an event with the organization, an experience she enjoyed.

“As the country becomes yet more divided, with a media that is increasing the divide and a divisive president — there is a movement afoot to push the other way, which I think is great,” Hochschild said.

People must find that common ground and harness their goodwill in order for the country to move forward, Hochschild said. She said she’d like for readers to think about that after finishing Strangers in Their Own Land.

“I hope they feel hopeful,” Hochschild said. “I hope they come to imagine those on the ‘other side’ as people they can talk to about the differences they have. And that people not just give up. I’d like to see people try to heal this divide.”

Hochschild said it’s easy to be worried about that divide, especially because people tend to hear about the bad in the world more than the good. But the “nascent movement of people of goodwill” has her excited for the future.

“We all need to learn the human skills of the mediator: a person that can hold onto their own values, but reach out and find common ground,” Hochschild said.