Wayne A. Gnatuk donates history of Chautauqua in postcards, letters and stamps 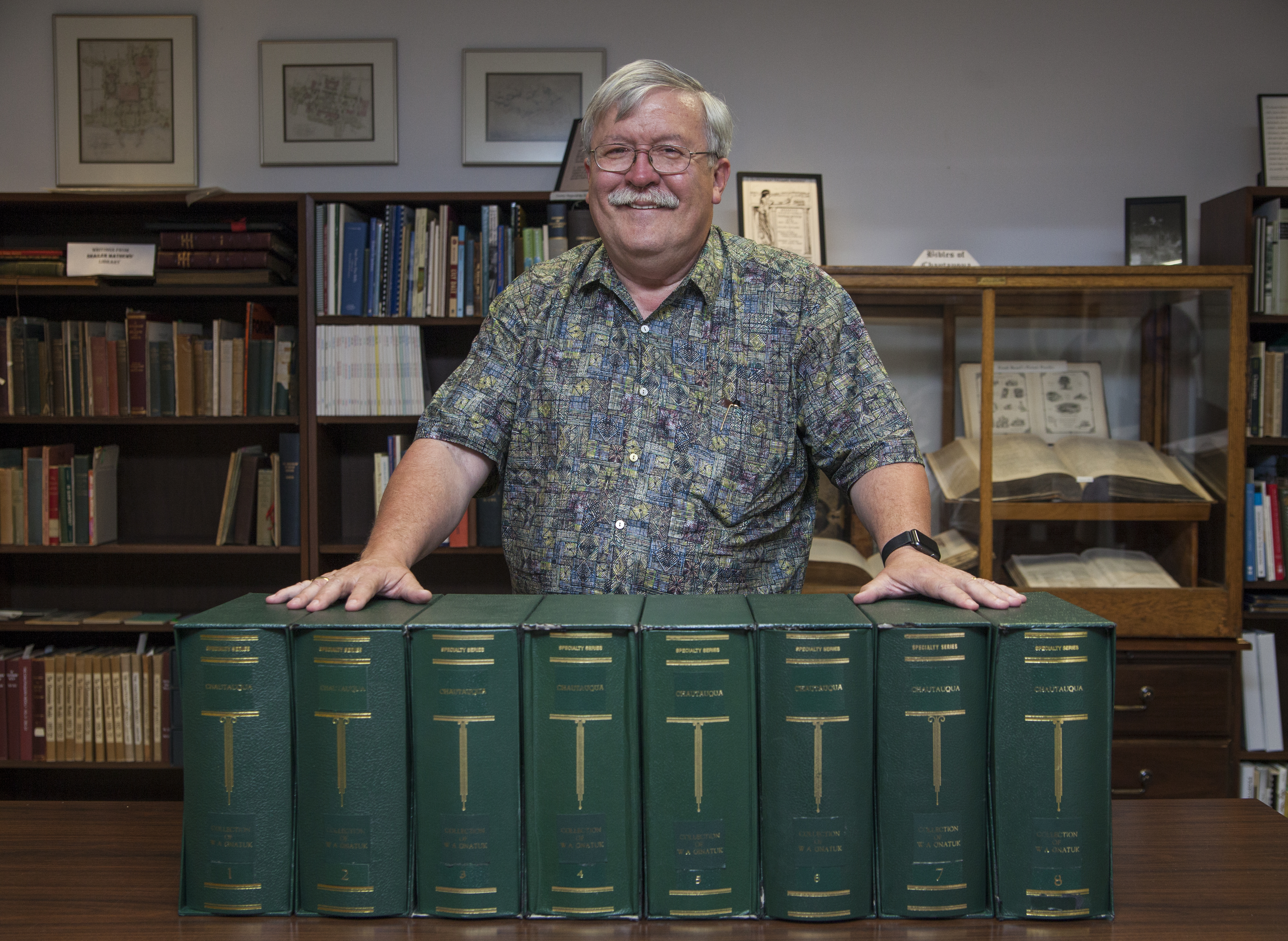 Wayne A. Gnatuk donated around 1,200 Chautauqua themed postcards on Thursday, July 6, 2017. Gnatuk has been collecting stamps and postcards since he was 5 years old. ERIN CLARK / STAFF PHOTOGRAPHER

He first came to Chautauqua Institution from Pittsburgh with his family in 1954 at the age of 3, and he has returned each summer ever since. He started collecting stamps at 5 and, by the time he was a Cub Scout, he had assembled his first complete volume of stamps.

Gnatuk’s love of Chautauqua and passion for stamp collecting dovetailed into a lifelong pursuit that he estimates took up about 7,000 hours of his time. Last week, he donated the fruits of that work — a treasure trove of stamps, letters and postcards, all with a Chautauqua theme — to the Institution’s Oliver Archives Center.

The collection features eight bound volumes of materials. The first volume holds hundreds of Chautauqua-related stamps and original letters from Chautauqua written by luminaries like John Heyl Vincent, the co-founder of Chautauqua with Lewis Vincent, and Alf Landon, the governor of Kansas who was the 1936 Republican presidential nominee against Franklin D. Roosevelt. Among the stamps are first-day covers of the United States Postal Service’s stamp commemorating the 1974 centennial of Chautauqua’s founding. It depicts a large assembly tent on the grounds, circa 1874. Gnatuk bought the canceled stamp at the time of its issue and went on to track down 60 more of them, all of which are included in his collection.

Volumes 2 through 8 contain more than 1,100 picture postcards of Chautauqua, categorized by subject matter and postmark and mounted in special philatelic sleeves, with accompanying scanned images of the backs of the postcards. Like the proverbial journey of a thousand miles that begins with one step, the collection began with one postcard. 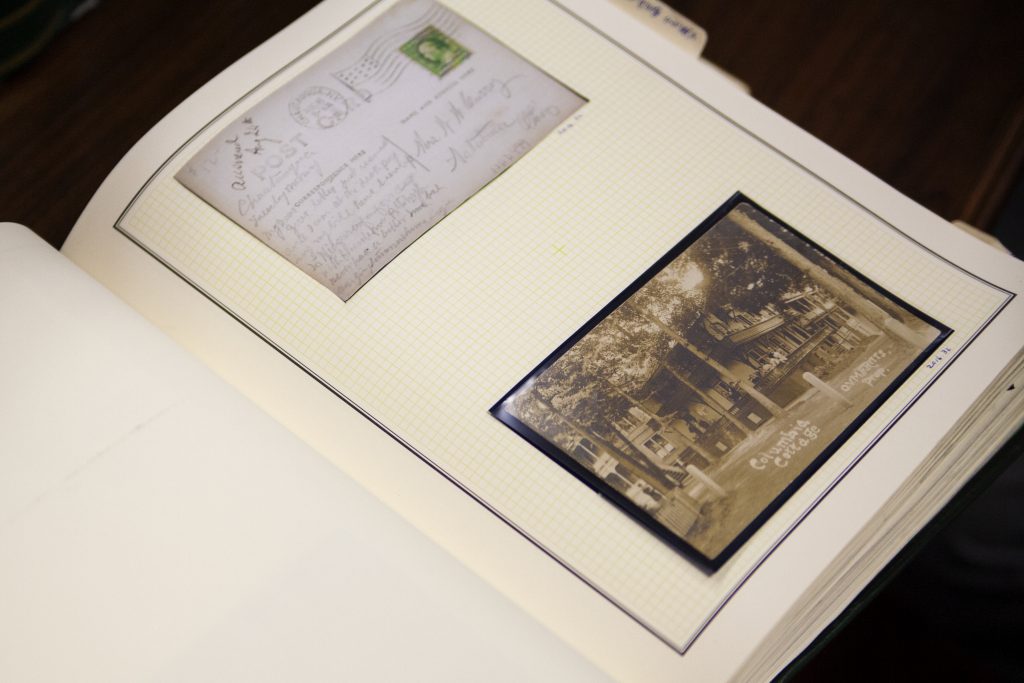 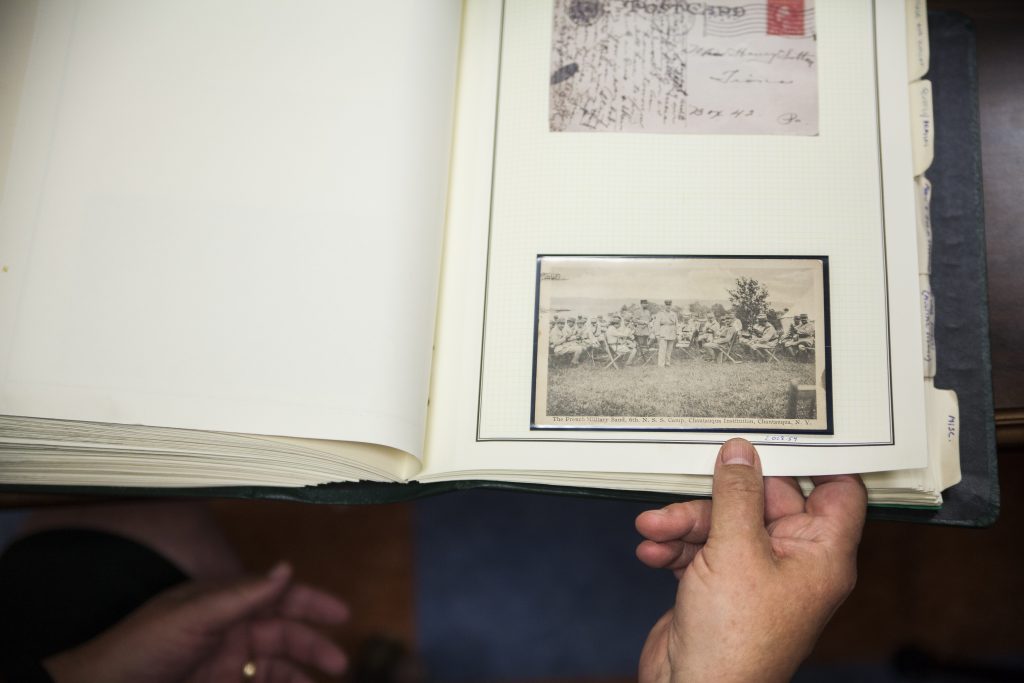 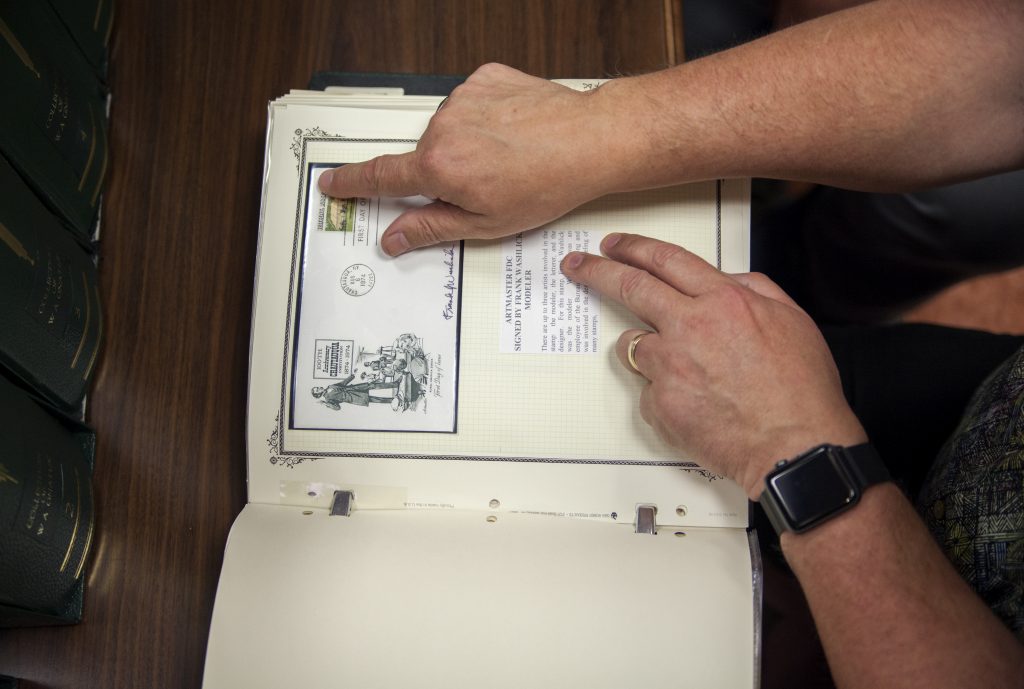 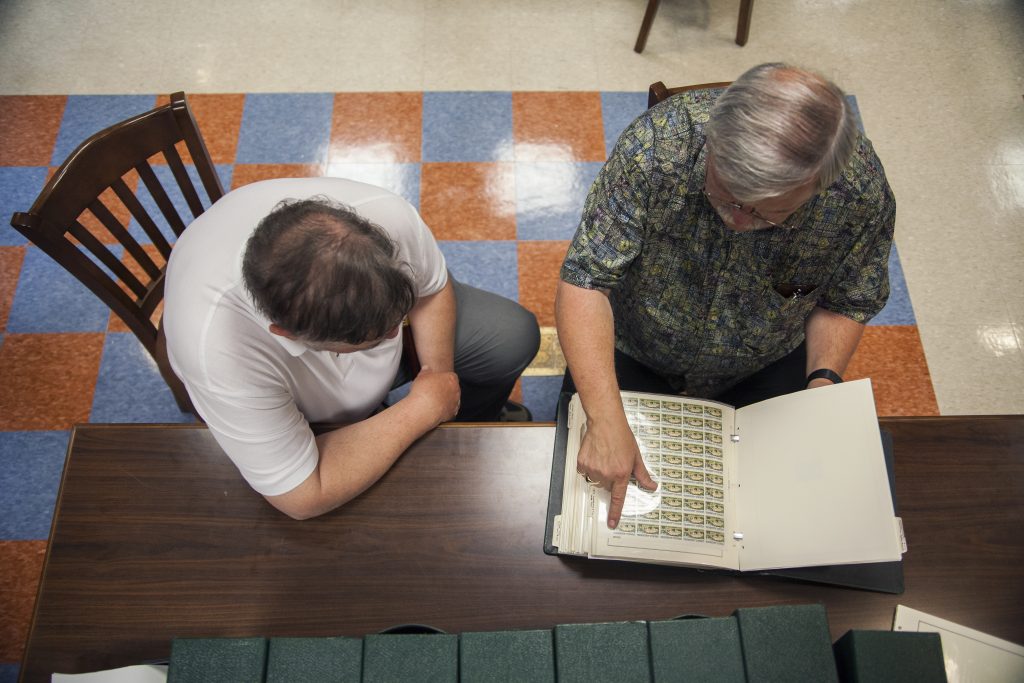 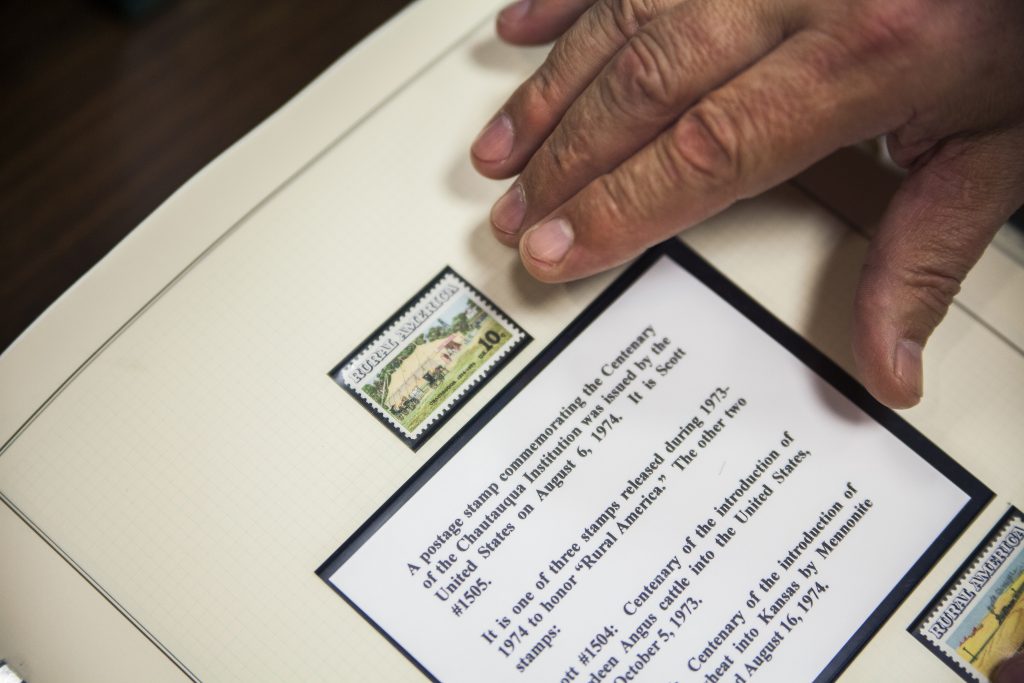 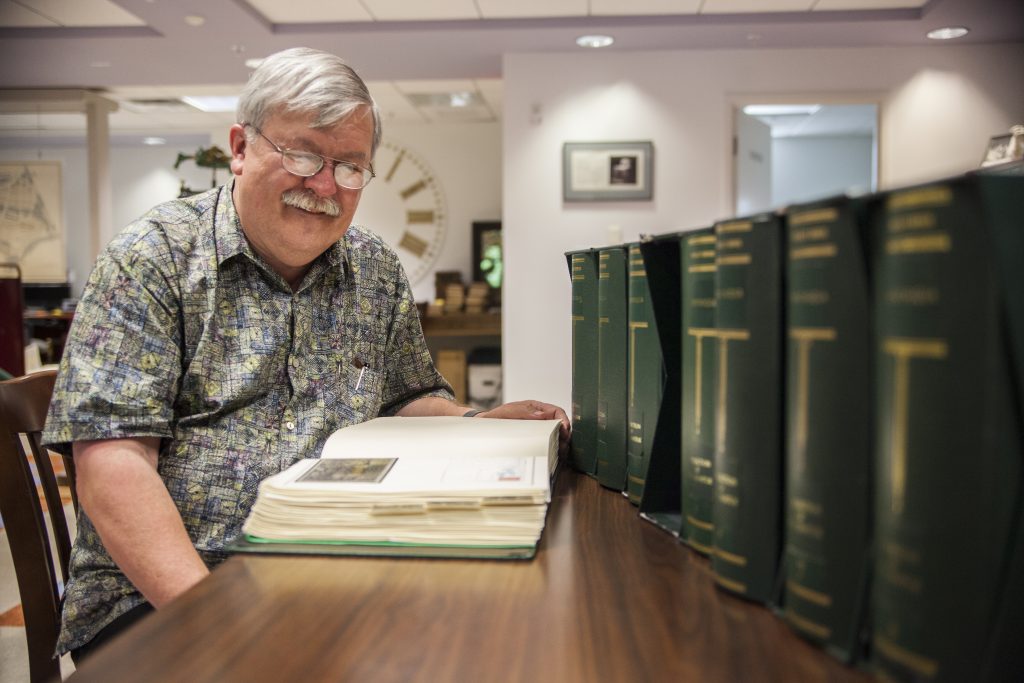 “In the 1980s, I was going through a box of stuff and found a postcard from 1916 of the Miller Bell Tower,” Gnatuk said. “I paid a buck for it. Over the years, I began acquiring more, and in the mid-1990s, I thought it would be kind of fun to collect a postal history. eBay was brand new, and I started aggressively finding and buying old postcards. I probably checked eBay twice a day.”

A Presbyterian minister, like his father, Gnatuk said his work required him to “be an extrovert because of my ministry, but I was an introvert at home, and I really became involved in collecting.”

The picture postcards range from the advent of their invention around 1890 up to 1951, the year Gnatuk was born. They include images of the Colonnade, the Amphitheater, the Athenaeum Hotel, the old Pier Building and many other quintessential Chautauqua scenes.

“It’s fascinating to see the history of Chautauqua through the changes in the buildings and people’s clothing over the years,” he said. “The fountain that is in front of the post office now was once in front of Norton Hall. You can really follow the changes.”

Last year, Gnatuk approached Jon Schmitz, Chautauqua’s archivist and historian, about donating the collection. He said he believed it was important to keep the collection together and to make it available for future generations of Chautauquans.

“We already had postcards, but this collection was so well organized and housed that it is an invaluable addition to our holdings,” Schmitz said. “And it is also a wide collection of historical materials that have been impeccably kept.”

Schmitz said he hopes to create a display at the Archives soon. 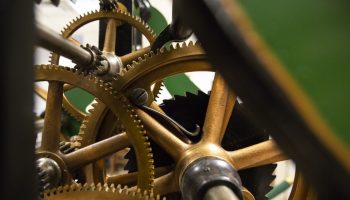