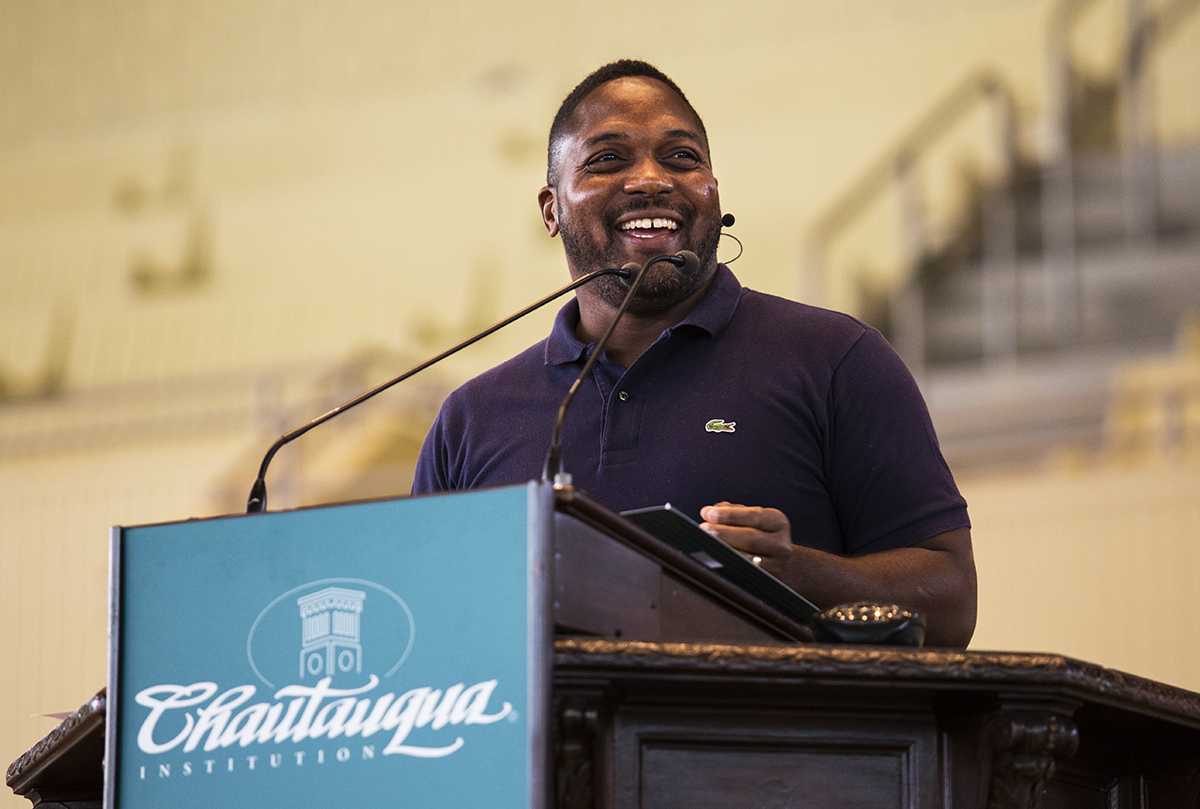 This has been an emotional few days for Bryant Terry.

“The brilliant comedian, civil rights activist and social critic Dick Gregory passed away about a week ago,” Terry explained.

Called the “Jackie Robinson of comedy” for his breaking of stand-up’s color barrier, Gregory was an icon of both humor and social justice.

But for Terry — a 2015 James Beard Foundation Leadership Award-winning chef and author of 2014’s Afro-Vegan — Gregory represented something more personal.

“Gregory was a major advocate for healthy eating,” Terry said. And despite his own weight struggles, “he was not only committed to improving his own personal health but also (was) … especially focused on improving the health and well-being of the African-American community.”

Speaking Friday in the Amphitheater for the final morning lecture of both Week Nine, “At the Table: Our Changing Relationship with Food,” and the 2017 Chautauqua season, Terry explored his own engagement with such advocacy.

After a moment of silence for Gregory, Terry explained his own start on that path.

“On (a recent family) trip, my precocious 6-year-old had a lot of questions about ‘What was Daddy like when he was my age,’ ” Terry said. “So we spent a lot of time reminiscing on my childhood, and, of course, lots of those memories were about food.”

Spending time in the kitchen with his grandmother, learning how to cook, was a particularly formative tradition. And when it happened, everyone in the house would know.

“Love and connection and spirit were additional ingredients” in the food she made, he added. And that emotion came through in the food.

It is that emotional connection, Terry said, that makes food so powerful. Through it, food can create moments of intense transformation in those sitting around the table.

“Moments like these have power,” Terry said. “Understanding that, my guiding principle for the 16 years that I’ve been working to bring a healthy, just and sustainable food system has been this simple phrase: ‘Start with the visceral to ignite the cerebral and end with the political.’ ”

He repeated it: “Start with the visceral to ignite the cerebral and end with the political.”

Terry has been happy to see the food movement gain traction over time, but he’s also been disappointed with the emphasis on individual consumer choice over large-scale social and political activism.

That, he clarified, is what differentiates the food justice movement, which emphasizes addressing structural and systemic inequality in the food system that predominantly affects low-income, urban people of color.

“Many historically marginalized communities have been systematically deprived of access to healthy, fresh and sustainable food, and in many of those communities, which are often described as food deserts, fast food is more common than fresh food,” Terry said.

In Terry’s home community, for instance, this disparity is clear. Within a few minutes of his Oakland, California, house is an independent grocer, a Whole Foods and a thriving farmers market. And yet a mile to the west, in the predominantly African-American neighborhood of West Oakland, there are 58 corner and liquor stores but not a single grocery.

“Imagine being a young person, imagine being an older person who has no reliable transportation,” Terry said. “Imagine being a single mom with two kids who didn’t have a meal for them. You have to go to the more affluent parts of Oakland or (other nearby neighborhoods) to have your food needs met.”

Resolving this inequality is what food justice is all about.

Of course, supermarkets aren’t the only contributors to food security and insecurity, and food deserts aren’t phenomena restricted to urban areas — poor white communities in Appalachia, for instance, face this crisis, too.

But Terry’s work in particular focuses on the race and class systems that underlie food justice in cities, and on helping those marginalized communities most impacted.

“The work of highlighting these issues and using my position to shift resources and help support folks living in these communities is important,” Terry said, “but I think that it’s also important to know that one of the cornerstones of food justice is that it moves beyond advocacy and direct service, and calls for organized responses that are owned and driven by those most impacted by the issues of food insecurity.”

Many historically marginalized communities have been systematically deprived of access to healthy, fresh and sustainable food, and in many of those communities, which are often described as food deserts, fast food is more common than fresh food,” Terry said.

His participation in this fight has been a long time coming. It started when he was a 10th-grader; the year was 1992.

“My best friend … came to my house, and this is where everything changed and I shifted into the fierce food activist that I am today,” Terry said. “He brought over this tape.”

It was a song: “Beef,” by KRS-One. Terry recited its opening bars.

“Beef, what a relief,

When will this poisonous product cease?”

The song had a powerful impact on him. It, combined with Upton Sinclair’s The Jungle, set him on course for a lifetime of food activism. The groundwork for his mantra — the visceral, the cerebral, the political — had been set.

His ideological evolution continued. In high school, he was an “on-a-soapbox, finger-wagging, ‘damn you to hell’ vegan.” He read lots of health and food books, but all were by white authors.

It wasn’t until college that Terry discovered Dick Gregory’s Natural Diet for Folks who Eat: Cookin’ with Mother Nature!, and its impact on his worldview was profound.

“Seeing someone who looked like me and knowing that I could be a public figure who was active in these issues, who was inspiring people, really took my advocacy to a next level, and it moved me beyond just thinking about making personal changes and understanding the role that I play in community change,” Terry said.

Then, a few years later, another transformative moment. It was a morning in 1999, and Terry was riding the subway to a class he was TA’ing.

“I see these kids on the train, 7 a.m. in the morning, drinking sodas, eating candy bars, potato chips, and I knew that this was their breakfast,” Terry said.

He happened to be studying the social movements of the ’60s at the time, and the Free Breakfast for School Children Program that the Black Panthers had run in cities across the nation struck him as relevant.

“Within one year, they were feeding over 10,000 children every single morning,” Terry said.

As he became more and more involved with food justice, Terry noticed something: The people who were most affected by these issues — the poor and the disenfranchised — were not playing a role in organizing the movement itself.

Terry set out to change this, creating a youth outreach program that would use food as a means of engaging young people in issues of food justice.

People doubted him, but the initiative proved a success.

“We saw kids raising their … food IQs, teaching them how to select and prep food,” Terry recalled. “We saw these kids taking control of their dietary destiny, we saw families and communities coming together around food, and we saw people making the connection between food, health and self-empowerment.”

“We saw communities of people who thought they had no power to learn,” he added. “But they had immense power.”

Terry also created a web series called “Urban Organic” as a platform to address both problems and solutions of urban food scarcity. He played the first episode, focused on an Oakland-area community farm, for the audience.

Through this and other platforms, like his role as chef-in-residence at San Francisco’s Museum of the African Diaspora, Terry has continued his food justice advocacy and grassroots community engagement.

At the same time, he cautioned against overemphasizing food justice on its own, removed from the context of larger inequality.

And it is on people of privilege — the people of Chautauqua, that is to say — to work to change this. At an institutional level, “the American project” is responsible for these conditions, and systemic policy change is the way they’ll be solved.

“It’s easy to blame the victim,” Terry said. “You know, in several ways it’s easy to say that someone who’s unhealthy or dealing with health issues, (that) if they just decided to eat more healthfully then they wouldn’t be dealing with these issues. Well, if you don’t have access, if there are structural realities they’re dealing with where they don’t even have the ability to access healthy foods, then how can we say that they’re at fault?”

Instead, through the three C’s of change — consumer change, community change, civic change — the personal can be connected to the political, and food justice can be fully realized.

In the end, Terry left his audience with a quote from the man who inspired him: Dick Gregory.

“Never accept injustice,” he urged, “wherever it may be.”