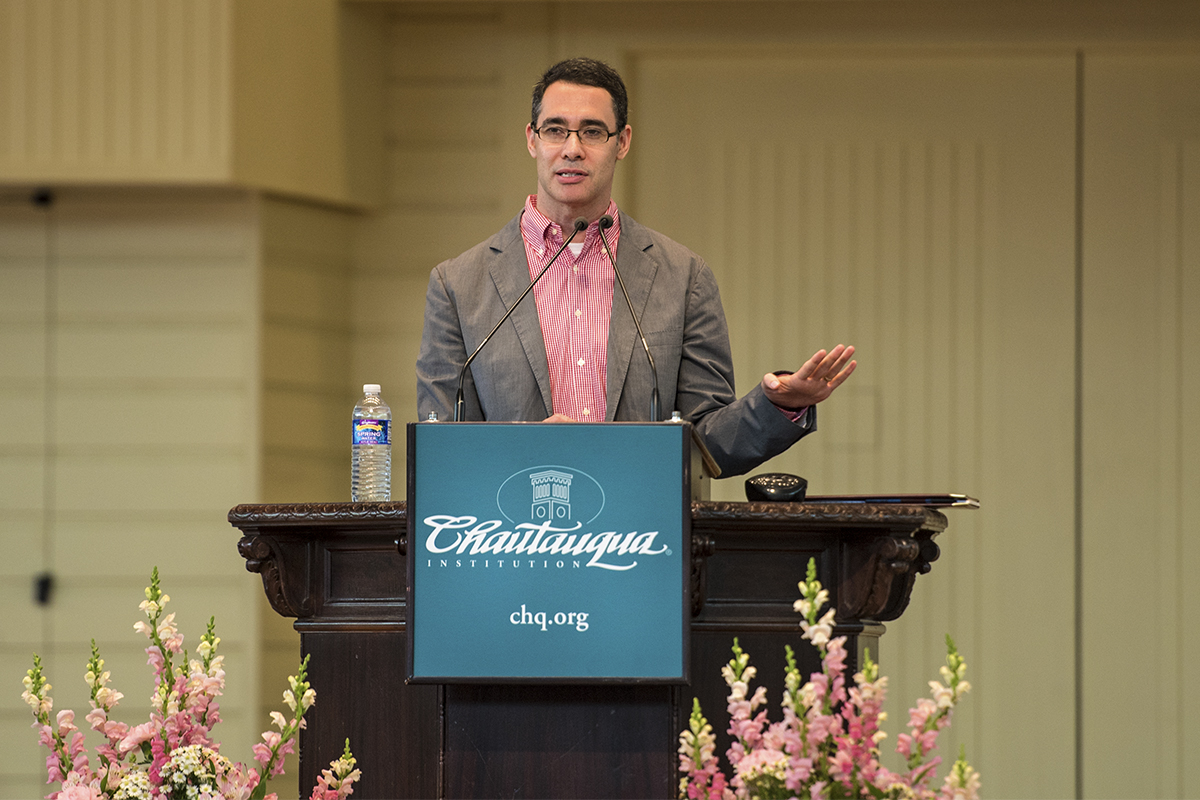 Adam Lowenstein, professor of English and film studies at the University of Pittsburgh, speaks on the importance of the horror movie genre Thursday, Aug. 10 in the Amphitheater. Lowenstein noted parallels between 1968’s “Night of the Living Dead” and 2017’s “Get Out.”

In following a former MI5 director general’s stark warnings of impending geopolitical catastrophe, horror movie buff Adam Lowenstein had his work cut out for him during his Thursday morning lecture.

“I feel like (Wednesday’s lecturer, Dame Stella Rimington) made my job much easier,” Lowenstein said, “because if you slept last night without nightmares after her talk, I can guarantee you sweet dreams.”

But, as he would elucidate over the course of the lecture to follow, perhaps the on-screen terror he knows so well isn’t all that different than the real-world terror discussed by his predecessor.

The penultimate speaker of Week Seven, “The Nature of Fear,” Lowenstein worked to show his Amphitheater audience why the oft-derided film genre of horror “deserve(s) and demand(s) scholarly research.”

His thesis — that horror films have “something important to teach us … about particularly devastating moments in history” — has been key to his work as a professor of English and film studies at the University of Pittsburgh and the author of Shocking Representation: Historical Trauma, National Cinema, and the Modern Horror Film.

“It is in the horror films, I argue, that audiences are challenged to feel the anguish attached to events such as the extermination of the Jews in the Holocaust, the bombing of England during the Blitz of World War II and the turmoil surrounding the Vietnam War,” Lowenstein said. “The horror films tell us that this anguish is alive, and relevant, to our present lives, rather than something we’ve gotten over.”

Exemplary of this allegorical significance is George Romero’s zombie classic “Night of the Living Dead” (1968), a Pittsburgh-set film “dedicated to an ideal of shared community spirit above all, and the terror we face when we lose sight of that spirit.”

Starring Duane Jones as Ben, a rare African-American lead given the era, the film follows his and six other characters’ plight as hordes of the ravenous undead trap their small collective within a country farmhouse.

“The strength, courage, intelligence and resolve displayed by Ben is something rare to find in lead film roles for blacks even today, never mind in 1968,” Lowenstein said. “Romero completed the film prior to the assassination of civil rights leader Martin Luther King Jr. in 1968, but ‘Night of the Living Dead’ did not reach audiences until after the assassination.”

“So Ben’s demise at the end of the film,” Lowenstein added, “when he’s shot by a posse of white militiamen who mistake him for a zombie inevitably evokes in viewers the often-violent resistance faced by the civil rights movement, including lynchings and, of course, assassination.”

This “truly shocking” end — and the sick irony of Ben dying at the hands of the living, not the living dead — serves as the “final blow in the film’s steady assault on our desires for reassurance that things are going to be okay.”

Romero presents a damaged and dangerous world, and through racialized metaphor, insists it is the same as that in which the viewer really lives.

Lowenstein actually spoke on this very topic years ago in Adam Simon’s “The American Nightmare” (2000), a documentary about horror films, from which Lowenstein played his audience a clip.

In it, Romero discusses why zombies, as “a blue-collar kind of monster,” serve as an apt proxy for humanity, and John Landis — director of “An American Werewolf in London” (1981) — notes the profound impact “Night of the Living Dead” had on him when he first saw it.

Saying that real-world images of racist white cops brutalizing nonviolent protesters were the “real horror images” of the ’60s, Romero notes the striking similarities between the racially charged ending of the film and the political reality of the era in which it was made.

“And yet,” Lowenstein said, “by 1970, George Romero was traveling from Pittsburgh to New York to host a screening of his film at one of America’s most prestigious temples of high culture: the Museum of Modern Art.”

Romero’s small, cheap indie film had been a breakaway success, not just by the standards of its genre but for cinema as a whole. Its legacy persists today, from direct sequels and spinoffs to stylistically and thematically informed offshoots like AMC’s “The Walking Dead” and Michael Jackson’s “Thriller” music video.

“What ‘Night’ accomplished so successfully that it can be considered a precedent for many films that followed was its melding of a popular genre — a marker of entertainment — onto a set of independent, anti-establishment aesthetics and politics — a marker of art,” Lowenstein said.

It is in the horror films, I argue, that audiences are challenged to feel the anguish attached to events such as the extermination of the Jews in the Holocaust, the bombing of England during the Blitz of World War II and the turmoil surrounding the Vietnam War,” Lowenstein said. “The horror films tell us that this anguish is alive, and relevant, to our present lives, rather than something we’ve gotten over.”

As the period from 1968 to 1970 bore witness to such tragedies as the My Lai Massacre, the Kent State shootings and the aforementioned assassination of Martin Luther King Jr., the film’s public perception went from sadistic to artistic.

“In this chaotic social climate,” Lowenstein said, “what once looked like pornographic violence in ‘Night’ now seemed closer to political commentary.”

It was in this context that Romero’s film “showed America to itself.”

By combining countercultural ideas about national politics, gory imagery evocative of Vietnam’s carnage and a matter-of-fact, down-to-earth setting and storyline, “Night of the Living Dead” carved out a unique place in pop culture as simultaneously critic and entertainer.

At the movie’s end, the harsh reality of all this terror, both on-screen and off, is driven home.

“None of the characters whose struggles we have just witnessed has survived to tell (their) tale,” Lowenstein said. “In this way, as in so many others, ‘Night of the Living Dead’ refuses to allow the daylight comforts of normality.”

“This may well be a nightmare from which we cannot awaken,” he added. “Or perhaps, no nightmare at all.”

But racism is as relevant a topic today as it was in the late ’60s, and as Jordan Peele’s recent “Get Out” (2017) reveals, horror movies remain an effective means of exploring those dynamics.

In “Get Out,” Daniel Kaluuya plays Chris, a young African-American man who travels with his white girlfriend to meet her parents out in the countryside.

Although he initially must deal with the discomforts of being one of the only black people in an overwhelmingly white community, the situation devolves even further into downright horror as it is revealed that “Chris is just the latest black victim to be auctioned off for a horrifying surgical transplant of old white brains into young black bodies.”

“The biracial comedian Jordan Peele’s directorial debut exudes the assured confidence of someone who not only knows the horror genre backwards and forwards, but who respects how the genre can, like comedy, put us in touch with uncomfortable social truths, even when — and especially when — the stakes are merely scares or laughs,” Lowenstein said.

Peele was influenced by a host of earlier horror films, including “Night of the Living Dead” itself, but most significant were “Rosemary’s Baby” and “The Stepford Wives,” both of which began as novels by Jewish-American novelist Ira Levin.

“The fact that ‘Get Out,’ a horror film focusing on African-American experience, would find so much inspiration in a Jewish author’s work is fascinating in its own right, and suggests that the horror genre may have some important things to teach us about how social minority positions have more in common than we might imagine,” Lowenstein said.

The paranoia of these story’s protagonists is not, then, merely paranoia; it is real, lived experience as a victim of majority prejudice. Only for those in a position of privilege are these plots pure fantasy.

This is not to say that the genre has remained unchanged since 1968, however.

“Where ‘Night of the Living Dead’ ends with what is to all intents and purposes the lynching of a black man,” Lowenstein said, “ ‘Get Out’ ends with a lynching avoided.”

Standing amid the dead bodies of the murderous racists he’s killed, Chris finds himself faced down by the lights of a police car. And though the audience knows he is innocent, an understanding of racial dynamics — the dynamics that have plagued Chris through the duration of the film — makes the scene appear to be Chris’ last.

“What Chris knows as well as we do is that the chances of a black man explaining the corpses that surround him as a sign of his innocence, rather than his guilt, are just about nil when faced by the white law and the white majority privilege of rational explanation versus minority paranoia,” Lowenstein said.

The reveal that it is an ally, not an enemy, within the car only stands to highlight the seeming un-imaginability of salvation when one is at the mercy of a prejudiced majority.

“But we need to imagine it,” Lowenstein said. “And one of the places we can go to imagine it is a place that may at first seem very unlikely indeed: the horror film.”