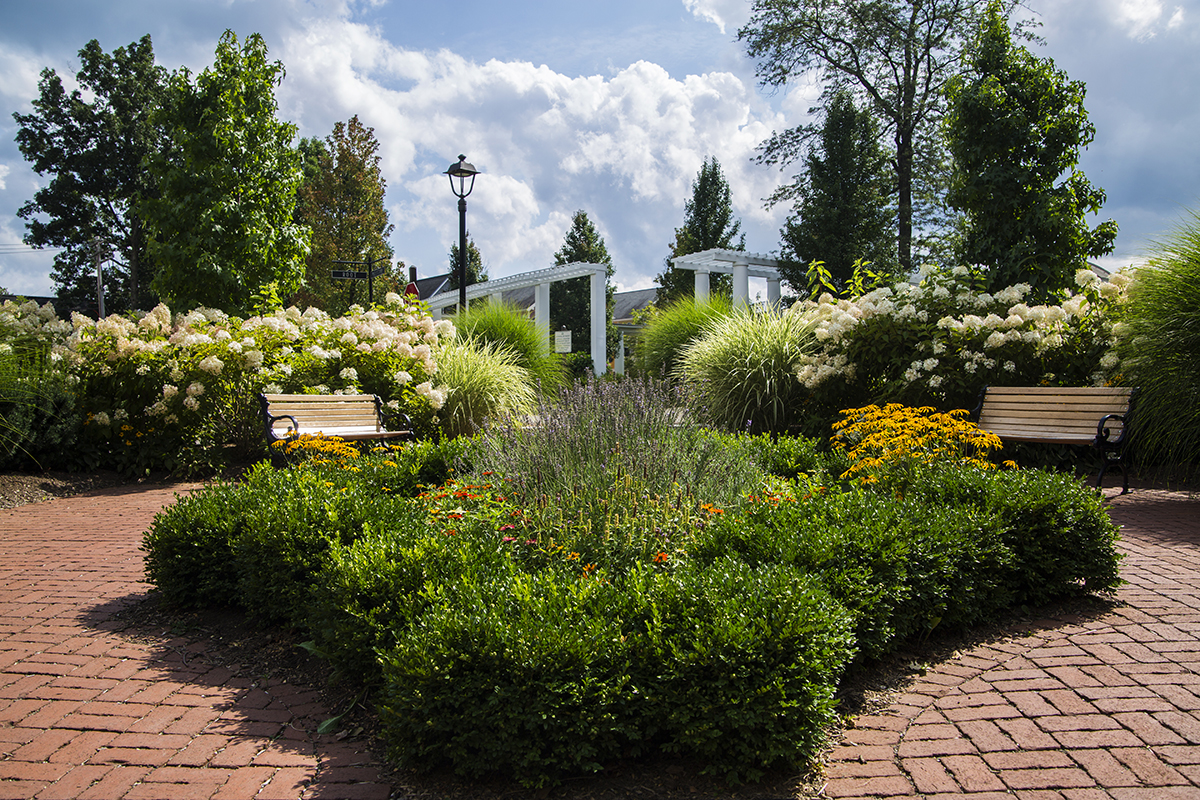 The Ryan Kiblin Memorial Stormwater Park is one of several rain gardens around the grounds created to prevent nutrient-filled runoff — with chemical pollutants like nitrogen and phosphorus — from reaching Chautauqua Lake. Such runoff contributes to the growth of algae and invasive vegetation. ERIN CLARK/ STAFF PHOTOGRAPHER

At Chautauqua, when it rains, it pours. And when it pours, rainwater picks up pollutants and flows into the lake.

Chautauqua Institution, though, has several safeguards in place that limit stormwater runoff with nutrients, such as phosphorus and nitrogen, that cause environmental and health problems in Chautauqua Lake.

“We’ve been identifying where the water flows, and we’ve been trying to figure out ways to slow it down and clean it before it gets into the lake,” said John Shedd, director of operations. “We’re trying to do this through natural means as much as possible.”

Among the Institution’s strategies in combating stormwater runoff are building rain gardens with absorbent native plants, regulating types of pavement and encouraging trees and long grass in residents’ yards.

These efforts are part of the Institution’s Stormwater Management Plan, initially funded by state grants but now largely through philanthropy, Shedd said. The plan breaks down the grounds into 13 drainage zones, or areas with different water flow patterns, and includes strategies for reducing nutrients and retaining water.

When nutrient-filled water flows into the lake, it can contribute to the growth of algae and invasive vegetation. Algae, in particular, poses problems to public health by producing harmful algal blooms.

Such blooms, which have appeared on the lake this summer, create toxins that are harmful to people who come into contact with them. Most recently, an “open water” bloom was confirmed on the lake on Aug. 7, according to the New York Department of Environmental Conservation.

One of the Institution’s main strategies for controlling stormwater runoff is through rain gardens and bioswales, both of which are areas with native plants that filter nutrients out of the water that flows through them.

“During a high storm event, you get such gullywashers down some of those roads,” said Betsy Burgeson, supervisor of gardens and landscapes. “You try to figure out where the hotspots are to alleviate those problems.”

Burgeson, who manages all of the plants on the Institution’s grounds, said her main goal is to stop water and divert it to rain gardens and other areas. The gardens have a variety of species of native plants.

“With the rain gardens we’ve put in, with the different plants we’ve tried out, they’ve done phenomenally,” she said. “It’s nice to be able to show people these plants are hardy.”

The gardens are designed to absorb nutrients such as phosphorus and nitrogen, which come from fertilizer and waste from people, according to the U.S. Environmental Protection Agency.

Other pollutants include sediment, bacteria, pesticides and various toxins, which can harm the lake’s ecosystem through “impacts on aquatic life, water chemistry, and physical conditions,” according to a 2013 report from the Institution on sustainability.

Most of the phosphorus that enters Chautauqua Lake’s north basin comes from groundwater, or water that seeps deep into the ground, according to a 2012 DEC report. More than 10,000 pounds of phosphorus enter the north half of the lake each year via groundwater, originating from developed and agricultural land.

The Institution also controls stormwater by regulating types of pavement on the grounds. Architectural and land use regulations require that residents have a limited ratio of “impervious” surfaces, or surfaces that don’t absorb water, Shedd said.

“That means pavement, or any solid surface, needs to be managed with the possibility of using a semi-pervious surface,” he said. “Homeowners are restricted on what they can do.”

The Institution aims to use more pervious and semi-pervious surfaces, which absorb and filter water. Sidewalks surrounding Fletcher Music Hall, for example, are made of bricks and rubber material that retain water.

Additionally, several areas on the grounds have “no mow zones,” where mowing is restricted to encourage longer grass that slows down water. The Institution also encourages planting trees to achieve that effect.

“Trees store hundreds of gallons of water a day,” Shedd said. “We plant as many as we can, especially near the shoreline.”

As part of its stormwater projects, Shedd said, the Institution will eventually compare nitrogen and phosphorus levels in the lake to initial measurements taken before the projects were started.

“We’re hoping to see a better impact on our shoreline area,” Shedd said. “But we also want to take that model project methodology and use it as a teaching device around the lake and even in other areas of the country.”