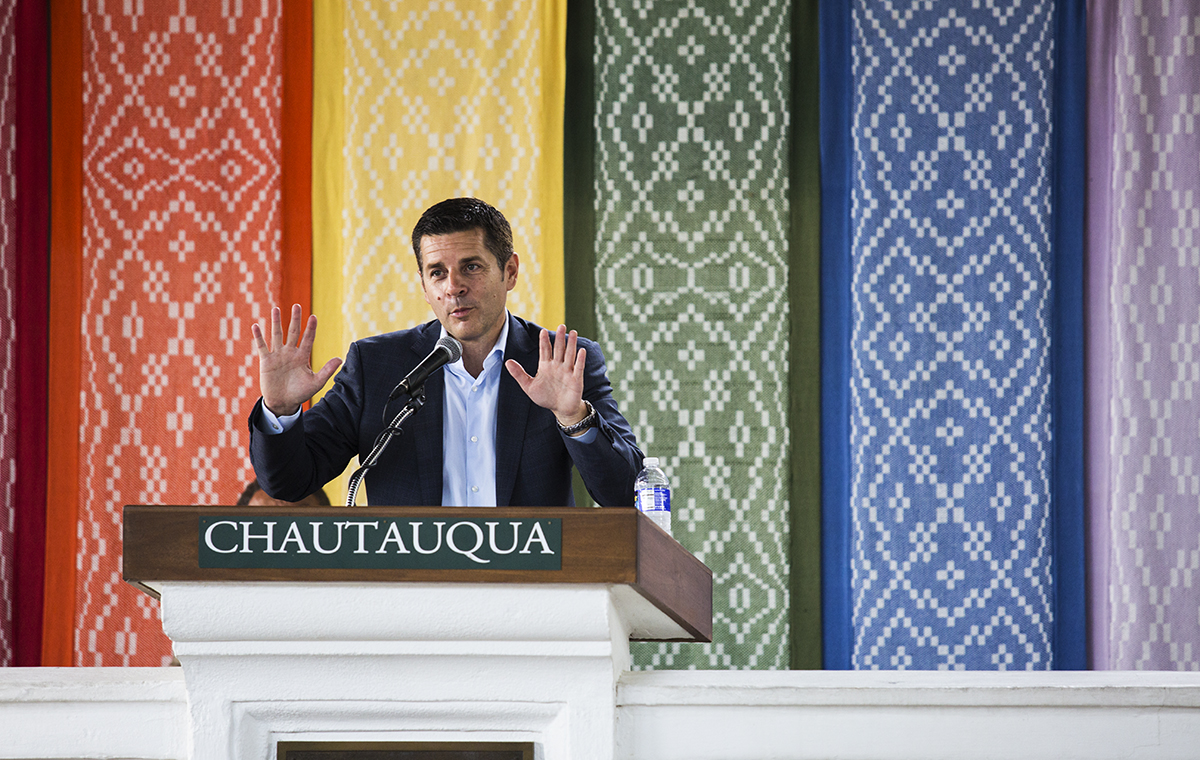 Dean Obeidallah speaks on “Can Comedy be a Form of Activism, or Are We Kidding Ourselves?” in the Hall of Philosophy on Wednesday, August 2, 2017. ERIN CLARK / STAFF PHOTOGRAPHY

In Arabic, “Insh’Allah” means “if God wills.” When comedian Dean Obeidallah was in a Jordanian restaurant, he asked an employee where the bathroom was. After pointing him in the right direction, the employee remarked, “Insh’Allah.”

“I’m like, what is happening in your bathroom that I need God’s protection?” Obeidallah joked.

This anecdote was one of many delivered by the host of Sirius XM’s “The Dean Obeidallah Show” in his lecture on “Can Comedy be a Form of Activism, or Are We Kidding Ourselves?,” the third in Week Six’s Interfaith Lecture Series, “The Spiritual Power of Humor,” Wednesday in the Hall of Philosophy.

“I believe in comedy,” Obeidallah said. “I think comedy might not change the world, but I think it can have a big impact.”

Obeidallah grew up with a Palestinian father and an Italian mother, and he polled the audience, asking if they could at least relate to his Italian heritage through visits to Olive Garden.

Obeidallah wasn’t always a comedian. Before his professional approach to humor, he was a practicing lawyer, and when he told his parents he wanted to take on stand-up, he joked, “they were really happy, as you can imagine.”

His first dive into the entertainment pool was at “Saturday Night Live” as a page, doing legal-related work for eight seasons. During his time off set, he realized the difficult elements of the comedic craft.

“To me, the best comedy entertains and it educates,” he said.

It was in SNL’s approach to 9/11 that Obeidallah experienced the most significant learning curve. Before the incident, he said, he was a white guy, whose friends had names like Monica, Chandler and Joey.

“It was after 9/11 as America changed, I changed,” Obeidallah said. “I didn’t expect to change. Frankly, I didn’t want to change. Being white is pretty good; there’s some benefits to it, I can tell you that. You know when you’re no longer white because I’m no longer white. I tell people this to put it succinctly: Sept. 10, 2001, I went to bed a white guy. Sept. 11, 2001, I woke up an Arab. I woke up a Muslim. I woke up an outsider in my own country.”

Before the attacks on the Twin Towers, Obeidallah would see a criminal on the news and thought, “I hope they catch the guy.” But in the aftermath, he would watch and think, “Please don’t let the person involved be Muslim.”

In these reactions, Obeidallah wondered if comedy could be used as a form of activism. Certainly, he said, it is common to share a video of Alec Baldwin as Donald Trump on social media — easier than sharing an academic piece.

The first part of activism, Obeidallah said, is awareness. And though Bill Cosby’s legacy has been tarnished, Obeidallah reminded the audience of a comment Katie Couric made: Muslims “needed their own ‘Cosby Show.’ ”

“If you don’t know us, you have no counternarrative,” he said. “There’s no one there to answer those questions. If you know a Muslim, it cuts through. Unless the Muslim you know is a real jerk, it’s gonna help us.”

Obeidallah likes to take cues from what his African-American, LGBTQ, Jewish and Latino comedian friends have done with their stand-up routines: poking fun at their own group.

“I have a friend who went to the airport who wore a shirt that said in Arabic ‘I will not be silent,’ ” Obeidallah said. “I’m like, ‘You will not be flying with this shirt. This is not the look.’ ”

He mused about a potential solution for people with accents waiting to board a plane.

“If you have a Middle Eastern or South Asian accent and security asks where you’re from, throw in words from other languages so they don’t know where you’re from,” he said. “So security goes, ‘Excuse me sir, where are you going?’ It’s like, ‘Where are am I going, mon cheri? To see my Mamma Mia and have a fajita — mazel tov!’ ‘That guy’s a genius, let him through!’ ”

The essence of these jokes center around the common issue of profiling; Obeidallah remarked that “comedians are ambassadors” who tell the stories of the marginalized.

His documentary “The Muslims are Coming!” highlighted this. After showings of the film in five Southern states, Obeidallah and his crew set up tables encouraging people to “ask a Muslim anything.” He does a similar segment on his radio show.

“I believe the greatest antidote to misconceptions is an honest, defensive-free, judgment-free conversation — if the person has an open mind,” he said.

To make his group more accessible, those behind “The Muslims are Coming!” hosted what Obeidallah called “Americana” events at bowling alleys and shooting ranges. And when people ask him how he thinks the film or his joint stand-up act, Standup For Peace, have made an impact, he refers back to emails he’s received, the senders writing they learned something about Muslims they never knew.

“I’m not so delusional to believe a great joke alone will change the world or change societal norms or change someone who hates Muslims or hates African-Americans or Jews or LGBT (people),” he said. “One joke can’t do that. But I think all of these collectively have an impact.”

For example, no amount of parodies stopped Trump from being elected president, but humor surrounding the executive branch today, he said, serves a different purpose.

“At the very least, comedy now is cathartic for those people who don’t like Donald Trump,” Obeidallah said. “I think it’s empowering, I think it recharges us in a difficult time. I think comedy can be used to call out Trump’s ridiculousness in a funny way.”

America does have to worry, though, he said, about its connection to these caricatures. After Sean Spicer resigned as White House press secretary, instead of commenting on Spicer, many people mourned the loss of Melissa McCarthy’s SNL portrayal of him.

That being said, comedy is not meant to be a “makes you just feel good, everything’s fine” practice — it needs to take responsibility.

In what appears to Obeidallah as a high-stakes climate laden with “bigotry, racism and sexism,” so-called Trump’s America is the “most-challenging, yet most joke-ridden time ever.”

Sharing one last quip, Obeidallah recalled a time an American customs officer at the Toronto Airport pronounced his last name correctly. Taking a look at his name tag, Obeidallah realized the employee was also Muslim.