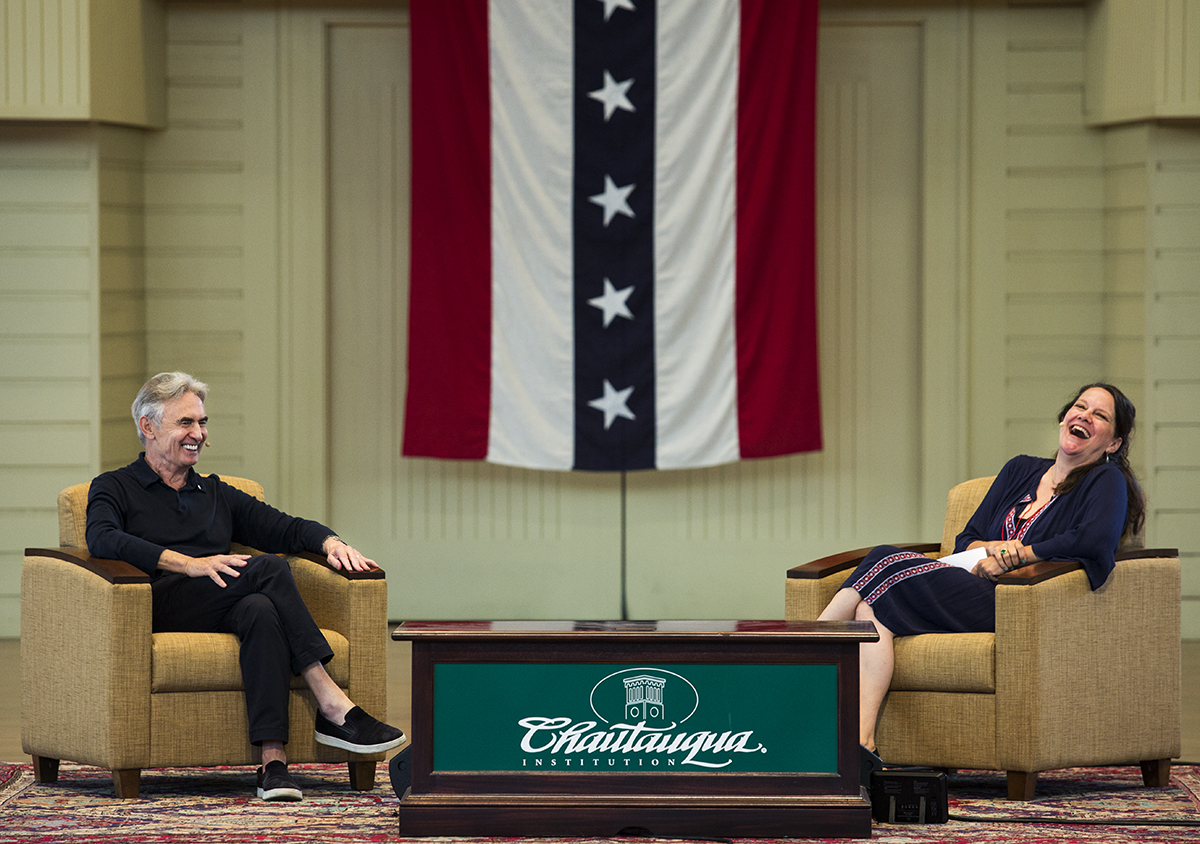 Before a joke can get to the good part — the punchline — it needs a setup.

Interestingly, the same is true of joke-tellers.

“I always love to start at the beginning … that’s my thing,” said Kelly Carlin, a writer, speaker and radio host with a comedic legacy of her own. “I love origin stories.”

So, speaking Tuesday morning in the Amphitheater as the second act in Week Six: “Comedy and the Human Condition,” Carlin and her guest, comedian and director David Steinberg, did just that. They started at the beginning.

“What was that impulse that you had that actually got you on a stage for the first time to do something funny?” Carlin asked Steinberg.

“My older brother was funny; that helped a lot,” said Steinberg, whose credits range from “The Smothers Brothers Comedy Hour” to “Curb Your Enthusiasm” and who has been described by The New York Times as “a comic institution himself.”

“(He) didn’t let me not see Abbott and Costello … the Marx Brothers, all of that,” he continued. “As a kid, I saw all of that.”

And for Steinberg, it was only a matter of time for him to transition from sitting in the audience to standing on the stage.

“Did you know what you were getting into?” Carlin asked.

“No,” Steinberg said. “But … it is the only sort of career where you get better by failure, and have to fail. If you’re not failing as a comedian, you’re just not doing it right.”

“And I was great at the failure part,” he added.

Growing up among Russian immigrants with good senses of humor, Steinberg had a solid base on which to build a comedic career. Out of college, he joined the Chicago improv group The Second City, where he worked with people like Barbara Harris, Alan Arkin and Mike Nichols.

“(It was) a remarkable company of people, working comedy from the top of their intelligence,” Steinberg said. “(Because) comedy was sort of, you could be as silly as you want and as stupid as you want and as smart as you want, but basically getting laughs and connecting with an audience.”

It was there that Steinberg developed his particular brand of religious comedy. A former theology student with a rabbi for a father, he was lucky that the McCormick Theological Seminary was “down the street” from The Second City theater, providing him with an audience before which to test the sort of material he was personally drawn to.

“They were showing up, and I said, ‘Let me do any character from the Old Testament,’ ” Steinberg said. “And I thought I could play a reform rabbi who was not as smart as he should be, and I let (the audience) suggest any Old Testament personality.”

Prompted by Carlin to demonstrate the bit with a Moses impersonation, he launched into a humorous rendition of the prophet’s life story.

(Comedy) is the only sort of career where you get better by failure, and have to fail,” he said. “If you’re not failing as a comedian, you’re just not doing it right.”

“There’s a bush burning next to Moses in the desert, yet it will not consume itself; it just keeps on burning,” Steinberg said. “And God said, ‘Moses, take off your shoes from … your feet, approach the burning bush.’ Moses approaches the burning bush, burns his feet.”

“There are many New Testament scholars,” he concluded, “that believe it was the first mention of ‘Christ’ in the Bible.”

Carlin noted that it was this sort of material that got Steinberg in trouble while he was on the late ’60s “Smothers Brothers” variety show. One of his biblical lampoons, during the show’s highly successful first season, “got the most negative mail,” Steinberg said.

“CBS told Tommy (Smothers), ‘Have David Steinberg, we’re fine, but don’t let him do another sermon,’ ” he explained.

“And you don’t tell Tommy Smothers not to do something,” Carlin said.

“No; the first thing he said — and I didn’t know that this was going to happen — he said, ‘You’ve got to start with another sermon,’ ” Steinberg said.

This was despite the show having received a roomful of “nothing but duffel bags,” each one filled with hate mail.

Ultimately, “they were thrown off the air for, supposedly, one of the sermons that I did,” Steinberg added.

The eponymous brothers themselves sued the studio on free speech grounds and won. But even though they got money, Steinberg said they had still “lost (their) careers.”

Their social critique had been deemed socially unacceptable, it seemed. It was a set of circumstances that prompted Carlin to bring up the role of comedy in society at large.

“What’s the purpose of satire?” she asked.

To Steinberg, a lot of it comes down to hypocrisy.

“Right now, given Trump … (and) given the language that’s going on … it’s unbelievable that that would be a political platform for someone, given what I’m talking about from the ’70s, and just dealing with the Bible,” Steinberg said.

“It is confusing, it really is confusing,” Carlin said. “And … when you were doing your satirical material, were you consciously trying to evolve the consciousness of your audience, or was this just your lane and you were just there to get them to laugh? Like, is there a subtle agenda underneath?”

“There is no agenda,” Steinberg responded. “It is your thumb print, the way in which you do it …  (so) when I got into politics … I was maybe a little more aggressive at going at President Richard Nixon and being on ‘The Tonight Show’ during an election year for him.”

Steinberg was no radical — his material was more “silly little things,” like saying that Nixon’s face looked like a foot — but it was enough to earn him some hecklers every time he mocked the president during a set.

In fact, it seemed to be the same (notably anti-Semitic) heckler each time.

“That kind of following me and heckling me, that sort of followed me,” Steinberg said. “And it ended not much after that at the Plaza Hotel … and as I was getting ready to go down the stairs (to open a show), there was a knock on our door.”

It was the FBI.

Steinberg got security during the show, and received police protection from then on. Now with bodyguards in tow, the comic continued to do shows where he could be “as political or apolitical as (he) wanted to be.”

Later, during the Nixon hearings, Steinberg saw those same cops sitting in the courtroom behind Donald Segretti, a key player in the Watergate scandal.

“That’s when I started to realize that I’m just a comedian,” Steinberg said. “Really, I had no plan to overthrow the government.”

Turning to modern politics, Carlin asked whether the “court jester” role filled by contemporary political satirists like Jon Stewart might have played a role in President Donald Trump’s rise to power.

“One brings the other,” Steinberg said. “One is bad, one is good, depending upon your political point of view, but that’s pretty much how it worked.”

As the dialogue turned to another political issue — political correctness — Steinberg argued for more fearlessness in humor.

“The thing about stand-up comedy is (that) you have to push the envelope,” Steinberg said. “You can’t just be comfortable with what you’re doing; you have to be radical, or at least have your own point of view, and not be afraid.”

Continuing, he discussed the unique capacity of comedy to cross lines in a way other genres can’t, remarking, “It’s just magical.”

Though his stage persona was not 100 percent the real David Steinberg — “a reform rabbi bordering just on this side of Nazism” — it was still “very close” to his authentic self.

In that sense, stand-up is an opportunity for intimacy and self-exploration.

“I think that’s one of the most beautiful thing(s) about stand-up, is that there’s a raw humanity about it,” Carlin said. “For the person on the stage, you’re looking into their soul; there’s a vulnerability there.”

For both the audience and the comic, then, it is an opportunity for greater mutual understanding.

“The goal is to get at a truth,” Steinberg said. “And comedy at its best is truthful in a way that, you might have forgotten about it, it isn’t what you expected, and you’re dealing with that pure truth. The closer you get to that, the more you reveal about your own vulnerabilities, the more you connect with people who are feeling like you do.”

Being able to do that is “a great gift,” he added.

And it is because of comedy’s uniquely situated external point of view that such raw honesty is possible.

“You have to have that outsider feeling,” Steinberg said. “That allows you to identify with all the ‘outside’ everyone has.”