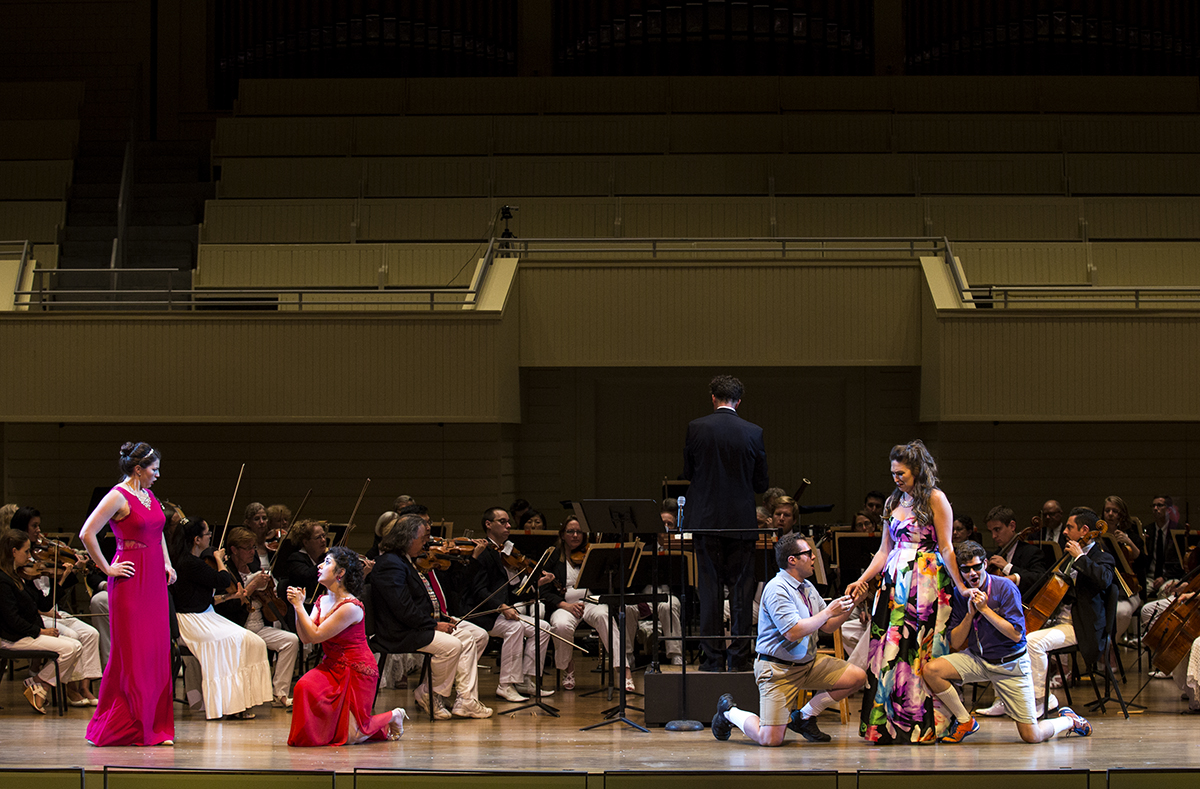 Forget about going out with a bang.

Instead, the Chautauqua Opera Company is capping its season with some pops … Opera Pops, that is.

“I’ve been here for 22 summers, and the audience longs for it,” said Teddy Kern. “A lot of this music is their music, familiar to them like their bones, their skin.”

The music that Kern, a guest instructor and choreographer with Chautauqua Opera, is referring to is a repertoire of musical theater tunes. Performing selections from such well-known productions as Guys and Dolls, My Fair Lady and Oklahoma!, Chautauqua Opera’s Apprentice Artists will join the Chautauqua Symphony Orchestra at 8:15 p.m. Saturday on the Amphitheater stage to present their final performance of the season, the Opera Pops Concert.

Carol Rausch, Chautauqua Opera’s music administrator and chorus master, was one of the parties integral in choosing the selections to be performed. Much like Kern, she thinks the event is a tremendous way for Chautauqua Opera to close its season.

“I think going out with music theater is a great feel,” Rausch said. “People can really connect with the material.”

But as is so important to Chautauqua Opera, the concert isn’t just about making sure the audience has a fantastic time. It’s also an opportunity for the Apprentice Artists to continue to learn and develop professionally.

In fact, the chance to perform musical theater — a genre that, according to stage director Andy Gale, is approached a bit differently than opera — is a chance for those artists to better prepare themselves for their professional futures.

Gale said classical singers need to know how to sing “popular music” for several reasons, one being that opera companies will occasionally perform musicals.

Rausch concurred, saying that if a well-known company like the Lyric Opera of Chicago decides to do a Rodgers & Hammerstein series, a singer better know musical theater.

“In today’s market, you really should be able to do this,” she said. “It’s as simple as the more versatile you are, the greater chance (you have) of being hired.”

The second reason Gale feels performing musical theater is important for classical singers is that it inherently influences and affects how they approach operatic roles.

Whereas classical training can establish parameters inside which performers feel they must stay, musical theater, by its very nature, affords a bit more freedom of interpretation. Even though it can be difficult for classically trained performers to make this artistic transition, the results when they do, Rausch said, are nothing but beneficial.

In Saturday’s performance, part of that freedom includes Kern’s choreography. While the Apprentice Artists won’t be “dancing all over the stage,” Rausch said, there will be touches of the Broadway style to which musical theater is so closely akin. And which Rausch absolutely loves.

It is this love that was part of what made picking the selections for the concert such a joy for Rausch. The other part was the Week Six theme, to which she and the rest of the music staff tried to adhere.

“Comedy and the Human Condition,” could mean a million different things, Rausch said. She stayed in touch with Gale, as well as her colleagues on the music staff, throughout the process in a collaborative effort she said was “free and loose, like the material.”

The resulting program doesn’t hit on every single human condition, but what they did land on is ripe for the picking when it comes to comedy.

“We mostly picked (songs about) falling in love, or out of love, or relationships,” Rausch said.

With selections like “To Keep My Love Alive” (from Richard Rodgers and Lorenz Hart’s A Connecticut Yankee), “Marry the Man Today” (from Frank Loesser’s Guys and Dolls) and “Send in the Clowns” (from Stephen Sondheim’s A Little Night Music), the Apprentice Artists will deliver a program that Rausch and Gale both agree is a lot of fun.

“We could have done six concerts and still not have done all the songs that might have fit that theme,” he said.

There’s always next year, of course. But for this year, Rausch was focused on the things that matter to her most.

“I want to make sure every (Apprentice Artist) gets to shine as equitably as I can make it, and I want everybody in the audience to have a good time with it,” she said.

Whether accompanied by a bang or a pop, Chautauqua Opera’s 2017 season will absolutely close with an awful lot of smiles and even more laughs.

Gallery: Students from the VACI School of Art unload artwork