At 3:30 p.m. Tuesday, Geoffrey C. Kemp, senior director of Regional Security Programs at the Center for the National Interest, and Ghaith al-Omari, senior fellow at the Washington Institute for Near East Policy, will explore the Palestinians’ existential fears in part two of this year’s Middle East Update.

Tuesday’s session follows Kemp’s discussion Monday afternoon with Shai Feldman, Judith and Sidney Swartz Director of the Crown Center for Middle East Studies at Brandeis University, in which the two discussed Israelis’ fears and how these have evolved throughout history.

Kemp will facilitate Tuesday’s discussion and plans to explore, along with al-Omari, the history of Palestinian fears, particularly in relation to the creation of the state of Israel. The two will analyze how Palestinians have learned to live with fear and how people — in cases such as the Palestinians — become immune to fear.

“It will be a different set of issues (to Monday’s discussion) … but it will again be strictly focused on how Palestinians view their fate in this particular part of the world,” Kemp said.

According to al-Omari, many of the Palestinians’ fears stem from their ultimate objective to establish a state of their own and be in charge of their own destiny — and relate at a fundamental level to the Israeli occupation of Palestinian territories.

“The very nature of being a nation without a state is one that has produced numerous traumas from 1948,” al-Omari said.

These traumas, al-Omari said, include the creation of the state of Israel in 1948, the 1967 Arab-Israeli war, Black September — the conflict fought between the Palestine Liberation Organization and the Jordanian Armed Forces in 1970 — and the 1982 Lebanon War.

These cumulative experiences, al-Omari believes, also lead to a fear of the unknown and therefore leave Palestinians fearful of change.

“When you present … ideas that could create a fundamental change in reality, there’s also the fear of the unknown,” al-Omari said.

He believes that a lack of stable leadership throughout the years has played into this fear of change.

In order to move forward and relieve Palestinians of these fears, al-Omari believes a combination of international assistance and reliable Palestinian leadership is necessary.

“How can we create a convincing, compelling vision of the future, to which to go to the Palestinians — and to the Israelis — and say, ‘If you move beyond the status quo of conflict, the future actually holds a lot of promise,’ ” al-Omari said. “Sadly … there are very few … leaders on both sides who have moved beyond the current conflict and created a strong, compelling, energetic and vision of a more hopeful future.” 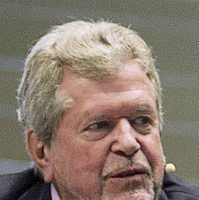