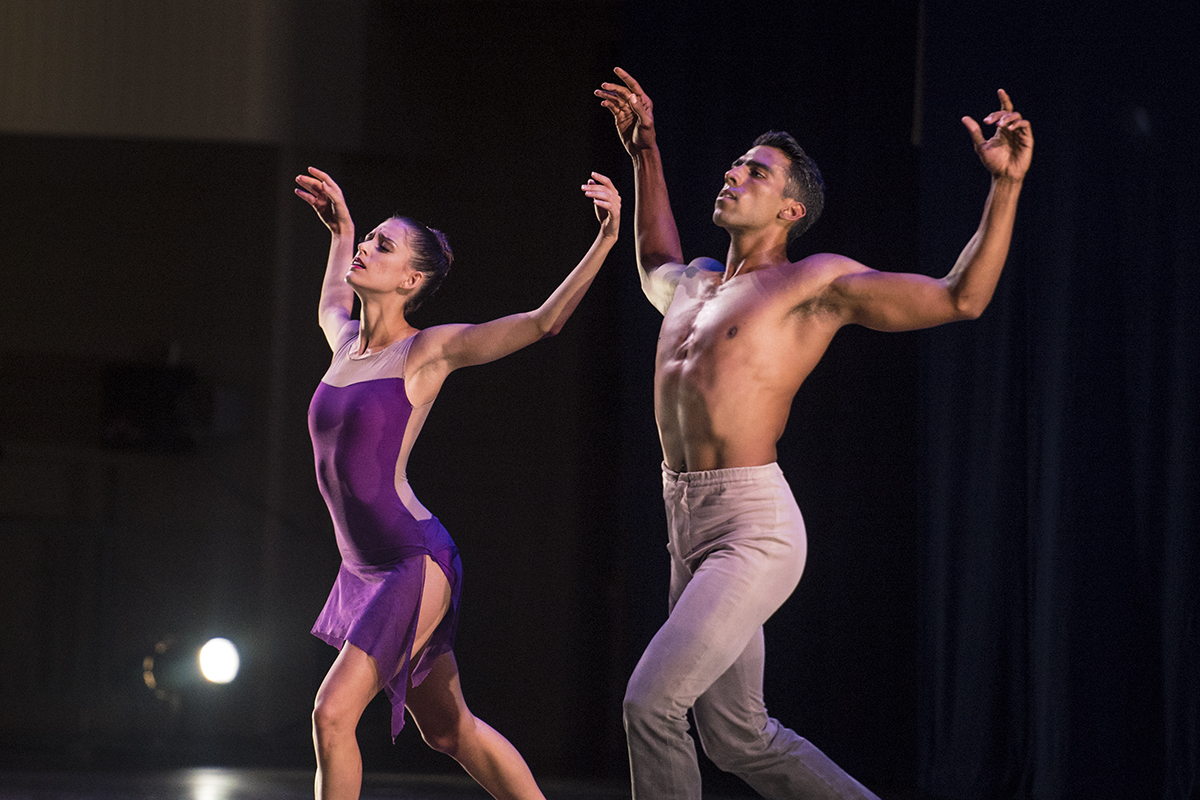 And then the audience said, looking to their programs, “Will they return?” — speaking about two of Chautauqua’s favorite dancers for the past decade. No wonder. Anna Gerberich and Peter Leo Walker, former principal dancers with the Charlotte Ballet, absolutely owned the Amphitheater Wednesday.

The two led the night where also appeared three other alumni students and two guests, invited by Sasha Janes of Chautauqua Dance, now director of contemporary studies at the School of Dance.

Take nothing away from the alumni reunion and its sampler of dances for two (along with staggered exclamations for singular excellence). But flat out this hoedown in the Amphitheater was an occasion for rousing and standing huzzahs for the various standards of dance:

Such as with Albrecht (Brooklyn Mack: Class of 2001; The Washington Ballet) leaping, leaping against the death of the beloved Giselle, and subsequently himself crumbling from a spinning height to his own art-wrought demise. And death, too, for Ryan McCreary, an apprentice with Chautauqua School of Dance. She was entrusted with curator Sasha Janes’ own work, “Shelter.” McCreary paired with the estimable Pete Leo Walker (2009-2010; Aspen Santa Fe Ballet), who knows the well-bred swagger of the cavalier — and also the invisible selfless support to the ballerina.

Janes’ work, “Shelter,” is no formally organized pas de deux. It allows for a cross-section through brief time, with Walker showing his stuff in short order, leaping, leaning on descent into a spin, an amazing condensation to make ready for the entrance  of McCreary, doing all the right vaulting kicks, spinning circles and walking on air, ever with a lightness of being that anticipates her own fatality.

It should not be a surprise that there is a plan — a form for the pas — that hides the hand of the artist:  The pas de deux is about love, really, or, of course, its absence. It is as life-affirming as the trust shared by couples. The ballerina’s safety is literally in the hands of her cavalier, who carries her aloft and supports her daring, expressive, over-the-top choices. The pas from the French is a part of the structure wherein one declares a negative: no. Contrarily, it takes steps that engage the dance; it is a right to proceed. It opens doors, and it closes them.

There is such a span of opportunity in this program. By his title as leader for contemporary ideas, one reads an attractive orientation to thought today, namely the liquidity of changing contexts, rather than the vanity of declaring the here and now as formed for everlasting in the moment.

Janes uses the 19th century as a staging ground, beginning with McCreary in a solo from Marius Petipa’s “Paquita Solo,” first offered in 1881, itself a variation from its 1846 origins, and changed by many through the years.

Change: How many dances by how many choreographers have carried the name Tchaikovsky? Here is another, the “Tchaikovsky Pas de Deux” by George Balanchine, famed founder and master of the New York City Ballet, where Patricia McBride and Jean-Pierre Bonnefoux, founders of the program at Chautauqua, danced as principals. This one was danced by Jeanette Delgado (2002: Miami City Ballet) and Gonzalo Garcia, a guest from New York City Ballet.

“Light Rain (Pas de Deux)” was the piece that brought the house down, just before intermission. It was choreographed by the late Gerald Arpino, and featured Gerberich and Walker, who are partners both on the stage and off. Walker applauding Gerberich when they took their bows was not missed. Nor was that kiss at the end.

Both are dancing now in the Aspen Santa Fe Ballet as principals. That group is one of the smartest — and most fun — in the country.

Walker is everything one would expect of the cavalier, and in his solos he is commanding, powerful and delicate, maintaining a position with a lean into the next, extending time as his signature. Gerberich has that total — total — grace that finds meaning in every finger, each ankle, every turn of the head. She has that master’s quality of never, never, being inattentive or inarticulate; her body is her lyre. Every bit of it, the song and instrument, losing no bit of art in the transition between choreographer, medium and audience. Gerberich is the medium.

I said before, sometime earlier in this century, that Gerberich’s eyes foretold her next move. The rest follows her relentless gaze, each move following that look, an integral part of the whole. And each move  is daring and bold.

Next a Balanchine oddity from 1958  dedicated to New York mayor La Guardia, which began the second act — “Stars and Stripes,” it is called, a spunky solo by Laine Habony (2011-12, New York City Ballet), who salutes and struts and the whole deal.

What a night — “Last Lost Chance Pas de Deux” by Janes with Gerberich and Walker took their palette into vigorous primary hues of the rough and smooth of de deux, as it infers the linguistic dialectic of Claude Levi Strauss’s “Raw and Cooked” — the nature and the nurture: amazing vaulted lifts that are unreal and binding; looks that still the other into submission; shadows on the wall; an imaginary film of the body with jump cuts, dissolves and a new state of dance out of alchemy. Brilliant.

And for antidote, dance to jazz master George Gershwin, also expressed by Balanchine, to conclude with sustained applause, standing, for Gerberich and Mack, heroics of the 19th century classicism (Marius Petipa) with Gerberich in tutu and Mack bare-chested with olive green sheen pants. Dance following form of costume.

And the standing applause continued until everyone had center stage.

(Finally, there were no interruptions from The Dog or any of his friends who often give voice to performance. But there really was too much applause to hear.)