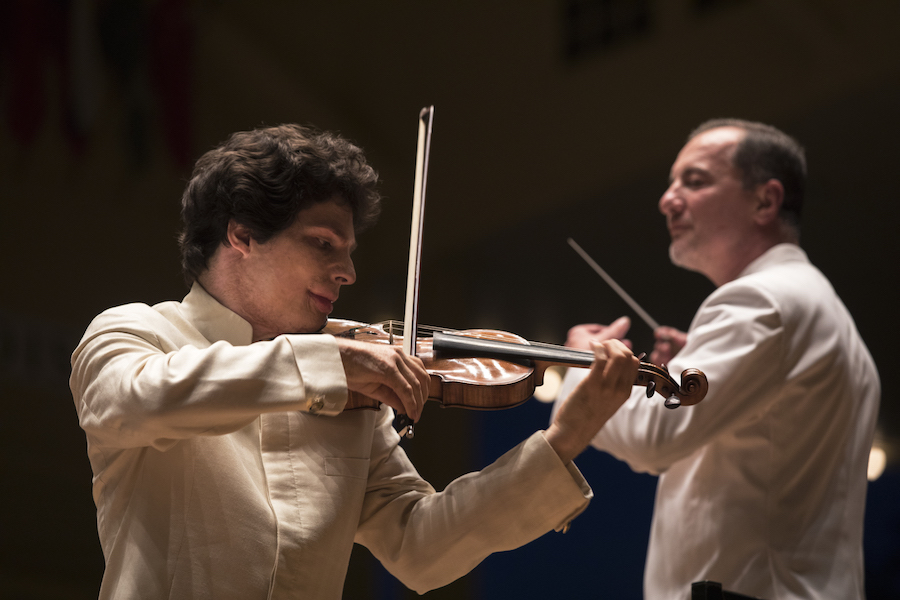 If you were looking for innovative programming at Tuesday’s final Chautauqua Symphony Orchestra concert, forget about it. The pairing of the Tchaikovsky Violin Concerto and Brahms’ First Symphony was as predictable as it gets, guaranteed to fill the house and make people go home happy.

And it worked on both counts, but let’s give credit where it’s due to violinist Augustin Hadelich and a CSO in mid-season form under its canny music director, Rossen Milanov. Together, they delivered an evening full of interpretive surprises and playing that was often dazzling.

Hadelich, who made his American debut at the Amphitheater 16 years ago, has become one of the most probing violinists of our time. He combined flawless technique, a singing — but never cloying — tone and a command of musical drama devoid of the kind of emotional hysteria that has accreted on the hull of this musical dreadnought.

It was wondrous how Hadelich’s playing could be so astounding and yet completely unselfconscious. He sustained the almost 20-minute-long opening movement by offering fine gradations of intensity upon each reappearance of Tchaikovsky’s big, juicy tunes. It might not have been good concert etiquette, but by the time the stardust had settled from his glittering cadenza, the audience was moved to stand and cheer, and it was somehow like the only appropriate response.

But it’s in slow movements that mere showmen are sifted from genuine artists, and here Hadelich, with sensitively molded support from conductor and orchestra, delivered the sweet melancholy of Tchaikovsky’s canzonetta (little song) without tears. Theirs was a lovers’ conversation, with an ardent Hadelich answered by an expectant but coy orchestra: “Yes?” “Tell me more.”

The still-boyish violinist did just that with a brilliant yet thoroughly controlled finale, proving that interpretative license and romantic excess aren’t necessary to put this concerto across. By playing it as it was written, Hadelich and Milanov delivered as good a performance of this concerto as you are ever likely to hear.

So, what do you do for an encore when you’ve just run a gold-medal-caliber marathon?  Casually toss off a world-record 100-meter dash, of course. That was the effect of Hadelich’s eye-popping encore performance of the Paganini Caprice No. 24. The violinist offered this catalog of violin fireworks and tricks, played — in both senses of that word — without any apparent effort. It was a parting gift that, one can only hope, was delivered with a note saying, “Until next year.”

Brahms’ First Symphony is a work that, to these ears, is easier to admire than to love. It’s undoubtedly great music, full of innovative harmonic misdirection and subtle rhythmic complexity. Yet like its famously flinty and difficult composer, the symphony has always landed on my musical palate like gray, boiled meat, a sometimes hectoring piece insistent on proclaiming its significance.

Milanov instead found a touching vulnerability in the music, emphasizing lyricism and building phrases lovingly with finely judged rubato. The CSO responded with a rich, amber sound and alert playing that bloomed into moments of almost ecstatic (read: “non-Brahmsian”) beauty. The closing pages of the first movement were rapturous and I scribbled the word “Brucknerian” in my notes for the adagio opening of the final movement.

There were some slow tempos; the Un poco sostenuto first movement was almost two minutes slower than the 1953 reading by Bruno Walter, no racehorse himself. But there was always an exquisite tension of power held in reserve. This was especially true in the piu andante portion of the finale that perfectly set up the entrance of the big tune. Even here, Milanov avoided empty grandiosity and sentimentality, offering dignity and nobility instead.

It was an enormously persuasive performance. If there must be Brahms Firsts, let them be like this one.

A quick technical observation: Milanov divided the first and second violins stage right and left in accordance with a now almost-never-used practice. The violas and cellos were deployed center-stage, with the basses tucked upstage behind the seconds. Was this a response to the acoustical properties of the new Amp? Who knows, but from my seat nine rows back on the right of the Amp floor, the sound was rich, resonant and balanced, though the cellos were a little underpowered.

Last year, I attended the final concert of the season when the orchestra sounded game but tired. Perhaps the imminent demolition of the Amp and labor uncertainties colored the performance. On Tuesday, they ran through the tape triumphantly. This orchestra is in very good shape and, along with their leader, seems to be adapting to their new home. When does next season start?

John Chacona is a freelance writer and producer in Erie, Pennsylvania, who writes about culture for the Erie Times-News. Follow him on Twitter @JohnChacona.