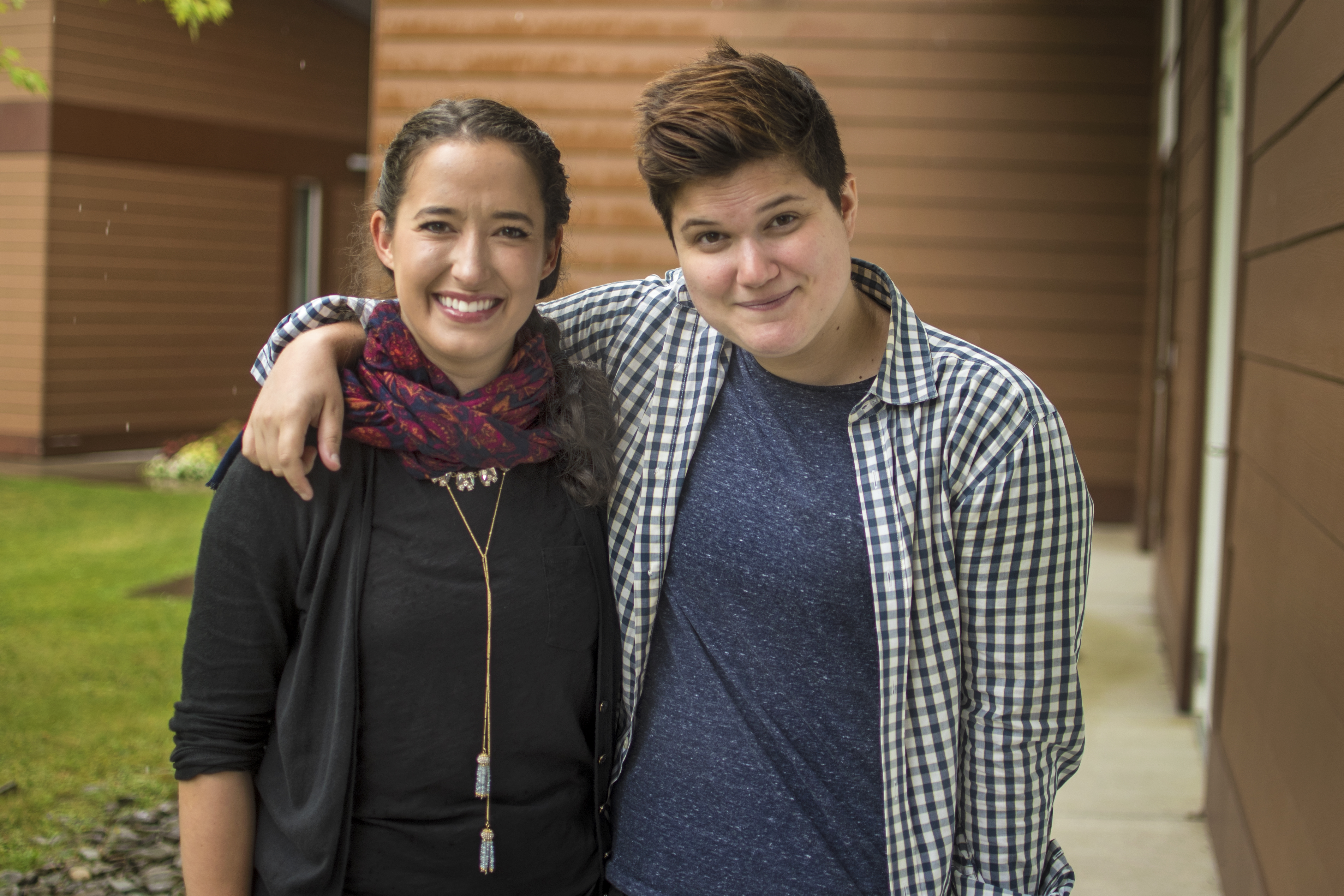 Jessica Kahkoska, left, and Preston Max Allen are recipients of the Marion International Fellowship for their “Untitled Agent 355 Project.” The two were in residence Week Seven, working on the musical theater exploration of women spies during the American Revolution. OLIVIA SUN / STAFF PHOTOGRAPHER

A female spy from the Revolutionary War, buried by history, whose existence and identity historians debate — that absolutely sounds like the basis of a woman-powered punk musical.

At least, that’s what musical theater artists Preston Max Allen and Jessica Kahkoska thought. Their “Untitled Agent 355 Project” is a musical theater exploration of the mysterious female member (or members) of the Culper Spy Ring during the American Revolution.

As recipients of the Marion International Fellowship, which is awarded annually in part through support from Chautauqua Institution, Allen and Kahkoska recently began work on the piece, which reimagines prominent colonial women as a punk-rock girl band.

“Whether or not Agent 355 was a standalone, single narrative character in history, these women existed and we want to continue to work out what that means,” said Allen, a writer, composer and lyricist living in New York City.

Agent 355 — the agent’s code name, with “355” being the Culper Ring’s code for “lady” — may have been a member of a prominent Loyalist family with easy access to British officers, or the common-law wife of a member of the spy ring, according to just a couple popular theories. In the AMC television series “Turn: Washington’s Spies,” she is characterized as a former slave.

Either way, Agent 355 is thought to have played a role in exposing Benedict Arnold as a traitor, and passed on other valuable information. And after discovering the Agent 355 story this past fall, Allen and Kahkoska began kicking around the idea.

The two met about three years ago, during Allen’s first major endeavor as a solo creator — a concert of original pop/rock musical We Are the Tigers at Feinstein’s/54 Below. Allen needed a singer, and mutual friends suggested Kahkoska, a New York-based performer and writer who also works in theater marketing.

“Even though this is our first project, we have been working in the same room for a long time,” Kahkoska said. “Now we get to work on the same thing.”

During Week Seven, both were in residence at Chautauqua. Kahkoska was here already as director of marketing and external communications at Chautauqua Theater Company, and her role with CTC opened the door for the team to apply for the fellowship. Administered by the State University of New York at Fredonia, the fellowship supports artists on a creative process that includes time at several arts institutions, and the fellows must have a connection to one of the institutions.

The fellowship supports moving an idea from the creative stage through the writing process. For “355,” Allen and Kahkoska will receive assistance along the way by traveling to work in such places as the Ucross Foundation in Clearmont, Wyoming, Fredonia and the Alley Theatre of Houston.

Ideally, the residencies and visits are times when Kahkoska and Allen can step away from their lives in the city to better focus on the project. They agreed their ultimate creative block would be finding time to write the show.

Even with Kahkoska’s work for CTC, the pair found they still had plenty of time to devote to the project. During the day, Allen worked on music and administrative work, and in the evening the two would get together, with Kahkoska focusing on dramaturgy and serving as co-creator for book and concept.

“The opportunity to relax at least opens up my mind more to being able to work than feeling really stressed,” Allen said.

At first, the two delayed outlining the book in fear it would take too much time and not be the quality they wanted. But when they sat down to do it while at Chautauqua, it came together easily, between ordering and receiving their takeout.

The team envisions the completed show will explore the Agent 355 story, with actors playing multiple roles as well as the instruments for the punk band.

“To have these actors onstage playing instruments means these women truly have agency over the storytelling,” Kahkoska said. “They are controlling the story, they are singing, they are playing, they are supporting each other that way. There’s something very powerful about moving that all onstage.”

Allen said there will be a draft of the show by the time they visit Fredonia in the late winter, early spring — and “that’s a crazy amount of time to have written a show.”

One of Allen’s favorite shows is Hedwig and the Angry Inch, and that sort of rock musical, as well as actual concerts, are a source of inspiration. Allen is also drawing inspiration from such modern artists as Kesha and Regina Spektor.

A fully developed, workshopped production is still several years down the road, but perhaps one day there will be more musicals that look to tell similar women-driven stories.