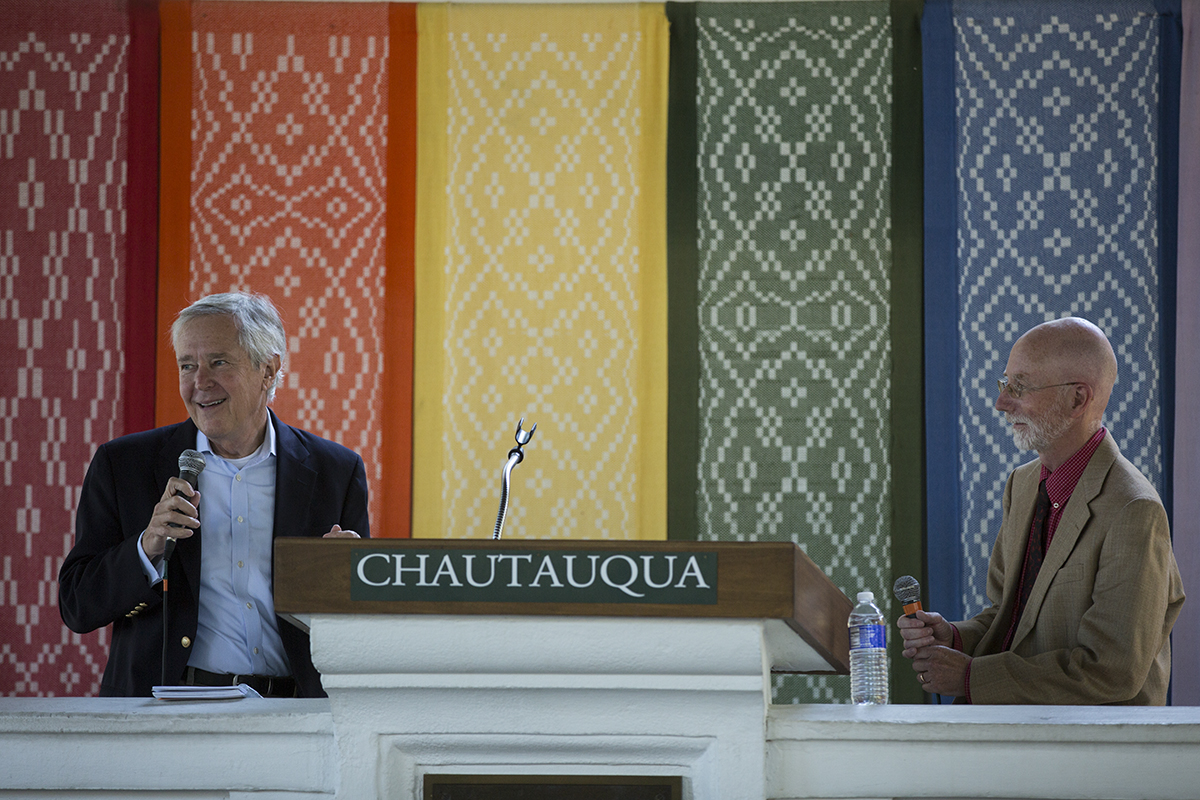 James Fallows, national correspondent with "The Atlantic," and Gustav Niebuhr, associate professor of newspaper and online journalism and religion at Syracuse University, discuss the intersection of religion and journalism on Wednesday in the Hall of Philosophy. CAM BUKER / STAFF PHOTOGRAPHER

Gustav Niebuhr told the Hall of Philosophy audience that when he took a pause, they should assume he was thinking very deeply about something. In fact, in these pauses, he wanted to make sure he would accurately present his next statement. So much has happened recently, said Niebuhr, associate professor of newspaper and online journalism and religion at Syracuse University. His lecture was, at this point, “annotated almost to death.”

When edited, Niebuhr’s speech resulted in hope — but only a bit of it. He and James Fallows, national correspondent for The Atlantic, presented “Some (Limited) Good News: Religion and the Media” as part of Week Eight’s interfaith lecture component of “Media and the News: Ethics in the Digital Age” Wednesday.

The bond between journalism and religion became especially strengthened after 9/11, Niebuhr said, as religious Americans were eager to diffuse fear and provide a safe place for people to congregate. This interfaith collaboration stuck a chord with Niebuhr. He was particularly interested in what notes the media would bring to the song.

“That process was not deliberate, but inevitable,” he said. “Journalists, at least for a decade preceding 9/11, had found a compelling new subject in how new waves of immigrants were being received in the United States.”

In 1989, USA Today printed an issue with American Muslims on the cover and an article about the month of Ramadan. Shortly after, Niebuhr said, this second generation of Muslim immigrants was “almost inevitably turning itself into a news story.” Living in the suburbs, earning middle class wages and establishing houses of worship and religious schools, they were forming a movement that journalists were curious about.

At the same time, the United States was “absorbing” 3 million Muslims, 1 million Hindus, 2.5 million Buddhists, 250,000 Sikhs and “tens of thousands” of Zoroastrians.

“You also had the opportunity for people in general to learn from what journalists were producing in that case,” Niebuhr said. “To cover new religions as a news story in the 1990s played an important role in maintaining the civilities in our nation on and after 9/11.”

People are still curious, though, about journalists’ process in covering religion, especially when religion can cause such tension. Niebuhr recalled a time a few years ago when a television producer wanted to add religion to her program but had no idea where to start.

“How do you do it?” she asked Niebuhr. “How can you cover a subject that has the capacity to make people so angry?”

Journalists, Niebuhr said, must treat religion with an interesting perspective — as both ordinary and unique. If he could have continued talking to the woman, he would have responded with a more expanded version of this message.

“Look,” he said. “You cover people and organizations all over this country that have real holds on people. You cover certainly Democrats and Republicans, you cover the NRA, you cover the Sierra Club probably. You can report about them; why can’t you report about people who claim some religious faith?”

So was it with the Supreme Court’s 1993 decision in Church of the Lukumi v. Hialeah, where a city’s prohibiting of animal sacrifice was ruled as violating the constitutional right to the free exercise of religion. Niebuhr quoted Justice Anthony Kennedy, who said, “Religious beliefs need not be acceptable, logical, consistent or comprehensible to others in order to merit First Amendment protection.”

Because of this event and many others, Niebuhr got the impression he should be covering the interfaith movement.

Interfaith work combats this corrosion, he said, such as the spontaneous, non-Muslim gatherings post-9/11 in which people locked hands around Islamic schools. He recalled President George W. Bush’s Sept. 14 visit to Washington’s largest mosque, where he declared acceptance of Islam in the United States.

“Muslims are doctors, lawyers, members of military and they must be treated with respect,” Niebuhr said, paraphrasing Bush.

“You also had the opportunity for people in general to learn from what journalists were producing in that case,” Gustav Niebuhr said. “To cover new religions as a news story in the 1990s played an important role in maintaining the civilities in our nation on and after 9/11.”

Niebuhr found Bush’s speech and actions following 9/11 so moving that he tends to share it with his students year after year. In seeing an ethical presidential response, Niebuhr hopes his students will be inspired to follow suit in their profession.

“The ethical code that underlies American journalism, as it’s been practiced over the last century … it’s not difficult to understand,” Niebuhr said. “It begins and ends with accuracy, uplifts clarity and proceeds with a disinterest — not an un-interest, but a disinterest — conducive to gathering as much information as can reasonably begot.”

According to Niebuhr, the profession is one that, at its best, must trust its audience to make the final judgment; cultivate a discipline of listening; and portray people as they are.

“Given his direct style and his focus on the American middle class, it’s not surprising that Rockwell would imagine freedom from fear as two parents tucking their small children into bed,” Niebuhr said.

What Niebuhr found especially interesting was the newspaper the painted father held in his hand; on the front page two terms can clearly be seen: “bombings” and “horror.” Niebuhr said this image furthered the American belief that the newspaper was where “responsible (people) get information.”

This pursuit of information, he said, is still a tenant of journalism, and stories like the Wisconsin Sikh temple shooting continue to inspire the religion reporter to keep writing.

“One never knows, as I say, where the interfaith story will go,” Niebuhr said, “how many surprising turns it can take and surprising opportunities for education and for the kind of work that really can take people’s breath away.”

No matter what President Donald Trump claims, Niebuhr said, the media is not the enemy. Ignorance is. He closed with words from American theologian and ethicist Reinhold Niebuhr, claiming his great-uncle could conclude it more eloquently than he.

At this close, Fallows began his series of questions.

He started by mentioning Niebuhr’s idea that journalists must not be afraid to ask seemingly basic questions for clarification.

“One of the great psychological leaps that’s necessary to be a reporter is to be comfortable always knowing less than the person you are talking to and being in this position of intellectual humility of saying, ‘I don’t understand this; explain this to me,’ ” Fallows said. “Do you teach your students at Syracuse that?”

Niebuhr answered yes; journalism is a “tremendous opportunity for learning.”

When taking into consideration what lessons journalists are learning, Fallows pointed back to Bush’s Sept. 14 mosque appearance and Sept. 20 speech to Congress for calling for resolution and confidence going forward. In tracing the path from this act of respect for Islam to the current divisive rhetoric, Fallows asked, essentially: What happened?

“Is this all just the happenstance of one person who happens now to hold the office?” he asked. “What is the course of presidential attitudes on this religious inclusiveness and respect theme? How did we get here?”

It’s as if America is looking for an enemy, Niebuhr answered. Recent times, he said, have presented “a sour period in American life.”

Fallows’ reached his final question, mentioning the often secular nature of reporters. As a result, religion coverage is often treated as a curiosity, he said.

“You were a pioneer in serious coverage of religion at serious newspapers,” Fallows said. “Is the mainstream, cosmopolitan, secular, cynical press getting better, worse, the same, in taking religion seriously, and how would you urge it to do even better?”

The coverage has improved, Niebuhr answered, as society has increasingly had to grapple with the intersection of public life and religion. He remembered his encounters in the newsrooms, where he was often identified as the religion reporter. Colleagues would approach him, prefacing a philosophical question with “you know I’m not religious.” They would then ask Niebuhr about something that had been on their mind — the meaning of life or a family problem.

“To them, that wasn’t a religion,” Niebuhr said. “Because religion to them was what they got at their bar mitzvah or what they got at confirmation. It was little colored figures and things like that. That was religion — something that had no part whatsoever in their lives.”