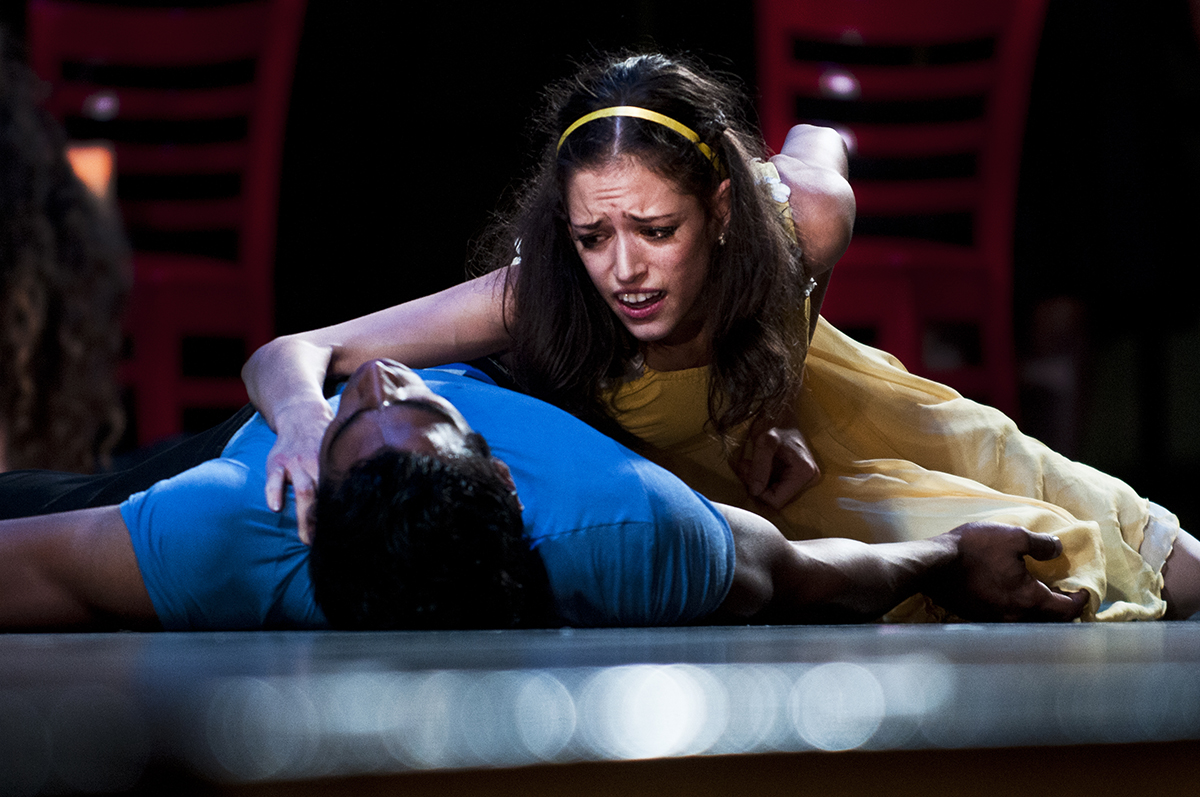 Assumptions don’t help the characters come to a happy end in Romeo & Juliet. But it’s safe to assume this wasn’t the first time artists at Chautauqua Theater Company encountered the work.

“I’ve been playing around with pieces of it for years now,” said conservatory actor Adrianna Mitchell, who portrays Juliet in the current CTC production and previously experienced the work in her high school English class and while studying abroad at the British American Drama Academy.

And even though Romeo & Juliet wraps up CTC’s season with a final performance at 4 p.m. Friday in Bratton Theater, it might also be safe to assume Chautauquans will encounter the show again.

Studying Shakespeare is a requirement under the Common Core education standards, and Romeo and Juliet is a the top seller at the Folger Shakespeare Library, which supplies much of the Shakespeare texts used in American high school classrooms.

Likewise, in theaters across the United States, the emotional tragedy is among the top-produced plays. It comes in second place as the Bard’s most popular work to produce in the country, falling to A Midsummer Night’s Dream, according to Priceonomics and Shakespeareances.

Chautauqua is part of that theatrical tradition.

In 1983, what was then called Chautauqua Conservatory Theater Company had its inaugural season. Since then, there have been two productions of Romeo and Juliet, the first being in 1998 and the second happening this season, as well as the inter-arts production of The Romeo & Juliet Project in 2013.

Although there is no formal listing of all theatrical productions performed at Chautauqua before 1983, either in CTC’s or Chautauqua Institution’s archives, theater certainly existed in Chautauqua before then, thanks to visiting companies like the Jamestown Players, Pittsburgh Players Club and Chautauqua Players.

For 51 years, Cleveland Playhouse made Chautauqua Institution its summer home, starting in 1930. During the summer of 1973, a 20-year-old Gary Mazzu was on the grounds as a student learning with Cleveland Playhouse. Part of that season: Romeo and Juliet at Norton Hall.

As Balthasar, one of Romeo’s friends, Mazzu didn’t have a major role. But the show was his first professional experience in the theater and his first opportunity to learn stage combat. He can still remember being onstage for the party scene, where Romeo first sees Juliet.

Mazzu, who now has a cabin on Chautauqua Lake and seasonally splits his time between here and Florida on acting and directing jobs, recalls Romeo and Juliet as a formative experience. He expects the current conservatory feels the same way.

“It’s a play that’s accessible to young people, more than anything else, because of the story,” Mazzu said. “The story lends itself to the whole sense of youth and what everybody experiences as they’re growing up.”

In 1998, Romeo and Juliet was the second major production for the Chautauqua Conservatory Theater, and ran in Normal Hall — the original name for Bratton Theater — from July 25 to Aug. 1 that season.

Directed by Rob Bundy, who was artistic director of Stages Repertory Theatre in Houston for 10 years, that Romeo and Juliet featured conservatory actors in all the roles. In a Daily article published the weekend the production opened, Bundy and the cast discussed the pitfalls of appearing in such a well-known work.

“It’s so much a part of our social fabric and our idea of what romance is,” Bundy is quoted as saying in the Daily. He added that in the production, “we have to be careful we’re not perpetuating cliches, but rather reexploring something that’s a pillar in our culture. I constantly have to ask myself, ‘Is this mine, or is it something I’ve inherited?’ ”

Leading the 1998 cast was Tracie Thoms in the role of Juliet. Then a student at The Juilliard School, Thoms is now known for her roles as a homicide detective on CBS’s “Cold Case” and as Joanne Jefferson in the 2005 film adaptation of the musical Rent.

Like Bundy, Thoms reflected on the challenges of Romeo and Juliet before opening night.

“It’s easy to fall into a mood trap, for example. You have to avoid that sort of frilly sensuality,” Thoms told the Daily in 1998.

Thoms wasn’t the only one in that cast to go on to a strong career. Anthony Mackie, now known as a Broadway actor and for “The Avengers” film series, was also in Juilliard and the Chautauqua conservatory. In a photo that ran in the Daily during the ’98 production of Romeo and Juliet, Mackie is credited as playing a party guest during the pivotal meeting scene.

Having first come to Chautauqua in 1990 to speak, resident Bob McClure has now seen three renditions of Romeo and Juliet on the grounds. A former president of the Friends of Chautauqua Theater, McClure remembers seeing Thoms and Mackie in Romeo and Juliet, and called 2013’s Romeo & Juliet Project “one of the greatest things ever done at Chautauqua.”

Recalling the lines of the famous balcony scene, in which Juliet declares to Romeo, “O, swear not by the moon, th’ inconstant moon,” McClure said he never tires of the poetry in the play.

“You hear those lines and it’s like hearing your favorite song again,” McClure said.

Portraying Juliet in dramatic form for The Romeo & Juliet Project was Arielle Goldman, a 2014 graduate of NYU’s Tisch School of the Arts. Since she uniquely performed alongside women portraying Juliet in ballet and operatic form, Goldman said the production will forever inform her “idea of Juliet’s journey.”

“Juliet is a massive character and a well of opportunity and adventure,” Goldman said. “My work with her is not done and may never be done.”