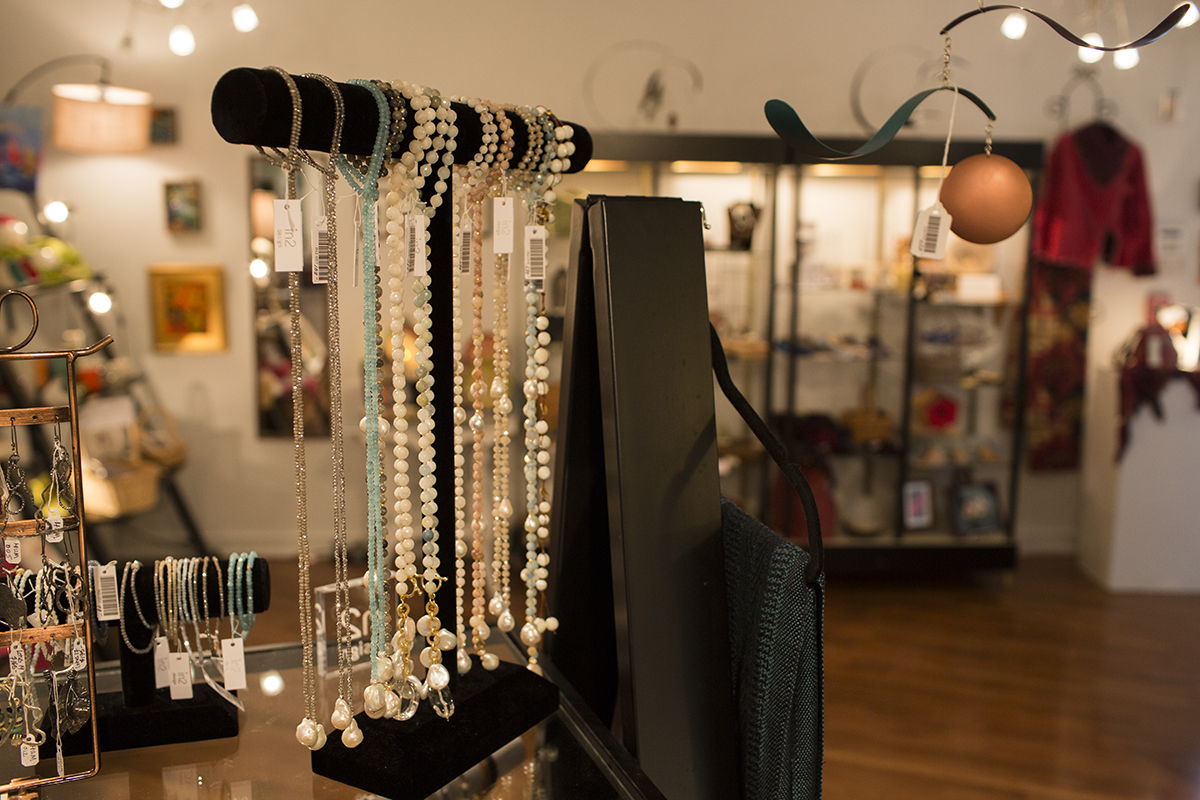 Handmade necklaces are available for sale in the VACI Gallery Store. The store is holding a 25 percent off sale through Tuesday. CAM BUKER / STAFF PHOTOGRAPHER

As the season winds down, the VACI Gallery Store will hold a 25 percent off sale on all items beginning Friday and continuing through Tuesday, the store’s last day of business. Ceramics in the Bridge Gallery will also be 25 percent off.

“When we say everything, we mean everything,” said Lynn LeFauve, the store’s manager.

Though the end of the season is fast approaching, the store still has many items available. LeFauve brings out new items from storage as the season goes on.

“In the beginning, if anything, it’s a little too crowded,” she said. “Better to have too much than too little, I always say.”

According to LeFauve, jewelry, scarves and gifts have been popular items this summer.

“The season has been really fabulous,” LeFauve said. “We are on par for any of the best seasons we’ve ever had, and potentially this could be our best season ever.”

LeFauve selects most of the items in the store. One of her favorites this summer was something she first saw at the Museum of Modern Art gift shop — ceramic cups designed to look like paper coffee cups found in New York City beginning in the 1960s. The cups have a Greek-inspired design and the phrase “We are happy to serve you” written on the outside.

“If you got a cup of coffee in a deli in New York, that was the cup,” LeFauve said.

After buying her own ceramic version, LeFauve did some research and found the cups wholesale to sell at the Gallery Store — and she priced hers lower than the MoMA’s, she said.

The mass-produced ceramic cups are one of a few exceptions at the store.

“Most of the items we sell are handmade, not mass-produced,” LeFauve said. “We do pride ourselves on that the majority of pieces we have here are done by artists who have actually really touched them.”

LeFauve has had good feedback from customers this summer.

“The comments that I’ve been getting from people are still so positive,” she said. “They are very impressed with the number and quality of the items that we sell.”

Having the 25 percent off sale is a win-win for everyone, LeFauve said. Artists, whose works are sold on consignment at the store, don’t get as many pieces sent back to them, and Chautauquans get a deal.

“Even though we’re toward the end of the season, we still have beautiful things,” LeFauve said.