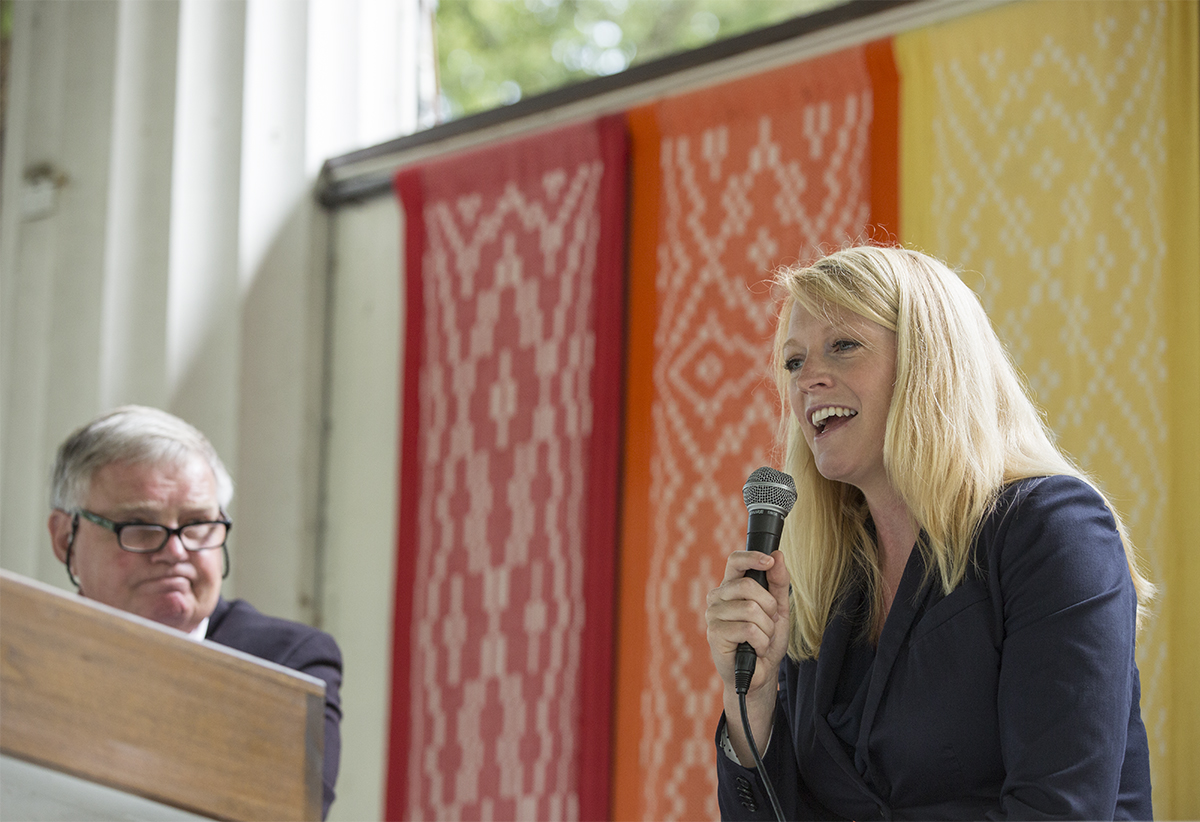 After sitting in the benches of the Hall of Philosophy “hundreds of times,” Robert H. Jackson Center co-founder Gregory L. Peterson wanted to start Friday’s dual lecture in a new format, unfamiliar to the venue’s crowd.

So, he began with a question — not one of his own, though. Instead, it was a submission from an anonymous audience member.

“Given the theme of today, which is the human spirit of human comedy, did you experience any of that during your delivery?” Peterson, via the audience member, asked.

“No, absolutely not,” answered Journey Gunderson, executive director of the National Comedy Center, who gave birth to her second child last month. “My husband keeps telling me that that was the most humorless I have ever been in my entire life.”

The pair took the podium for their lecture, “Humor: Among the Best of Human Values,” the close to Week Six’s Interfaith Lecture Series, “The Spirituality of Humor,” in the Hall of Philosophy.

Gunderson’s connections to Chautauqua run deep — not only was it her childhood “playground,” as Peterson remarked — but her grandmother, Winnie Lewellen, was the hostess of the Wensley House during Gunderson’s formative years. This status led to Gunderson’s meeting some of the icons of her youth: Mr. Rogers, Jane Goodall and Mark Russell, to name a few.

“I guess when Winnie was on the porch telling other VIPs here at Chautauqua, ‘Bill Clinton slept here,’ Mark Russell was quick to say, ‘Yeah, but with who?’ ” Gunderson said. “At which point, there was a big laugh, but then my grandma waited through the laugh and said, ‘That’s “with whom.” ’ ”

So then, her good sense of humor is an inherited trait, Gunderson said — hopefully. The audience would have to let her know at 3:15 p.m. She said Lewellen was always able to come up with a quip, and savvy in her hostessing abilities. Lewellen often hosted “limerick parties,” events where every guest was required to recite a limerick if they wanted to attend.

“Is there a better skill set to have when you’re the hostess, and you’ve got ambassadors of foreign nations meeting scientists meeting dancers and orchestra conductors on a porch for a glass of wine?” Gunderson asked.

Lewellen knew how to entertain. But what about women in comedy today? Peterson wondered.

“It’s often, for some reason, still a debate or a conversation piece: women in comedy. Are women funny?” Gunderson said. “Most female comedians would say, ‘We would love to get to the day that that would stop being a question.’ I think female athletes, like female comedians, want to be regarded as (just) athletes (or) comedians. It’s not that they’re not proud to be female, but like someone said, it’s about whether you’re funny or whether you’re athletic.”

The women in the National Comedy Center know a thing or two about humor. So much so that Thursday, New York Gov. Andrew Cuomo made an appearance in Jamestown announcing that the NCC would be granted another $500,000 by the state as part of the I Love New York campaign.

“What’s the vision here?” Peterson asked. “If you look at a crystal ball five years down the road and are looking at thematically … humor, the best of human comedy, how do you see that projecting (for the center)?”

The lecture was brilliant, Gunderson said, because as soon as a dog started barking in the distance, Black didn’t even need to say anything to get the audience laughing.

“I think it’s time for the art form to get respected, to be revered along with the other art forms and what they’ve received traditionally,” she said.

After comedian Jim Gaffigan’s Thursday show in Jamestown, Gunderson said, she saw this happening firsthand. Every comedian in attendance at his show was eager to tell Gaffigan about every exhibit in the NCC.

“If (humor) weren’t one of the best human values, it wouldn’t have raised $50 million,” she said. “It wouldn’t be happening. We wouldn’t have gotten past step one.”

But Peterson wanted to go back to the roots — the Lucy-Desi Museum, and its transition to the National Comedy Center.

Gunderson thinks a lot of the transitioning has to do with Lucille Ball herself, who, in the late 1980s, requested that the museum not just be about herself, but instead that it would highlight all comedic arts. Even though the center became a “Elvis or Star Trek conventional model for a while,” Gunderson said, it was eventually able to circle back around to being a more inclusive institution.

“I make the case that this broader approach is really serving her legacy justice — both in doing what she wanted and exposing her legacy to a broader set of people,” Gunderson said.

She loves Lucy. Because of this, she wants the craft of comedy to be respected. For some years, the center has been referred to casually as the “comedy hall of fame,” but Gunderson doesn’t think the term is an accurate representation.

“Rather than us put a flag in the ground and say, ‘We are going to induct people, and we in Jamestown are going to decide who’s in and who’s out’ … this is an art form,” she said. “These are artists. You take your take kids to the Met, and they learn about famous painters. It’s not a painter’s hall of fame.”

Peterson referenced the audience at hand in his next question: In essence, can Chautauqua laugh at itself?

“For Lewis Black to write all of these original jokes about Chautauqua shows his respect for the engagement,” Gunderson said. “To not really have had the opportunity to workshop them at all and to have them hit home pretty well was incredible, and I think it showed that Chautauquans can laugh at themselves if it’s funny, and if it’s a good writer.”

Gunderson said she was not in her position at the NCC because she was “an encyclopedia of comedy.” Rather, she sees herself as the “assembler of the team, and to be a producer and to hire the Kliph Nesteroffs of the world and the Stephen J. Morrisons of the world, who were on the Amp stage today.”

She came to these realizations when she woke up in the middle of the night with a case of the nerves — realizations that her primary role was not to know all there is to know about comedy, but to be a resource and disseminate the knowledge she has — to “oversee,” she said.

One particular moment in this overseeing stuck out to Gunderson. Comedian Martin Short was in town at the same time the NCC was planning a 5K and half-marathon.

“All (of the) press started asking, ‘Oh, people will be running the race in costume, right?’ ” Gunderson said. “And so of course, I said, ‘Yes, send a photographer!’ ”

Just in case no one else dressed up, Gunderson bought a Lucy costume and made sure The Buffalo News had a starting line photo of her.

In a Best Western hotel room, Gunderson began to pull off her wig she “Spirit-glued” onto her head hours prior, but before she could finish, she got word that Short was ready for a run-through of his routine. Gunderson was called to be a stand-in for one of Short’s jokes, in the role of a “pretty girl to come and give him a glass of champagne.” She quickly sent in her professional headshot for Short’s approval but when she got to the rehearsal, Gunderson was still in her Lucy garb.

Gunderson and Peterson closed their conversation by looking to the future of the NCC.

“These are all prospective donors to the National Comedy Center,” Peterson theorized, referring to the audience.

“Thank you all very much for your donations,” Gunderson jokingly interjected. “That’s so generous of you all!”

“If you had to give them that elevator pitch right now before we go to Q-and-As, what would that be?” Peterson asked.

Gunderson immediately launched into her spiel: First and foremost, anyone who comes to Chautauqua must value arts and culture, she said, just like the NCC. Although the center just completed fundraising for its capital budget, its endowment fund is just beginning to grow. And if that wasn’t convincing enough, donors to the NCC may have the opportunity to make their mark at the museum.

“You can only imagine what you can have your name on at the National Comedy Center,” Gunderson said. “We thought, ‘Even the bathroom stalls, you know, let’s shoot for the moon here and have as much fun as we can.’ ”