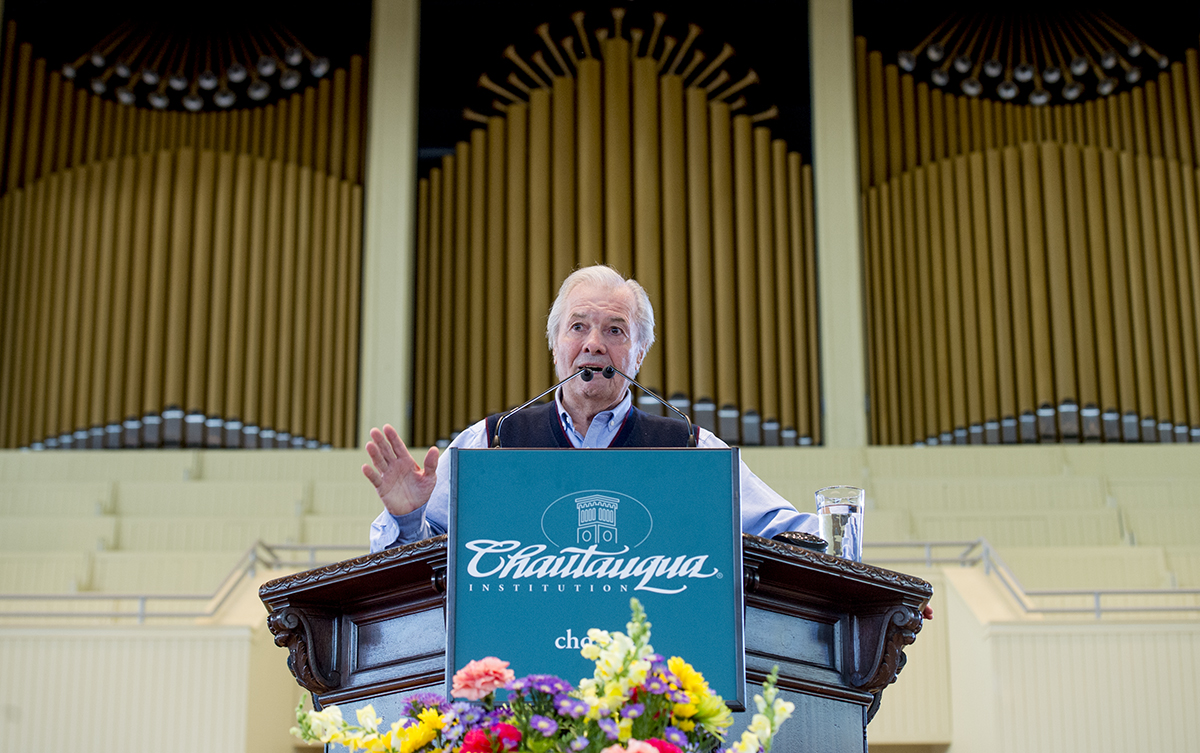 Master chef Jacques Pépin talks about his career and the evolution of home cooking Aug. 21, 2017 on the Amphitheater stage. DAVE MUNCH / PHOTO EDITOR

A couple weeks before he came to Chautauqua, someone introduced master chef Jacques Pépin by noting that he’s cooked for three French presidents.

“And the three of them are dead,” Pépin joked.

Opening Week Nine, “At the Table: Our Changing Relationship with Food,” Pépin spoke Monday morning in the Amphitheater as, nearby on Bestor Plaza, the final touches were being put on the first-ever Chautauqua Food Festival.

But inside the Amp, Pépin — host of 14 cooking shows, publisher of more than 25 cookbooks and a professional chef for nearly 70 years — had his attention focused somewhere else: a continent away, and years ago.

Pépin was born in Bourg-en-Bresse, France, in 1935, where he grew up in and around the family restaurant, Le Pélican. There, the foundation was laid for the decades of cooking to come.

“Home was actually a restaurant, where my mother was the chef,” Pépin said, “so since I was about 6 … I was in the kitchen.”

He left home in 1949 for a cooking apprenticeship, and then traveled to New York a decade later.

Once there, the culinary environment he found himself in was not only far different than what he’d grown up around, but also than what it looks like nowadays.

“Within a few weeks, I encountered my first supermarket here,” Pépin said. “And it was a far cry from what the supermarkets are today.”

There was only one kind of salad green available: iceberg lettuce. All the mushrooms were canned, and there were no leeks, shallots, tomatoes or herbs. Special oil, vinegar and ethnic ingredients, too, were nowhere to be found.

America, it turned out, offered a whole lot of packaged food. And, of course, “a great amount of cookies.”

“In the France of my youth, I used to go to the butcher, the fisherman, the vegetable vendor, the bread-maker, the pastry shop, all of which (were) in separate stores,” Pépin said. “So when I was first exposed to a supermarket, I thought it was a great idea to have everything under the same roof, you know? But there was something to be desired about the quality of the product.”

Twenty-first century American groceries, with their fresh produce and organic offerings, are a big step up from this. And in many ways they’re a return to the French plentitude he’d left behind.

“It’s almost like a deja vu situation for me,” Pépin said.

In New York, Pépin began working at the acclaimed French restaurant Le Pavillon, which was located in New York but imported many of its ingredients straight from France.

Ten months in, Pépin received not just one but two separate offers to take his skills elsewhere.

At Howard Johnson, he was exposed to mass production, food chemistry and other culinary practices he’d never seen before.

But before he could innovate with those things, he had to start off flipping burgers.

“The workers there had never heard of Le Pavillon, and didn’t know, didn’t care, that I worked for the French president before coming to the U.S.,” Pépin said. “So I had to do what you always do in the kitchen, what is still done today; you had to prove yourself, you know? Which I did.”

A few weeks in, having mastered burger-flipping, he moved to a higher, more prestigious position in Howard Johnson.

“I would stay there for 10 years as director of research and development, creating new recipes, adapting them to mass production (and) testing new equipment” like the early microwave oven, Pépin said.

There were very few American chefs during this period; most restaurants were run by Europeans.

“At that time, it was somewhat of a gastronomic desert,” Pépin said.

This phenomenon wasn’t just restricted to chefs. There were only a handful of cookbooks published per decade in the middle of the century.

But “last year there (were) 2,000 cookbooks published in America … and in the last 20, 30 years, over 40,000 cookbooks have been published.” This is alongside an explosion of cooking magazines, cooking articles and cooking shows.

Fueled by the women’s liberation movement and a cultural rejection of pre-prepared meals in the ’60s, the dynamics of culinary art continued to change as Pépin’s career grew.

“The home kitchen, which was the domain of the woman … was invaded by men at some point — especially professional men, like doctors, lawyers, businessmen, and so forth, (who) were cooking on the weekend and at home,” Pépin said. “And they (were) interested in wine and food … (and in) visiting other countries and experiencing other cuisines, other lifestyles.”

Meanwhile, as men entered domestic kitchens, women increasingly entered professional ones. In his work as a cooking professor at Boston University, for example, Pépin noticed an increasing prevalence of female students in his classes.

This shift toward gender parity was accompanied by a boost in the profession’s respectability at large.

“When I was working in Paris in the ’50s, and I would go out with friends, like to a dance hall, and invite a woman to dance, (if) she asked me what I did, I would say that I was a cook,” Pépin said. “Wow. You know, even though I was working at … the greatest restaurant in Paris, or even for the French president, it wasn’t considered a very impressive career.”

These days, amid an explosion of cooking-themed popular culture as well as a greater number of restaurants, chefs are held in much higher regard.

America is prime territory for the culinary arts, then, because of the enormous diversity of tastes it has to offer. Though some Americans eat little more than fast food, others — especially those in cities — have much broader palates.

“The diversity in ethnicity that we have in America makes the spectrum of taste of an American there much larger than a European,” Pépin said.

And where Europeans tend to stick to tradition — “95 percent of French people eat French,” for example — he noted that Americans tend to be more open-minded about what’s on their plate.

In that vein, Pépin noted the role food can have as a symbol of civilization.

“Cooking is part of life, and I think, tradition, culture, and it’s very tightly interwoven into the fabric of any society, and (it’s) a significant and integral part of social studies,” Pépin said.

Even though I was working at … the greatest restaurant in Paris, or even for the French president, it wasn’t considered a very impressive career,” Pépin said.

“The whole dining experience has very important connotations, influencing our ability to understand people, a way of life, civilization,” he added. “Cooking (is) part of history. It’s (integrated) into many disciplines, like social studies, you know, anthropology, certainly, religion, social history. And cooking can even be studied in the context of medicine, or politics, or theology, or even art.”

The science of cooking, he explained, has been probed deeply. It is the more abstract implications — food as “part of the soul, or the spirit, as part of our gastronomic heritage” — that academia has only recently started to engage with.

The role of food in literature, for instance, is a ripe field of study. From the kingly feasts of the Iliad to the sexualized wedding feast of Baudelaire’s Les Paradis Artificiels to the gastro-medical cookbooks of the 19th century, food can play any number of symbolic roles in storytelling.

Anthropologist Claude Lévi-Strauss, meanwhile, said that “the process of cooking is the process by which nature is transformed into culture,” Pépin quoted.

Food can also have religious overtones (like Jewish, Muslim or Hindu dietary restrictions) or political power (like France’s historical salt tax or President Jimmy Carter’s use of a grain embargo in retaliation for the Soviet invasion of Afghanistan).

But despite this vast body of gastronomic knowledge and his classical training, Pépin’s favorite cooking experience always comes back to a certain nostalgia for his youth.

“My preference still, in food, is associated with the home cooking of my mother and aunts,” Pépin said.

And with his wife now the owner of a restaurant herself, that familial throughline continues.

“All of that cooking associated with the women in my life, it reflects for me something which is very sacred, very comfortable, you know, certainly for a child in the world of food,” Pépin said. “When (as) a child (I came) back from school, the place to be (was) in the kitchen, to hear the voice of your mother or your father, or the cling of the equipment, the smell of the food — those are very important.”

“And those tastes which you develop in your youth,” he added, “are very, very powerful and very visceral. And you go back to those tastes over and over again through your life.”

As a younger chef, his instinct may have been to add lots of flavors and garnish to a meal. But in his older, more experienced years, Pépin knows to pare food down to its few essential elements.

In doing so, it is the food of his youth — of Bourg-en-Bresse, of Le Pélican — to which he returns.

And thus, at the end of the day, it all comes back to family.

“Cooking and eating together are certainly very, very important in our family,” Pépin said. “But the most important part of it is the time which is spent around the table.”