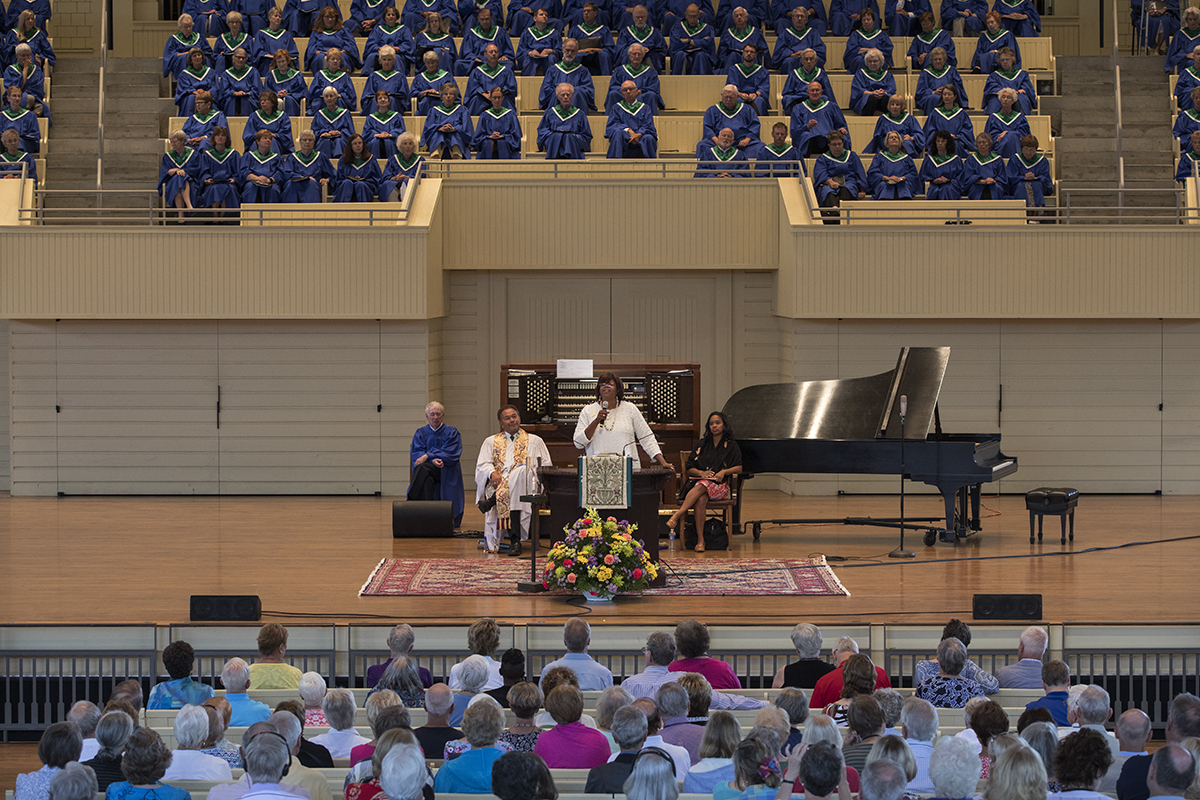 “The daughters of Zelophehad — Mahlah, Noah, Hoglah, Milcah and Tirzah — were five women who walked, worked and witnessed together. And in time, God’s time, they moved from the sidelines to the center stage because they were prepared by God,” said the Rev. Suzan Johnson Cook.

Cook, chaplain-in-residence for Week Nine, preached at the 10:45 a.m. Sunday morning worship service in the Amphitheater. Her sermon title was “The Timing of God,” and the Scripture reading was Numbers 27:1-11.

Cook called these five women “passionate and purposeful. They were not afraid to speak up and act up.”

Their father, Zelophehad, had died in the wilderness. The daughters said to Moses and the leaders of the congregation that he had not gone against the Lord as others had.

Because the sisters spoke up, God changed the statute and ordinance.

“God said to give them what they rightly deserve,” Cook said. “This was a patriarchal culture with no ethnic diversity, and girls were taught to be seen and not heard.”

But it was time to move; time to change the tradition.

The congregation responded with a loud “Amen” and applause.

One of the lessons of this Scripture was that “blessings are not gender exclusive; they are for male and female,” she said. Cook asked the congregation to turn to the person next to them and say, “You are sitting next to a blessed someone. I know because I am a child of God.”

The second lesson was “you have not because you ask not.” Don’t be afraid to ask. Cook quoted Jesus’ Sermon on the Mount: “Ask, and it will be given to you; search, and you will find; knock and the door will be opened to you.”

“As Jeremiah said, God has plans for you to prosper,” Cook said. “God is waiting for someone to ask.”

The third lesson was “you don’t have to sit on the sidelines forever.” Cook called herself a “pre-Title IX athlete” who would sit and watch the guys play basketball. One day, they threw the ball to her and told her to get in the game.

“I learned in life there is timing,” she said. “Sometimes you dribble and sometimes you shoot, but you have to get in the game. God is preparing you and dreams don’t have an expiration date.

The fourth lesson was that “timing is important.”

The daughters of Zelophehad knew it was their moment, and they stood up and spoke out.

“You can’t be so busy doing PowerPoint that you miss the point of power,” said Cook. “That is why the writer of Ecclesiastes said there is a season for everything.”

The fifth lesson was that “you have to know your history.” The daughters of Zelophehad knew that he had died an honorable man, “not like the men who dissed God in the wilderness,” she said.

Cook’s parents left the fields of North Carolina and Virginia and went to New York. They built a partnership and a business.

“I stand on their shoulders. They left a legacy so that their daughter could walk in the front door of the White House,” she said. “What a mighty God we serve. Timing, timing, timing.”

The daughters of Zelophehad were women of passion, purpose, power and peaceful protest.

Heather Heyer, who was killed when a car plowed into a group of counter-protesters in Charlottesville, Cook said, was doing peaceful protest and now her life is magnified.

“She marched so we might move,” Cook said. “Ask God for what is rightfully yours.”

God, Cook said, will say, “This is the time. Surely this is their time and turn.”

The Rev. Robert M. Franklin Jr., director of the Department of Religion, presided. Imani Renee Franklin, the daughter of Rev. Franklin and Dr. Cheryl Franklin, read the Scripture. She is a graduate of Stanford University and is currently a dual degree candidate at Harvard for a master’s degree in public policy at the Kennedy School of Government and a juris doctor degree at Harvard Law School, where she is an editor on the Harvard Law Review. David Haas wrote Responsorial Psalm 19, “Lord, You have the Words.” The Chautauqua Choir sang “Oh Happy Day” by Edwin R. Hawkins, arranged by Mark Hayes. Pati Piper, Mary Ellen Kimball and Kathleen Riley were the soloists. The offertory anthem was “Chautauqua Anthem” by Paul Moravec, which had its world premiere with the Chautauqua Choir on July 16, 2017. It was commissioned by the Motet Choir in honor of Jared Jacobsen’s more than 20 years of service to Chautauqua. Jacobsen, organist and coordinator of worship and sacred music, directed the choir. The organ postlude was “Introduction and Finale” from Sonata Éroica, op. 94, by Joseph Jorgen. The Mr. and Mrs. William Uhler Follansbee Memorial Chaplaincy and the Daney-Holden Chaplaincy Fund provide support for this week’s services.