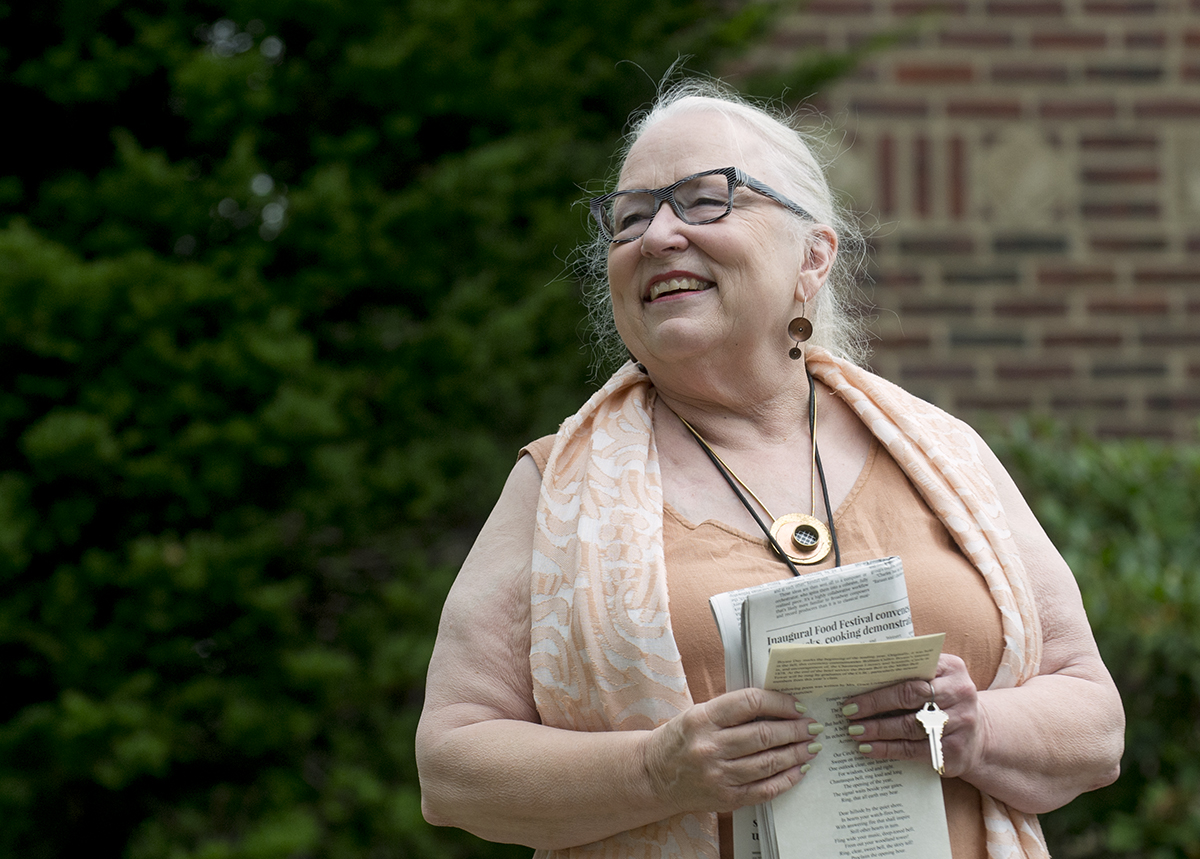 On Saturday, a new year and a new era for the Chautauqua Literary and Scientific Circle began.

This year’s Bryant Day ceremony drew a crowd of about 50 gathered by the Miller Bell Tower. Bryant Day is a longstanding tradition, meant to commemorate the start of a new reading year and to honor the most recent graduating class of the CLSC.

The ceremony is short and sweet: A poem is read, songs are sung, and a leader conducts a call and response about “the many virtues of books.”

That leader is Sherra Babcock, outgoing vice president and Emily and Richard Smucker Chair for Education. This was her final Bryant Day, after 10 years of shaping and elevating Chautauqua’s literary arts programming.

“All that humankind has done, thought, gained or been, is lying as in magic preservation in the pages of books,” Babcock said during the call and response, adapting a line from Thomas Carlyle. “They are our chosen possessions.”

Babcock was joined by Dick Karslake, president of the Alumni Association of the CLSC, Sara Toth, lecture and literary arts associate, and David Griffith, incoming vice president and Emily and Richard Smucker Chair for Education, for one of Bryant Day’s most important parts: the reveal of new CLSC selections.

After the crowd by the bell tower sung the traditional Bryant Day songs, Karslake invited the CLSC Class of 2017 to ring the Bryant Bell, the heaviest and lowest-toned bell in the bell tower.

“But first, we need to announce the book,” Babcock said.

As she prepared to reveal her final CLSC selection, Babcock shared her hopes for the future of the literary arts at Chautauqua.

“I have one book to announce for you to read in September,” Babcock said. “And then you can turn to Dave Griffith and Atom Atkinson to give you more books to read during the off-season.”

Griffith and Atkinson — who will serve in the new position of director of literary arts — will head up CLSC programming with Toth after Babcock retires.

“It is deliberate that I only have one book to announce — next season is theirs,” Babcock said as she gestured to Griffith. “I am proud of them, and I know that the books that they choose will be fabulous. But I am particularly proud of the book I’m going to announce today because it’s one of our own.”

Babcock delayed the reveal a little bit longer — she had Toth wrap the new book in an issue of The Chautauquan Daily so no one could see it. Babcock joked that she knows many people stop by the bookstore or try to peek in her bag so they can get a sneak preview of what the selection will be.

“This year, we hid the book because it’s such a special book,” Babcock said.

That special book is Andrew Krivák’s The Signal Flame, released in January 2017. The book focuses on a small-town Pennsylvania family that has lost its patriarch and is waiting for the return of its youngest son from the Vietnam War.

Krivák’s first novel, The Sojourn, won The Chautauqua Prize in 2012, its inaugural year. The Prize was established by Babcock during her tenure.

Richard Russo, one of this season’s CLSC authors, wrote in his blurb for Krivák’s book that “Readers will hear some echoes of Faulkner in The Signal Flame, and even more of Kent Haruf in the simplicity, honesty, and wisdom of its prose. But what they’ll hear most is the deep, thoughtful, resonant voice of Andrew Krivák, a writer seemingly destined for great things.”

Babcock said she knew The Signal Flame would be a great selection because some Chautauquans had already recommended Krivák’s new book for the CLSC.

It will be the CLSC selection for Week One of the 2018 season, she said, the theme of which is “For Love of the Written Word.” The week will celebrate Chautauqua’s literary traditions and the winner of the 2018 Chautauqua Prize will be honored during the week.

As attendees lined up to ring the Bryant Bell, Babcock closed the ceremony for the last time.