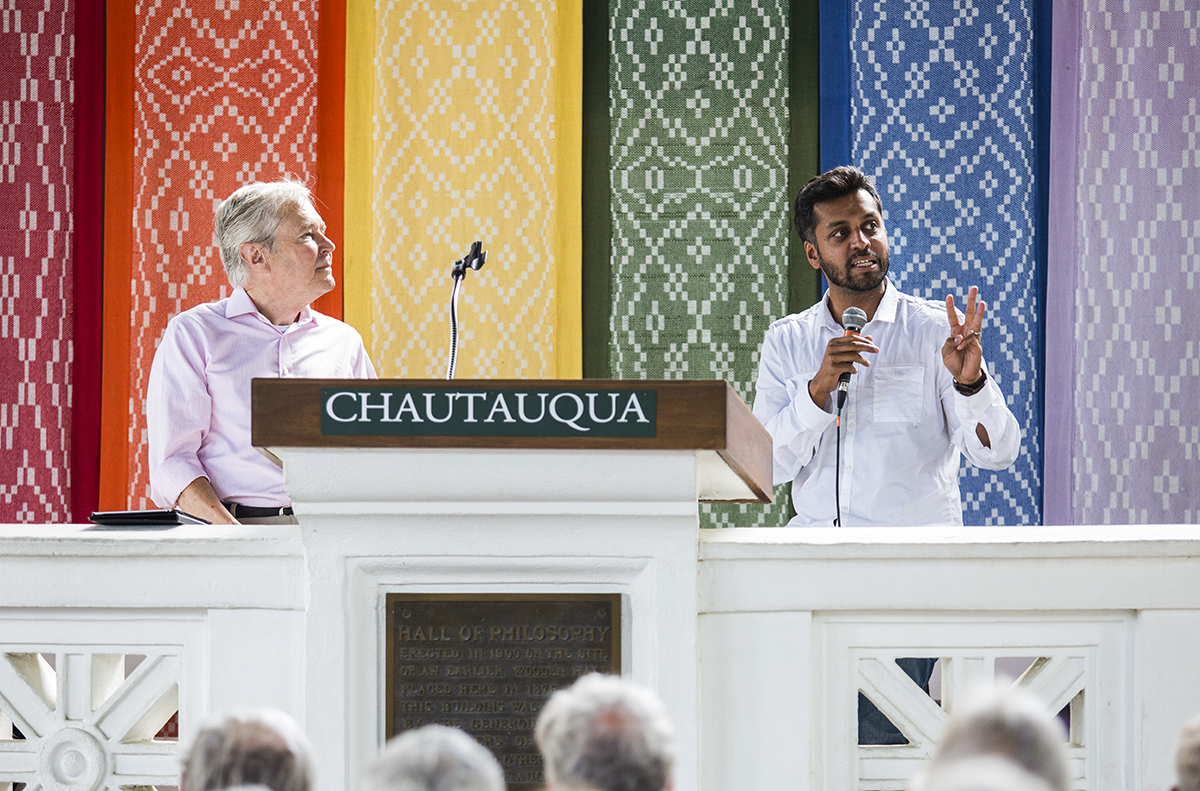 When Wajahat Ali and James Fallows took the Hall of Philosophy podium on Friday, things didn’t go as originally planned.

Due to the news events of the past week, instead of the regular Interfaith Lecture Series approach, Fallows, national correspondent for The Atlantic, resolved to delve right into his Q-and-A session with Ali, op-ed contributor for The Atlantic and The New York Times.

Hall of Philosophy speakers Michael Gerson and Peter Beinart, who took the stage Monday and Tuesday, respectively, both described themselves as people of faith, but they do not have professional careers in which they are explicit about their beliefs. Upon Fallows’ request, Ali began by describing what it is like to be overt in his own faith.

“If you were to play a drinking game — and I don’t drink because I’m a good Muslim — but if you drink, and you took a shot of alcohol each time a presidential candidate mentioned Islam or Muslims, you would be dead of alcohol poisoning August 2015,” Ali said. “If you’re like me and drink mango lassi, you’d be in a diabetic coma.”

But Ali’s faith was more of a rarity when he was in high school. Calling himself the “token brown guy” of his school, Ali said he tended to be the “spokesman or ambassador” for the entirety of Islam. It was in his collegiate years as a leader in the Muslim Student Association at University of California, Berkeley that Ali was obligated to become a specialist in his cultural identity. He was a senior when the Twin Towers collapsed.

“Overnight, you become a walking Wikipedia expert on all things Muslim-y,” Ali said. “On the drop of a dime, ever since that day … I have to be an expert on Islam, Quran, Sharia, the Prophet Muhammad, Iran, Iraq, hummus, Hamas, Fatah, fatwa, Bollywood (and) everything in between. If you make a mistake, not only are you indicted, 1.6 billion people are indicted — three to four million Muslim Americans; 1,400 years of Islamic civilization.”

Ali said that since 9/11, he’s had to be a proverbial “Muslim fireman,” putting out the fires, when sometimes all he really wants is to be a “Muslim gardener,” tending to the garden.

Fallows then asked if Ali could explain the route Americans have taken from President George Bush’s post-9/11 visit to a Washington, D.C., mosque to the present day.

If America were to take a DeLorean (the flying car made famous in “Back to the Future”) to the 2000 presidential election, Ali said, Bush would not have earned the Republican ticket — he would have been declared a “Muslim lover.”

In fact, he said 2000 was the first time Muslims, particularly in Florida and California, voted as a bloc. Unlike Democrats at the time, Bush talked to Muslims, not treating them as “the ugly boyfriend or girlfriend you didn’t want to take out in public, but to the dingy diner.” Muslims saw Bush as someone who had family values and embraced his status as a person of God, Ali said. But after 9/11, Muslims were forced to remember their inequality.

“Many immigrants who had realized the American dream realized, ‘Oh my God, we’re not white, they see us as the other,’ ” Ali said. “We did everything right. We came to this country after 1965, after the Immigration (and) Nationality Act — which allowed people like my father to come in: young students with brains, then degrees, to come in — we lived the American dream, we sent our kids to school, we did everything right, and we turn on the TV and they just see us as a terrorist or a taxi cab driver.”

Ali was in his pajamas in his college room when he watched the Twin Towers fall, and he said out loud to himself, “Things are going to be really bad for the next 10 years.” That was why when he read the news of the white supremacist marches in Charlottesville, Virginia, 16 years later, he couldn’t believe his eyes. It seemed unthinkable that men with “tiki torches bought at Walmart,” wearing clothing from “Old Navy and Gap” and chanting phrases like “Jews will not replace us” were people of the present day.

It took President Donald Trump two days to condemn this act, Ali said. He cited examples of Trump’s response to several controversies, such as the attack in Barcelona and the shooting in San Bernardino. Oftentimes, the president would react with more sympathy, Ali said, to events victimizing white people.

According to a March study done by Georgia State University, the media gives 4.5 times more coverage to terrorist attacks by Muslims.

“How does it feel to be a Muslim after 9/11?” Ali asked. “You’re perpetually condemning violent acts committed by people you’ve never met, in countries you’ve never visited, for a nameless judge, jury and executioner who will always hold your patriotism in doubt.”

After traveling to small towns with his wife while doing research for their upcoming book, Fallows found that “city-to-city, life-by-life,” the negative political rhetoric is not as prominent. Instead, it is national politics that inspired the more aggressive reaction.

This was because, Ali said, most Americans didn’t understand the basic makeup of their nation, including the time period Muslims arrived en masse to America — thanks to the slave trade. In the 16th century, anywhere from five to 30 percent of slaves were Muslim.

Five centuries later, we’re still getting it wrong. According to Ali, 65 percent of Americans do not know a Muslim. This leaves many Americans to make conclusions about the Muslim population based off of images — such as that of “Islamic Rage Boy,” otherwise known as Shakeel Ahmad Bhat. In the popular internet photo, Bhat is depicted as a “brown, bearded, angry man.”

We came to this country after 1965, after the Immigration (and) Nationality Act — which allowed people like my father to come in: young students with brains, then degrees, to come in — we lived the American dream, we sent our kids to school, we did everything right, and we turn on the TV and they just see us as a terrorist or a taxi cab driver,” Ali said.

When the media focuses on foreign policy, it tends to put the spotlight on Afghanistan, Saddam Hussein, “Not Without My Daughter,” “True Lies” and a controversial line in the opening scenes of “Aladdin.”

“(This coverage) explains why the singular image of Islam is one of violence, extremism, always rooted in national security,” Ali said. “The utility of Wajahat Ali isn’t ‘Oh, are you a good writer? Are you a good dad?’ It’s ‘What are you doing to fight ISIS? What are you doing to fight Al-Qaeda?’ Your only worth is if you’re advancing the national security narrative or if you’re not.”

In fact, according to a 2015 news report by The New York Times, FBI data showed that hate crimes against Muslims in America saw a 67 percent increase compared to 2014. And in a report by the Council on American-Islamic Relations, this number has risen to 91 percent after taking into account anti-Muslim incidents from April to June 2017.

“Persian Jews, Arab American Christians, Indian Hindus, those people with a tan, are getting shot and killed because they look like the enemy,” Ali said. “And I want to just reinforce this: American Muslims are part and parcel of the American project since the beginning. Maybe the Founding Fathers founded the nation, but black slaves built the nation, and many of those were Muslim.”

As a matter of fact, Ali and his wife wanted to give their children Muslim names, but they feared that doing so would bring their children unnecessary discrimination. So instead, they brainstormed “Muslim-y names that would be safe,” such as Adam, Lila, Sophia and Ryan. They felt they needed to “whitewash” their children’s names.

Fallows asked about the positives, then — the way Muslims in America can feel as if they are a part of the country.

Ali rattled off a number of Muslim figures in popular culture who are turning the industry upside down — comedians Hasan Minhaj and Aziz Ansari, celebrity couple Gigi Hadid and Zayn Malik, and actor Mahershala Ali.

“My generation was the one that busted out of its cocoon,” Ali said.

He has been especially surprised at Muslims’ participation in social activism such as the Women’s March, Black Lives Matter and LGBTQ movements. Even if Muslims do not agree with elements of the movements, Ali said, they want to affirm that other marginalized groups have “the right to autonomy and dignity and decency.”

If it’s any indication of America’s current state, Ali said, his family in Pakistan often says American news shows the country is “not really the most functional place on Earth.” Ali said Trump’s “wink-wink, nod-nod policy endeavors and tweets” have projected a rough picture of the nation’s future.

Other interfaith lecturers discussed white supremacy at length earlier in the week, so Fallows asked Ali about his “perception of interfaith intercession” in response to recent events, such as Charlottesville.

Despite all this, Ali has still heard his fair share of misconceptions from others.

“This includes: ‘President Obama is a Muslim’ … ‘Sharia’s a threat to America’ … ‘no practicing Muslim can be a loyal American,’ ” Ali quoted. “ ‘Mosques are harbingers, of radical Islamist terrorism.’  ‘The Muslim Brotherhood has infiltrated the Barack Obama White House.’ ”

These insults against Islam have led Ali to create a report called “Fear, Inc.: The Roots of the Islamophobia Network in America.” During his time in Israel, he was able to give a speech about the report, and the first comment he heard from a scholar afterward was “I didn’t know Muslims could be funny.”

“I have no delusions of grandeur of fixing the Israel-Palestine conflict and occupation problem. … I did for America,” Ali said.