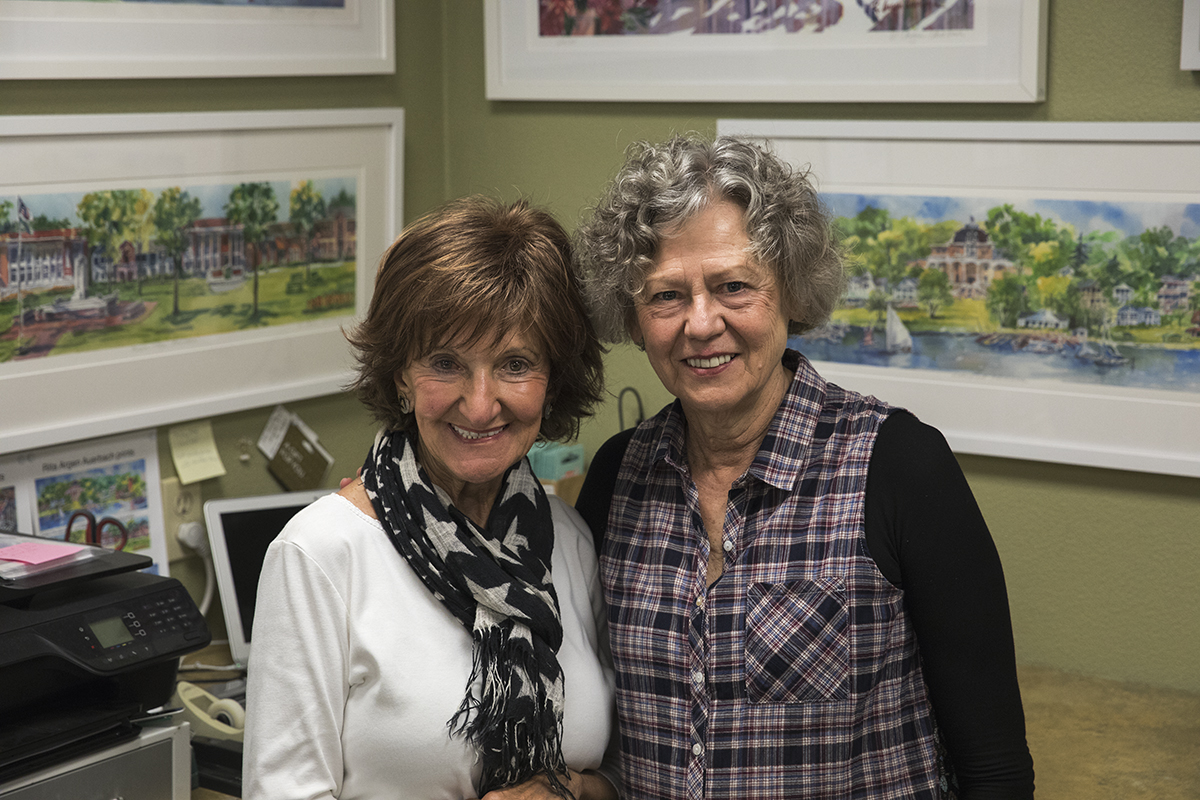 Local artist Rita Argen Auerbach, left and Pat Finson, owner of Pat’s at Chautauqua, are donating all proceeds of the sales of Auerbach’s work to the Chautauqua Fund. Finson has been selling Auerbach’s watercolors for 17 years. PAULA OSPINA / STAFF PHOTOGRAPHER

There’s a palpable feeling on the grounds this summer. People are excited with the revitalization Chautauqua is going through with the new Amphitheater, new president, new staff leadership and new vision set for the Institution.

It’s a summer of rejuvenation, and it has inspired Pat Finson and Rita Argen Auerbach to try something new.

“I think we’ve been motivated by the new future,” Auerbach said. “Moving forward and moving away from what was — which was wonderful — and moving forward to something new.”

That’s exactly what Finson and Auerbach are doing themselves.

Auerbach, a former art teacher, has been painting at Chautauqua for over 40 years. Her medium has always been watercolor and her subject matter always Chautauqua themed.

“It’s about the waterfront, it’s about the iconic buildings – the Hall of Philosophy, the bell tower, porches, wicker chairs — all the classic Chautauqua feelings and themes,” Auerbach said.

For the past 17 years, Finson has exclusively sold prints of Auerbach’s original artwork at her store Pat’s at Chautauqua — open daily in the lower level of the St. Elmo. Now the two are turning over a new leaf and, in doing so, creating an opportunity to give back to the Institution.

“I think gratitude plays a big role here,” Auerbach said. “Being so well received by the Chautauqua public of each of what we do — Pat’s products, my art, we couldn’t be more grateful.”

Finson and Auerbach plan to sell all remaining prints in stock and donate 100 percent of all proceeds from the sales to the 2017 Chautauqua Fund.

“We immediately decided on doing this that the best avenue for giving back is the Chautauqua Fund,” Auerbach said. “Because Chautauqua is what we’re about, it’s who we are.”

The prints range from $95 to $550 and are both framed and unframed.

“What is here is what will be for sale; there will be no more, no additional ones will be made,” Auerbach said. “This is like closing out the series.”

However, the partnership between the two is not over. Instead of selling prints of Auerbach’s artwork, they plan to sell Auerbach’s original mixed media sketches.

“We’re going to go forward in a different direction,” Finson said. “It’s not an ending, it’s a new beginning. Because change is good.”

Next year will be Finson’s 30th year in business at Chautauqua. That, along with the feeling inspired by the new spirit and vision of the Institution, inspired her to make this change. However, that’s not to say this shift isn’t a team effort.