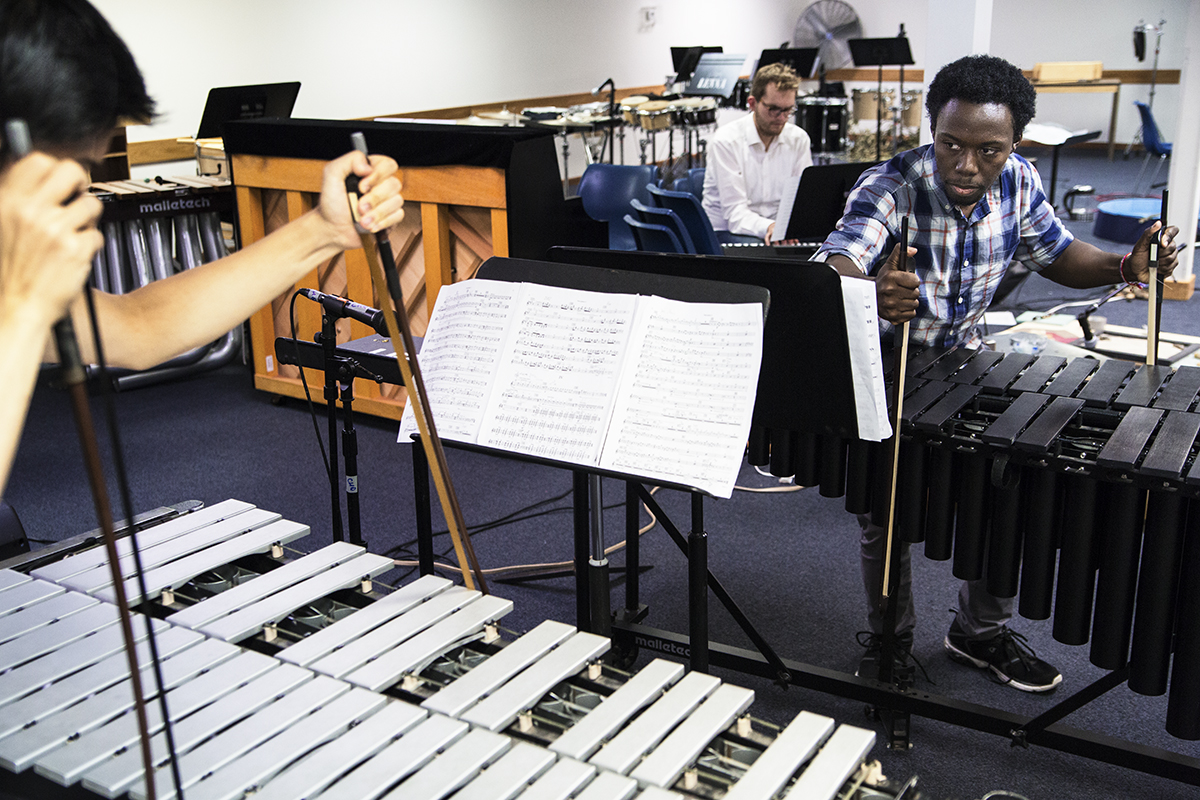 In the water dripping from faucets. In the rocks scraping the brick walk paths. In the sand between bare feet on the beach, and in the leaves drifting through the wind. There’s music all around Chautauqua Institution — not just from orchestras.

“How often do we take the time to listen?” said Matthew Duvall, the percussionist for Eighth Blackbird, a Chicago-based contemporary music sextet. “This is a listening opportunity for everybody who will be there. For just a few minutes, to say, ‘That is what sand sounds like.’ Maybe for the first time in their life to say, ‘I’ve never noticed it, it never occurred to me to even give that an opportunity.’ And there will be sounds like that throughout this project.”

Under Duvall’s direction, the percussionists in the Music School Festival Orchestra are highlighting the musical quality of everyday sounds of the environment in a concert at 4 p.m. Friday in Elizabeth S. Lenna Hall.

The four percussionists — Hannah Dick, Joshua Jones, Matthew Flanders and Miles Kim — will be performing two pieces, Matthew Burtner’s “Six Ecoacoustic Quintets” and Steve Reich’s “Sextet.” Duvall said the two pieces are extremely different from each other, but the students enjoy the diversity in the programming.

“It’s the perfect balance,” Flanders said. “We have the Reich ‘Sextet’ that’s like rock ‘n’ roll … but (Burtner’s piece) is a little more introspective. We’re bringing up social and almost-political themes of nature and conservation. It’s a different way for us as performers and even for the audience to experience this kind of music.”

The movements don’t just mimic the sounds of nature. The percussionists are using pieces from nature to create the music. Many of the movements don’t use traditional percussion instruments at all. In the “Air” movement, the students use a combination of their own breath and an altered fan to create sound. For the “Stone” movement, the musicians created their own instruments using sand, stones and sandpaper. Most of the materials the musicians collected from around the grounds.

Rest assured, though; the bones came from a butcher.

“Not everybody gets to build their own instruments,” Duvall said. “That also creates a personal investment that is really unique because you have created this thing for yourself. There’s hardly anything more personal than that.”

In addition to creating their own instruments, the percussionists are modifying existing instruments to create unusual sounds. The “Metal” movement features cymbals that have chains attached, muted pianos and various other instruments that have tinfoil added to alter the sound.

Each movement is a quintet. The four percussionists will be joined by a member of the community from various departments of the Institution to perform the movements. The guest participants are a surprise and won’t be revealed until Friday’s performance, but Duvall said only one of them is a professional musician. The other participants come from a wide range of Chautauqua groups, including the Bird, Tree & Garden Club, administration and staff, and the non-music arts.

“The message is that this material and the concepts we’re dealing with affect everybody,” Duvall said. “This is not a music concert just for musicians.”

The guest participants will play key roles in each of the movements. During the “Water” movement, the percussionists will play the surface of the water like a drum. There will be a hydrophone amplifying the sounds for the audience.

“We’re melting glaciers on stage,” Duvall said. “And confronting our audience with the reality of a changing climate.”

Although Duvall said that is the most literal interpretation of the “Water” movement, he hopes every audience member will take away a different message, just as they will with all of the movements. Duvall said the Burtner piece is open to different interpretations, based on the perspective each individual brings to their listening experience.

Unlike other concerts, or plays or books that “beat you over the head” with a message, Duvall said Burtner intentionally leaves room for audience members to draw their own conclusions. He said it ruins the listening experience when the message is too obvious.

“He’s not trying to tell people what to do,” Duvall said, “but to help people come to their own understandings so then they’ll elect people who will take care of our environment.”

The concert invites the audience to participate in the performance, too. During different movements, Duvall will direct the audience to rub stones together or to join in breathing exercises.

Often in concerts, Duvall said, audience members are asked to sit still and watch. They’re told not to move too much or “wrinkle candy wrappers” while the performer does the “virtuosic thing (they’re) trained to do.” While Duvall said there’s nothing wrong with listening, when someone is able to participate, the experience is heightened.

“When you have some sort of attachment to what just happened, it’s a completely different takeaway,” Duvall said. “You remember that differently. I want the audience to feel personally touched by what we’re doing.”