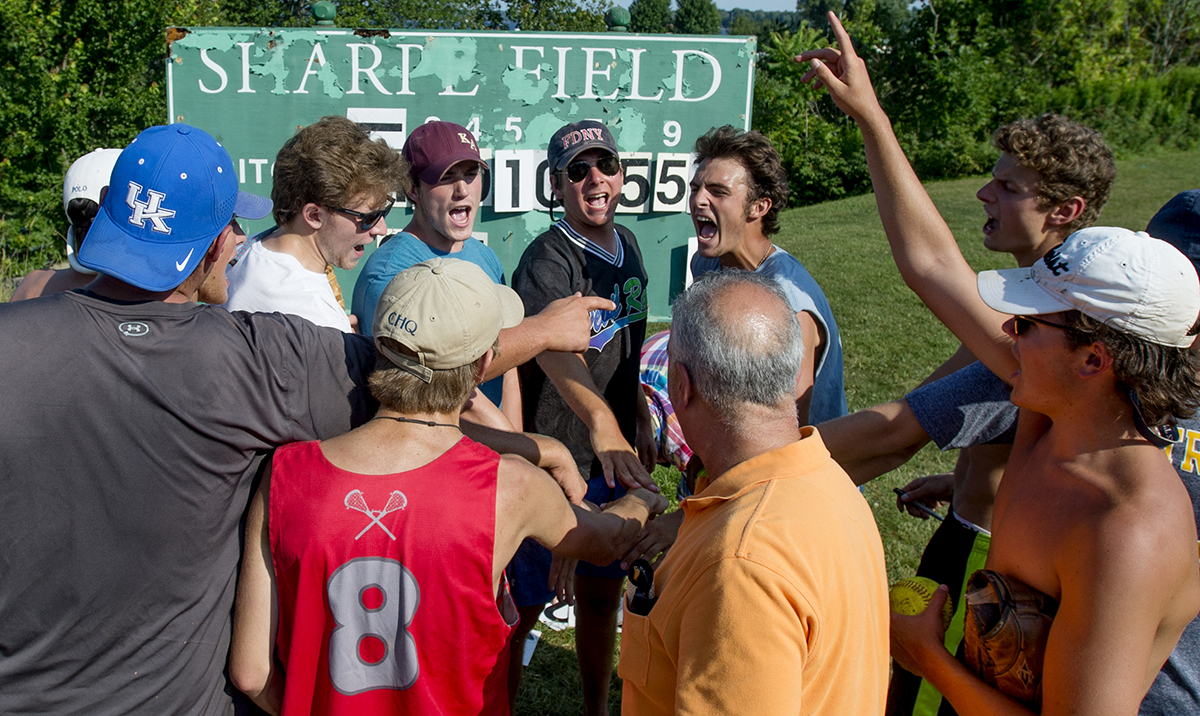 Members of the YAC PAC IV celebrate their 34-16 win over the Slugs in the Chautauqua softball championship Sunday, July 31, 2017. DAVE MUNCH/PHOTO EDITOR

Last Sunday on Sharpe Field, softball supremacy was decided as the YAC PAC beat the Slugs 34-16.

Before the championship could be decided, the Slugs and YAC PAC had to get by two scrappy teams first.

In the men’s softball playoffs semifinals, the Slugs squeaked by the Arthritics, 10-7, and the YAC PAC handled the Pounders, 19-11.

The YAC PAC are the young kids on the block, built of mostly former and current Boys’ and Girls’ Club counselors. The Slugs are a team made up of longtime league veterans and their sons playing together. The teams couldn’t be more different, fueling a rivalry dating back several years.

In the first inning, each team kept it close, scoring four runs apiece. But the second inning would dictate who came out on top.

Fourteen runs by the YAC PAC gave them a commanding 18-4 lead. Despite being in the hole, the Slugs wouldn’t quit, scoring 12 runs in the next four innings.

The YAC PAC slowed down, only putting up three runs in that time span. Going into the seventh inning with the score 21-16 and the momentum on the Slugs’ side, the YAC PAC needed to wake up.

In the seventh inning, the YAC PAC extended their lead with three runs. The Slugs couldn’t counter and the YAC PAC scored 10 more runs in the final two innings, winning the championship, 34-16.

Every member of the YAC PAC crossed the plate twice or more in the game.

Slugs player Greg Miller said his team played bad defense, but that shouldn’t take away from the YAC PAC’s win.

“They came into their own this season,” Miller said. “They blasted the ball today.”

YAC PAC team captain Henry Walsh said his team finally was at full force and wanted to make up for last season.

“They scored 18 or 19 runs in the first inning last year,” Walsh said. “So for us to score 14 runs in the second inning, it was a huge confidence booster.”

Despite a tough loss, Miller said he and the rest of the Slugs will be back next year.

“I’m the oldest of all of us at 62, so if I’m back, you know everyone else will be,” Miller said. “We just love to play together.”

As for Walsh and the YAC PAC, some will be back, while others will try to get internships or head out into the real world.

YAC PAC player Guy Scherb said he’s retiring from Chautauqua softball, but he’s happy to cap off his career by finally beating the Slugs in the championship.

“That was one of my goals this summer,” Scherb said. “I’m going out on top.”

But for Walsh, he said he’d rather be enjoying his summers in Chautauqua than stuck in a cubicle.

“Winning makes it harder to stay away,” Walsh said. “If I have the opportunity to come back to Chautauqua to defend my title, I will.”

Give your tongue a rest and listen with your heart, Sparks says