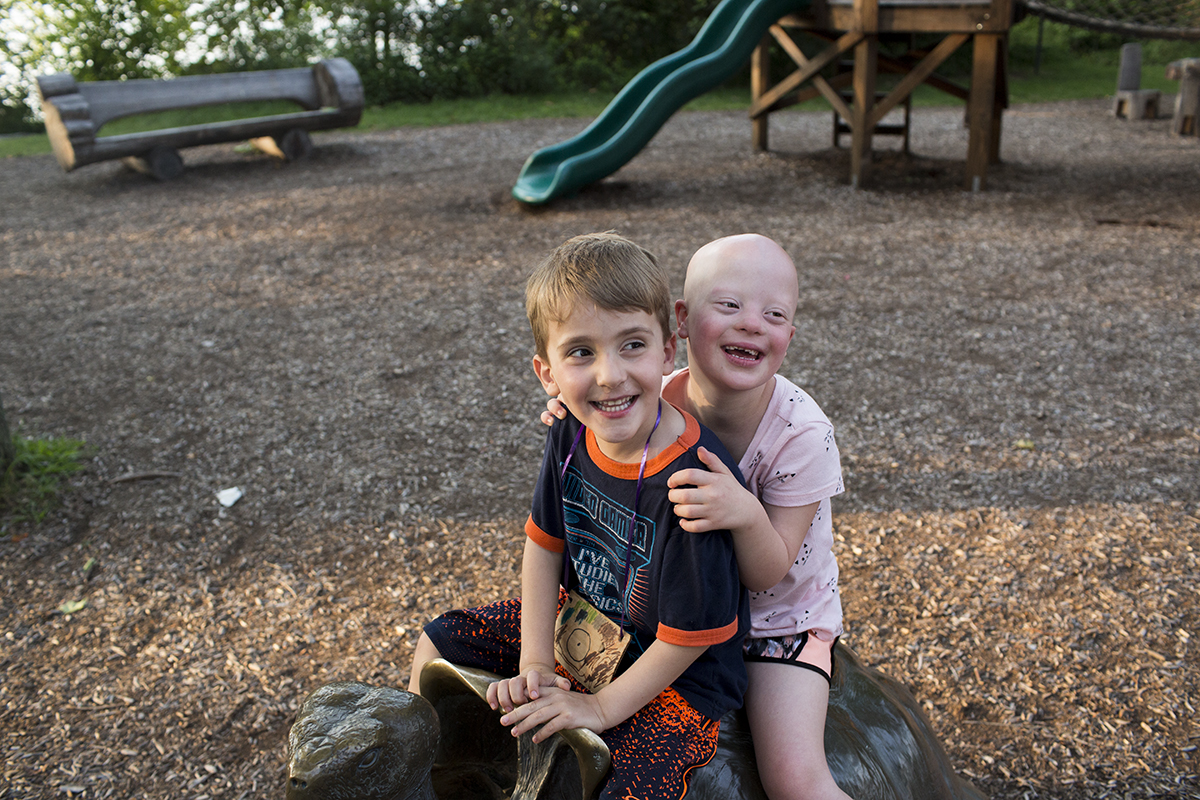 The Burkharts don’t take no for an answer.

They’ve bestowed this mantra onto their five children, especially their 7-year-old daughter Evelyn, who happens to have Down syndrome.

“We choose to embrace her as she is and not by what a diagnosis says she is,” Laren said. “It is not Evelyn.”

From day one, the Burkharts have fought skeptics.

Doctors didn’t give Laren and Paul much time to celebrate the birth of their twin daughters, Evelyn and Sylvia.

“My friend rolled me in and there’s all these doctors and fellows around my baby,” Laren said. “The doctors had their suspicions, but they didn’t know for sure. Then one of them blurted out, ‘Yeah, I wouldn’t be surprised if she had Down syndrome.’ ”

Laren struggled to comprehend the news at first. The doctor told her it’d be years before Evelyn would walk, talk and be able to comprehend basic concepts.

But through the negativity, Laren saw a positive.

As the doctor spoke, Evelyn became feisty and restless. Laren interpreted this as her daughter trying to tell her not to get discouraged.

Laren was told Evelyn wouldn’t be able to nurse. While it took a few days, eventually, Evelyn was able to nurse naturally.

Since then, she’s learned how to swim, read, play piano and use an iPad. And while her verbal skills have been slower to develop, her receptive language — the ability to understand information — has kept her on an age-appropriate education track.

Spending a day with Evelyn shows a new perspective on the world.

Outside of the Amphitheater, she loves to dance with her siblings and friends. She’ll run up to strangers, smiling bright as she waves hi.

She’s curious, often running off on her own to go explore the grounds. She lives in the present, only fazed by the external circumstances and situations she encounters.

Evelyn chooses to live her life without fear. Whether it’s pushing Paul to drive faster while they boat on Chautauqua Lake or comforting children with a hug when they’re upset, Evelyn doesn’t care what others think; she just lives life.

“There’s always somebody that won’t be nice, but she doesn’t accept it,” Laren said. “She’s a social person.”

That socialness came out at Boys’ and Girls’ Club. During her two weeks at Club earlier this summer, Evelyn would play with all the girls in her group and participate in activities ranging from Track and Field Day to Water Olympics.

Her counselor, Mackenzie Carter, said she fit right in.

“For some activities we made minor adjustments, but for the most part she did everything the other kids did,” Carter said. “She’s the sweetest girl I’ve ever met.”

The Burkharts know Evelyn may struggle with some parts of life, but no matter what they’ll let her try anything she wants to.

“We know she can do so much and we’re going to let her do it,” Laren said. “We aren’t going to accept that she can’t do something because she has Down syndrome; that’d be limiting her.”

Reid spent two weeks with Evelyn by her side, swimming in Chautauqua Lake and dancing until Evelyn tired out and crawled into her arms. At the end of the summer, Reid told Evelyn that she changed her life.

“There were very few Clubbers that had an impact on me like she did,” Reid said. “Whatever I do in my life, as long as it involves amazing kids like Evelyn, I’ll be happy.”

Reid said her experience with Evelyn changed the way she sees children with special needs.

“They are just like any other kid,” Reid said. “They understand everything that’s going on. Some people have trouble treating special needs children like everyone else, but it’s important to do that.”

As for the future, the Burkharts said they’ll let Evelyn do whatever she wants, as long as they can handle it physically and mentally.

“My daughter happens to have a disability, but she doesn’t let it define her,” Laren said. “She’s Evelyn first.”

Morning Worship: Parable with no conclusion invites readers to choose the ending