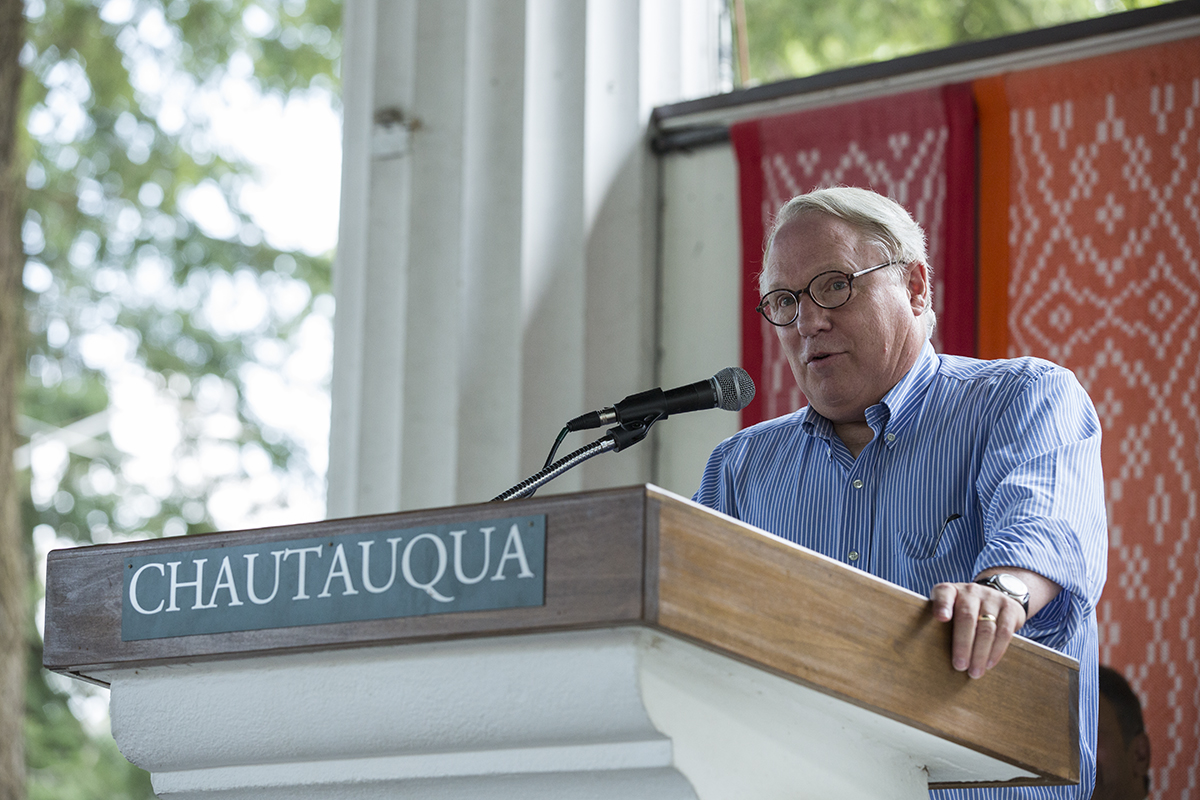 Rev. Christopher M. Leighton, executive director of The Institute for Christian and Jewish Studies discusses the topic “Going over the Edge: A Christian Approach to Humor” in the Hall of Philosophy on Monday, July 31, 2017. CAM BUKER/STAFF PHOTOGRAPHER

Leighton’s talk, titled “Going Over the Edge: a Christian Approach to Humor,” jokingly addressed this injustice in its first few statements. He started Week Six’s Interfaith Lecture Series, “The Spiritual Power of Humor,” Monday in the Hall of Philosophy.

“(Black) was like a hot cup of cocoa with two shots of espresso mixed in, and by comparison, I’m a glass of ice water,” said, Leighton, the former executive director of the Institute for Islamic, Christian, and Jewish Studies, “the ice water with little black specks in it, which, on closer inspection, have the properties of Ambien.”

Leighton’s talk was, indeed, an entirely different beverage. His preparation began with research about perceptions of Presbyterian humor — some of the most entertaining to him coming from middle schoolers — “to capture the state of biblical literacy in our country and to drive home the magnitude of the challenge.”

Adolescent accounts included statements like “Moses went up to Mount Cyanide to get the 10 amendments” and “a Christian should only have one wife; this is called monotony.”

“No doubt we can rely on new generations of Christians to cook up fresh batches and blunders and bloopers, and you can rest assured that the church will find banana peels on which to slip,” Leighton said.

But deeper than those middle-school musings, he has more pressing concerns about the state of religious humor.

“If Christian faith and humor are estranged — if not incompatible — bedfellows,” he said, “my concern is centered on the question: What becomes of a religious tradition that takes itself too seriously, a community that does not know how to laugh at its flaws and foibles, that has no aptitude for levity, is speechless in the face of absurdity and pits piety and dogmatism against playful spontaneity, laughter, frivolity (and) foolishness?”

Humor, even in religious circles, he said, has two different faces — the capability “to liberate and violate, to ennoble and degrade.”

For instance, Plato philosophized that people’s amusement often comes at the expense of others, and Aristotle, Plato’s mentee, agreed that competitive insults are at the root of humor.

Leighton called the present day’s verbal sparring matches the “latest expression of a primeval, comedic sport,” humor often defined by thought leaders as a grasp on malice, power or contempt. This is especially recognizable, he said, in “our culture’s enchantment with the scorn and mockery that is naturalized in political and social parodies, farces, joking and late-night lampooning.”

“Beneath the smile there often lurks a smirk and a snarl, so while we celebrate and take delight in the power of humor to heal and liberate, we also need to reckon with its capacity to wound and demean,” he said.

This is because humorists often depend on the objectification of others, climbing on others’ backs to get to the top.

What becomes of a religious tradition that takes itself too seriously, a community that does not know how to laugh at its flaws and foibles, that has no aptitude for levity, is speechless in the face of absurdity and pits piety and dogmatism against playful spontaneity, laughter, frivolity (and) foolishness?” he said.

“Humor delivers a jolt to the system and induces a temporary loss of control,” Leighton said. “It calls into question tyranny of the literal truth and invites risky leaps of imagination. More often than not, cultural boundaries are transgressed, and we are catapulted into the land of taboos: aggression, sex, death, immorality.”

On the other hand, religious humor delves into the arbitrary nature of life, he said, with comics attempting to assign humorous meaning to everyday activity. More often than not, these comedians play off the universal “quest for life and inevitability of death.”

Christianity, he said, has plenty of incongruities, plenty of “inside-out, upside-down beliefs” — for example, the Beatitude that “the meek will inherit the earth” — that it’s hard for Leighton to imagine a Christian lacking some sense of humor.

The ideas of incarnation, with its “divine (that) shows up in an animal trough,” and the resurrection, with its “wall of separation sundered,” Leighton said, are so ubiquitous that they have become normalized.

“Such outrageous claims totter on the edge of idolatry, mistaking something finite for what is infinite, confusing the creature with the creator,” he said.

In these accounts, boundaries between the righteous and the regular are broken, presenting yet another incongruity: “new life burst out of the grave.”

Many Christians claim their faith in these things is “rooted in mystery,” essentially glossing over the improbabilities of their belief system. This is where Leighton said some skeptics and cynics get it right.

“Efforts to use reason to establish the veracity of Christian doctrines are rarely convincing to anyone who doesn’t already subscribe to the tradition, which is why I think an appreciation of the nonsense of Christianity requires a sense of humor,” he said.

In the same way that humor “disrupts the status quo, overturns our assumptions and breaks our stranglehold on servitude,” Leighton said Jesus created parables to “jolt us out of our sluggish ways,” breaking religious people out of their sometimes-literalistic approach to theological accounts.

One biblical story in Mark 5 requires a sense of humor, Leighton said. Jesus and his disciples were weary from roaming the hinterlands and crossed the sea of Galilee for a change of pace, only for their boat to be battered by a storm and for their first encounter on land to be with a deranged man. Anyone who attempted to come near the man was in danger, and he was a threat to himself as well. Jesus recognized the man’s actions indicated the presence of a demon in him, and he asked for the “unclean spirit” to exit the man’s body. The demon identified itself as Legion. Jesus subsequently exorcised the demon and sent all of its multitudes into a nearby herd of pigs, who, now crazed, subsequently raced over a cliff and threw themselves into the sea.

“As you can imagine, New Testament scholars have spilled a great deal of ink in their efforts to make sense of this story,” Leighton said.

Norman A. Beck, author of Anti-Roman Cryptograms in the New Testament, said this story, along with many others, have subversive, underlying messages at their core. He theorizes that there are parallels between the story in Mark 5 and the Roman occupation.

Humor brings a certain flair to the religious audience not found anywhere else.

“At its best, religious humor stokes the embers of hope, inspires resistance to injustice and creates a sense of solidarity among folks who are exposed and vulnerable,” he said. “Humor here serves as an indispensable handmaiden in the birth of freedom.”

At the same time, Leighton warned that because of the sometimes-simplified nature of humor, there is often a distinction between good guys and bad guys: an “in-group,” or the joke-tellers, and the butt-of-the-joke “out-group.”

“Whether it’s Palestinian peasants who regard their oppressors as unclean animals or the oppressed and marginalized who regard the police as pigs, a sharp-edged distinction is drawn between insiders and outsiders,” he said.

Our culture, he said, has become “coarser and more mean-spirited” over time, particularly due to the recent presidential election, often giving way to caricatures of anyone in opposition.

“Both the right and left have become skillful practitioners of jokes and jest that trash their adversaries, making it nearly impossible to empathize with those with whom we disagree, all the while deepening our distrust of any and every tradition,” he said. “In giving free rein to mockery and satire, I cannot help but wonder if our daily displays of humor aren’t lubricating the slide into a deep-seated cynicism, and I wonder if it is possible that we might drown in a sea of irony.”

In accordance with these beliefs, leaders often make excuses for what would otherwise be offensive statements, exasperated when those around them “don’t know how to take a joke.” Some argue that everything goes.

Because of this, Leighton wondered aloud if faith traditions could reach a comic consensus.

“Our sense of humor best embodies our religious vocation when it enables us to see this: the incongruities that make us laugh at others are the same incongruities in which we are caught,” he said, “and from which we, too, need to be liberated.”