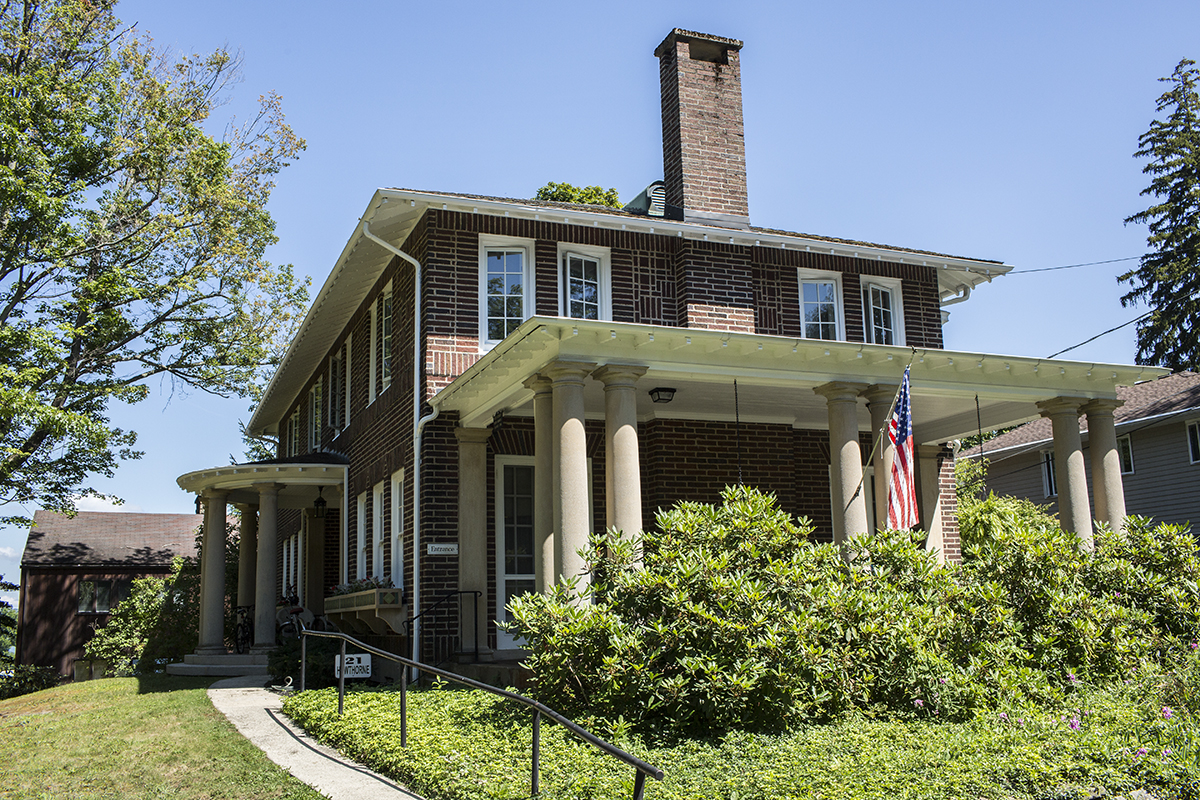 The Fenton Memorial Deaconess Home was established in 1917 as a retreat site for deaconesses; for its 100th anniversary, it will be honored at the Sacred Song Service at 8 p.m. Sunday, Aug. 20, 2017 in the Amphitheater. CAM BUKER/STAFF PHOTOGRAPHER

Servants of God have been finding reprieve at a house located just past Thunder Bridge in Chautauqua for 100 years.

Those servants, called deaconesses and home missioners, and that house, the Fenton Memorial Deaconess Home, will be honored during the Sacred Song Service at 8 p.m. Sunday in the Amphitheater. Although much has changed in the past 100 years, it is clear that the primary mission of the deaconesses — to serve others tirelessly and with humility — has not.

“May these women, who so unselfishly devote their lives to others, here find rest and recuperation,” reads the dedication plaque on the home.

James Fenton, a prominent Chautauquan and businessman from Buffalo, conceived of the idea to build a house for deaconesses around 1910, according to documents maintained by the home’s hostesses.

He had been an active member of the Delaware Avenue Methodist Episcopal Church and had noted that the women made deep sacrifices and had little funding to continue their ministries. Chautauqua seemed to be an ideal location, in his mind, for a place for them to recharge without other responsibilities.

Although he passed away before the building was finished in 1917, the home was still dedicated to the memory of his wife, Aurilla Scott, and mother, Sarah Fenton. One hundred years later, it still stands as a refuge for deaconesses, although their male counterparts — called home missioners — are welcome, too.

Jo Sheetz, who has been hostess at Fenton Home for four years, said she became a deaconess because she wanted to do ministry but didn’t want to be ordained. Fenton Home is for deaconesses and home missioners of the United Methodist Church, who choose their own ways to serve in whatever fields they desire. What connects them is the network provided by their brothers and sisters.

“I could have a voice in the church that was louder than just mine,” Sheetz said.

Sheetz’s ministry is working with the poor and homeless in Atlanta through councils and her church, and by helping people with low incomes prepare their taxes. Some of her peers work with refugees and immigrants, while others are teachers and firefighters. The entire group, which includes about 200 people, support one another through challenges, Sheetz said.

The Fenton Home is a conduit for that, which Sheetz refers to as a “covenantal community.” Not only do deaconesses come to the home to relax, they are also able to discuss their ministries with their peers. There will be an open house from 4 to 6:30 p.m. Sunday at Fenton Home, Sheetz said, so that people can see where this all takes place.

Jared Jacobsen, organist and coordinator of worship and sacred music, said he was impressed by the hard work of the group. The program on Sunday will include Methodist hymns, to honor Fenton and the group’s denomination, as well as more modern works.

Jacobsen explained that he thinks celebrating anniversaries at Chautauqua is important, which is why he wanted to do this service, and has learned a lot in the process of planning.

Chautauquans will also be able to learn more about the group’s work. Jacobsen said the service on Sunday will include a Q-and-A session with a group of deaconesses and home missioners who work around the world.

“In the process of telling the story of the bricks and mortar of the house, we’re also going to be able to tell the story of the people for whom it was built,” Jacobsen said, “and the fact that these are servants … to God.”