Geoffrey C. Kemp will facilitate the third and final Middle East Update of the season at 3:30 p.m. Wednesday in the Hall of Philosophy. He will be joined by both Shai Feldman, Judith and Sidney Swartz Director of the Crown Center for Middle East Studies at Brandeis University, and Ghaith al-Omari, senior fellow at the Washington Institute for Near East Policy.

After exploring the existential fears of the Israelis and Palestinians on Monday and Tuesday, respectively, the three will come together in conversation Wednesday to turn their attention to the contemporary Arab-Israeli conflict.

Kemp, senior director of Regional Security Programs at the Center for the National Interest, said he hopes to cover everything from the most recent events in Jerusalem, to the role of Iran, to the growing interference of Turkey in Middle East affairs, as well as the current relationship between Israel and some of the more conservative Arab states.

“We only have an hour, so we’ll have a lot of talk about,” Kemp said. “Of course, we will get around to … discussing the wisdom of Jared Kushner and what he brings to the table, and whether the Trump administration has any hope in hell of doing anything more than the other administration has.”

Al-Omari, who has been offering the Palestinian perspective this week, believes that the United States has to lead any opportunity to reconcile the conflict.

He believes the challenge the United States faces is how to lead without monopolizing the situation.

“Leading is not monopolizing,” al-Omari said. “Leading entails, ‘How do you mobilize our allies to use their value … in order to give the Palestinians assurances that they need?’ ”

This problem has troubled all previous U.S. administrations, but al-Omari believes the region is currently eager for the United States to reassert its leadership role in the area.

“This gives (President Donald Trump’s administration) …  the ability to go out to … the Saudis, to the Jordanians, to the Egyptians (and say) ‘We expect you to play a role, if you want us to lead the region, you also have part of the homework to do’ — which is to engage positively in working toward (peacemaking),” al-Omari said.

However, al-Omari recognizes that Trump faces some challenges unique to his administration.

“We see a lot of … disorder in the way that American foreign policy is being managed — a lack of clarity of who’s in charge of what, a lack of staffing, a lack of the tools that the U.S. will need in order to manage such a complex negotiation; but also to manage the regional context in which this conflict is taking place,” al-Omari said. “Until we in the United States put our house in order — in terms of how we’re managing our foreign policy — we will continue to be sometimes blindsided, as (with) what happened in recent weeks around Jerusalem.”

Events in Jerusalem concerning the Al-Aqsa mosque — a contested and volatile holy site, which is revered by Jews as the Temple Mount and by Muslims as the Noble Sanctuary — have further strained relationships in the region, according to The New York Times.

“Jordan, the custodian of the Aqsa shrine in Jerusalem, helped resolved the crisis involving the mosque, set off when Israel placed metal detectors, cameras and other security measures at entrances to the compound,” the Times reported this week. These measures were in response to the shooting of two Israeli police officers by three Arab citizens of Israel on July 14.

In regard to the United States’ involvement in the area, Feldman believes that Trump’s administration shows potential but faces many challenges — some of which are new and unique to his administration, but many of which every president before him has also faced.

“On the Arab-Israeli conflict … (Trump) came in with a positive image/vision … to make the deal that had essentially eluded all his predecessors,” Feldman said. “So it seemed, at least in the beginning, that he was almost very ambitious to prove that he will succeed where his predecessors (have failed).”

Feldman said when Trump first came into office, he “talked about making the ‘bigger deal,’ (which) involved not only Israelis and Palestinians, but also Israel and its neighbors.”

“It seemed like he was talking about a regional deal — a deal between Israel and (Palestine) and key Arab countries,” Feldman said.

However, he said, he worries that Trump underestimated the complexity of the situation.

“I think that basically Trump’s problem is that he came into office believing that things are much more simple than they really are,” Feldman said.

Feldman does not believe that the United States needs to be the only country who could resolve the conflict. He is hopeful that a resolution can be orchestrated by a handful of regional countries — given the recent unity seen between Saudi Arabia, Egypt, Jordan and the United Arab Emirates in their recent efforts to compel Qatar to “make a decision as to what its priorities are in terms of supporting Arab groups like the Muslim Brotherhood and others.”

“It’s possible to imagine this kind of a coalition playing the role which it has not until now done — in taking a kind of united position (and) presenting Israelis (and) Palestinians with … an offer they can’t refuse,” Feldman said. “I can imagine a situation like that, in which the … Arab countries substitute for the role that traditionally the U.S. has played.”

The problem with this scenario, according to Feldman, is whether the Israel-Palestine issue is a priority for these countries, and whether they can “manifest the sustainability that is needed to push forward such an initiative, and stay with it for as long as it takes to persuade Israel and the Palestinians to open a new case.”

“(This possibility) opened because of changed conditions in the region over the past few years, but the demonstration that something like that is not impossible is something that evolved over the last few months,” Feldman said.

In terms of what Palestinians would like to see in the future, al-Omari believes one has to look at what the Palestinians want for themselves, as well as what they want to come from the conflict.

“From the conflict, I think it’s clear that the majority wants what we call a two-state solution — the creation of a Palestinian state outside the state of Israel — two states, living together in peace, security and dignity,” al-Omari said.

He said that although many Palestinians would like to see all of historic Palestine regained and view the two-state solution as a compromise, he believes the majority also understand that a two-state solution is a realistic objective and solution.

“I think it’s a complex situation,” al-Omari said. “There are both internal aspirations of having a dignified future, a dignified state, and an external aspiration which is having a two-state solution and a peace deal which will give them … what they feel are their rights.”

On the Israeli side, Feldman defines three different camps of people with divided ideals of what they want.

The first is a group of Israelis who believe that resolving the conflict is essential to preserving Israel as a Jewish and democratic state.

“Those Israelis believe that a resolution that would allow the … Palestinian state to evolve is essential to … maintain(ing) Israel as a Jewish and democratic state,” Feldman said. “(This) is to say, a state that has a clear majority of Jewish population and does not hold any other people under its control without political rights.”

According to Feldman, these Israelis are willing to “take the risks that are involved in an ultimate deal with the Palestinians.”

However, another camp of Israelis are committed ideologically, religiously and historically to what they perceive as Israel’s historic rights.

Feldman said these Israelis “reject the idea of (trying) to reach an accommodation with the Palestinians.”

The final group of Israelis that Feldman identifies are “people in the middle, who are not ideologically committed to keeping control over the land on which Palestinians currently lie, but for whom personal safety and security is more important than preserving Israel’s character as a Jewish and democratic state.”

“These people … right now are reluctant to take the risk, (to) pay the cost of an accommodation with the Palestinians,” Feldman said. “They’re basically guided by … fear of the possible consequences of making the concession of withdrawing from the territory that Israel now controls.”

Feldman said this group is first and foremost guided by fear.

On this, Feldman and al-Omari are in agreement. Al-Omari said that a successful resolution to the conflict will only be reached if the influence of countries like Iran, who al-Omari believes “thrives on instability,” is made insignificant.

“If we have leaders that are propelled by fear, and the environment provides good reasons to fear, then we are looking at a period during which political leaders would talk more about fear and about threats than they will talk about positive images,” Feldman said. “That’s a recipe for paralysis.” 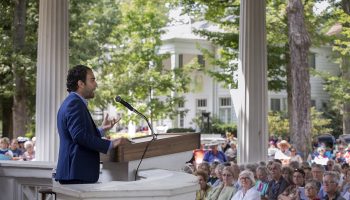 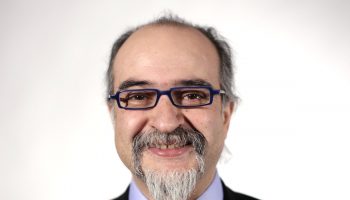 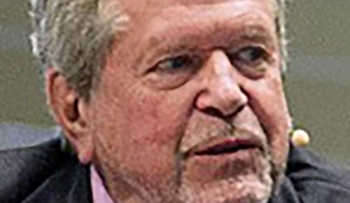 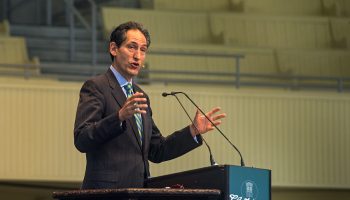