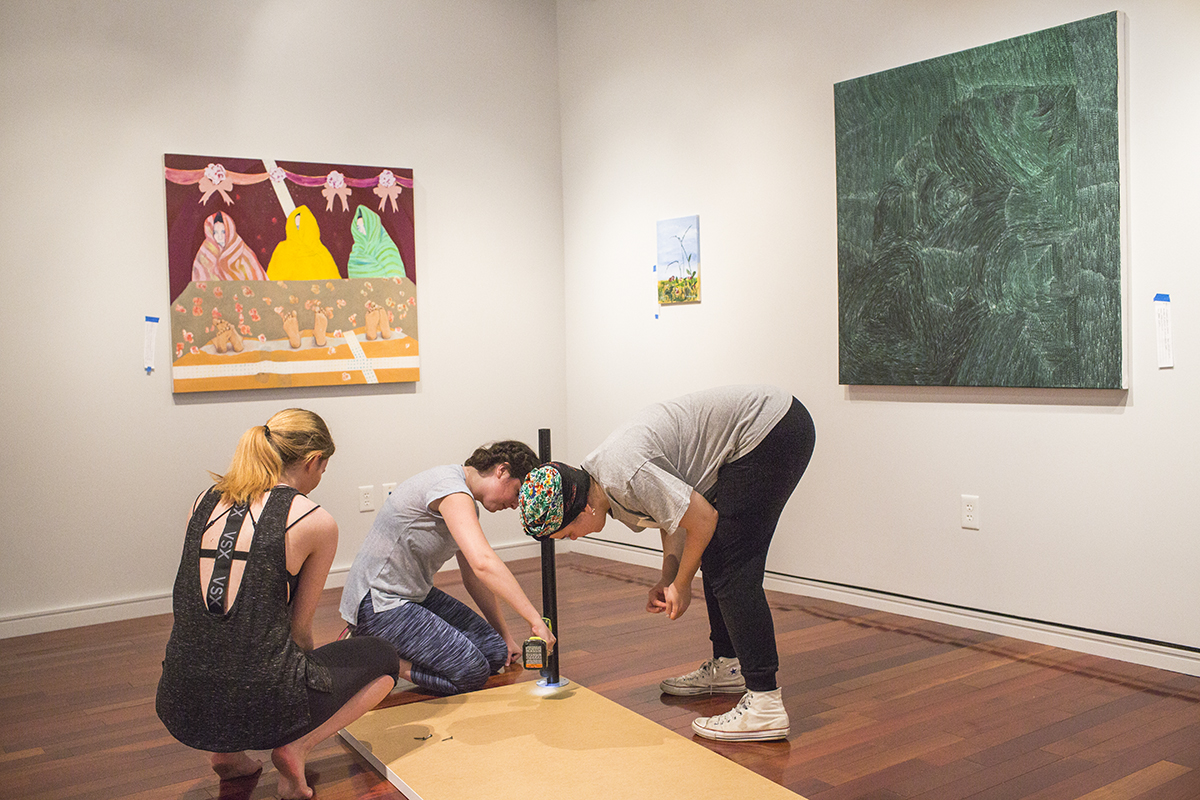 Unlike art exhibitions organized around a predetermined theme, the defining characteristic of the VACI Open Members Exhibition is simply that the artwork be that of exhibiting members of VACI Partners.

This year, more than 30 members submitted pieces for the annual show, which holds its opening reception from 3 to 5 p.m. Monday in the Fowler-Kellogg Art Center. Members may submit up to two pieces and are guaranteed to have at least one in the show, which continues through Aug. 23.

Katherine Galbraith, who has been an exhibiting member for four years, sees Partners as an organization with a purpose.

“It’s a good community arts program that’s interested in young people and advancing the arts,” she said. “It’s a wonderful thing to have.”

This year she submitted two figurative oil paintings, “The Guitar Player” and “Portrait of the Golden Girl,” for the members exhibition.

Galbraith started drawing at about age 5 because her mother didn’t have enough time to make her paper dolls.

“So I decided I’d make my own,” Galbraith remembered. “I’ve been drawing ever since.”

Primarily a portrait painter, she also does some landscapes and still lifes.

Judith Olson Gregory has been a member of the Partners for as long as she can remember. In fact, she remembers when VACI was CCVA — the Chautauqua Center for the Visual Arts, of which she was president from 1999 to 2001. She’s been happy to see the growth of the visual arts at Chautauqua over the years.

“After all the work we’ve done,” she said, “we want to keep it going.”

For the Open Members Exhibition, she submitted a piece titled “Alternative Truths.” Made from homemade paper, used tea bags, acrylics and wire, the words “I” and “Do” are overlaid across the piece. The piece is politically inspired in its ambiguous phrasing – the repeating words can read be either “I do, I do,” or “Do I? Do I?” she said. With “Alternative Truths,” she said she questions the veritability of what we are hearing.

Like Gregory, Subagh Singh Khalsa remembers when VACI had a different acronym. He once helped set up chairs at a CCVA gallery event. A week later, he was invited to be on the CCVA board of directors.

“I guess they figured (since) I volunteered for that, I might as well serve on the board,” he said.

“My whole life I’ve been a maker of different things, even when I was a really little kid,” he said.

He had a formative artistic experience in seventh grade, when he made a sculpture and “got totally absorbed in the process of it.”

“The making of things is very close to my meditation practice, and I feel it brings me closer to one of the things that makes humans human – the ability to make, to create,” he said. “When I make things, I really feel most connected to my humanity.”

Khalsa is looking forward to the members show opening.

“There’s lots of people and everyone’s admiring one another’s work,” he said. “It’s a real genuine community gathering, a time when you see people that you’ve known for years, and look at their work and enjoy each other.”

In a new addition this year, VACI Artistic Director Don Kimes and Judy Barie, the Susan and Jack Turben Director of VACI Galleries, will each display a painting as a show of support for other exhibiting members. This will be Barie’s first time showing a work in the VACI galleries.

“We want to show people what we do off-season, in our other lives,” she said. “We like people to know that we’re artists as well.”

Gallery: Children’s School participates in ‘Art in the Park’ event

Morning Worship: Sermons on the mound can lead to change, Hill says