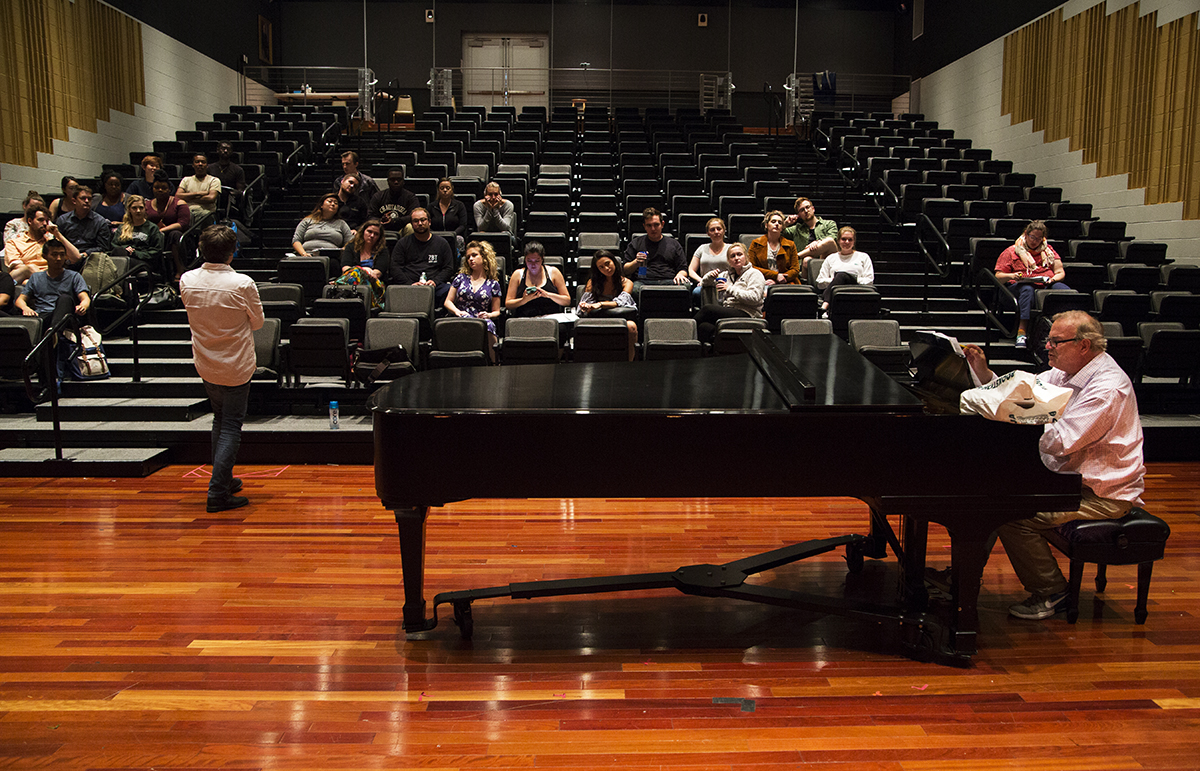 Stephen Sondheim once said, “Oklahoma! is about a picnic, Carousel is about life and death.”

In a performance of Rodgers and Hammerstein’s Carousel at 6 p.m. Wednesday in McKnight Hall, the Voice Program isn’t shying away from the dark elements engrained in the story.

“A show like this … brings up a lot about nostalgia in how we think about the past,” said Thomas West, who is playing Billy Bigelow in Wednesday’s performance. “Are we thinking about the past as it actually was? I tend to think that we don’t. We look at the past (through) a better lens than it actually was.”

The musical, which premiered in 1945, deals with sensitive issues, especially for modern audiences. In the show, Billy Bigelow hits his wife, Julie. Although the abuse is a crucial aspect, stage director John Giampietro said many audience members will “know every song by heart” and forget the abuse was ever in it.

The show deals with abuse in a way that might seem outdated to modern audiences.

But Niles doesn’t see Julie as a weak character.

“A lot of times in productions, she’s portrayed as a weak woman who is very giving to Billy,” Niles said. “But it takes a lot of courage to share your soul and your vulnerabilities, and for that Julie is strong. Strong enough to be there for Billy.”

Giampietro said that they’re not “forgiving or making excuses for Billy Bigelow’s character,” but rather showing the story of how a victim deals with her abusive husband. He said they’re highlighting Julie’s strengths throughout it all, instead of “glossing over” the abuse or dismissing it by saying “Well, it was a different time.”

West said that playing Billy has been the biggest challenge in his singing life so far. West believes that human beings are capable of anything, and in order to get into Billy’s head he had to find the hypothetical trigger point that would make him able to slap someone.

“He’s kind of a live wire that when it gets dipped in water, fizzles, and he has these jolts of energy all the time,” West said. “He can’t control his emotions. I think understanding those things about him have helped me get into his head and see how Thomas and Billy can become one for the show.”

It’s been more than 70 years since the show premiered, but West said “Billy’s character is still out there.” He said the first thing he thought when he looked at Billy as a character is that “men still hit women.”

West is right. According to the National Coalition Against Domestic Violence, on average 20 people are physically abused by intimate partners every minute in the United States, creating more than 10 million abuse victims a year.

“I think it’s easy to forget that there are a lot of things that are hard to deal with in this show, and some things that we’re still fighting today,” West said. “Across the board in golden age musicals, there’s things we need to address.”

West said he sees the issue in two ways. On one hand, he said one can look back on the past to understand what issues were accepted. Even 20 years after Carousel premiered, abuse was still a normalized aspect of society — according to a Time magazine article from 1964, “wife beating” was seen as a therapeutic way to “balance out each other’s mental quirks.”

But on the other hand, West said, it’s important to perform these shows to make people aware that this is still happening now.

Giampietro said that there’s a “knee-jerk reaction” to not perform “musicals that are old fashioned or have outdated moral structures.” But he said it’s important to meet them head on, and explore the difficult topics through a younger generation of artists.

It’s the generation that, he said, will “hopefully change our behavior.”